‘Intentional Fire May Have Led To Dump Blaze’ 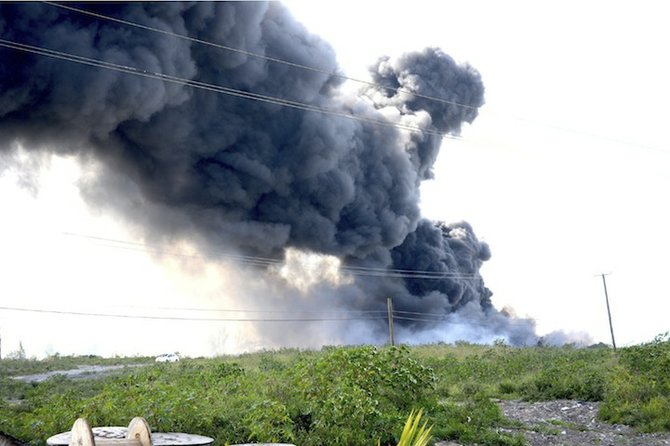 A FIRE at the City Dump, which yesterday intensified into a huge blaze creating thick, toxic smoke in the area off Tonique Williams-Darling Highway, might have been intentionally started, authorities said.

Residents in the surrounding communities, including the Tall Pines constituency, complained of the environmental hazard posed by the billowing smoke which could be seen for miles.

They also expressed frustration with the frequency with which fires break out at the City Dump.

One resident of the area called the City dump “a poor way to deal with our waste.”

“This is not a landfill, this is a garbage dump,” he said.

“We need to look into recycling and reusing these things rather than just bringing it here,” he said.

In a press statement, Minister of Environment and Housing Kenred Dorsett, said: “Initial reports lead us to suspect that tyres were intentionally lit in the early morning hours.”

Fire Chief Walter Evans said authorities received reports about the blaze not long after they had extinguished an unconnected fire at the City Dump early Friday morning.

He said when they arrived on the scene shortly after 7am, authorities found a mountain of burning tyres separated from other debris.

Heavy duty tractors from the Department of Environmental Services assisted firemen in extinguishing the fire, he said, later adding: “The fire has dissipated and is no longer in the free burning phase. It is now in the smouldering phase.”

Although he added that the fire “could be in the smouldering phase for probably another day or two,” Deputy Director of Environmental Services Thomasina Wilson said the fire could be in that stage for another three to five days before being fully extinguished.

“It’s a lot of oils, petroleum and stuff in tyres,” she said.

Noting that the wind seemed to be directing the smoke from the fire over to the northern section of the island, she said: “Nothing can be done about that.”

Describing the fire as “intense,” she added: “Anytime you have rubber burning like this, it takes three to five days to actually get it out.”

She said authorities are “soaking the fire from the bottom,” hoping that it will “eventually burn itself out.”

Mr Evans added that although yesterday’s fire might have been bigger than other fires at the City Dump in the last few years, it is unlikely that the fire will smoulder on for weeks like previous ones did.

“This may have been bigger than the other ones, but the depth of the other ones was significantly greater. They were taking place underground.  We don’t anticipate that this will be burning underground,” he said.

Mr Evans said authorities have not yet identified an official cause for the fire.

He also explained that in trying to extinguish the fire, firemen had to pay specific attention to an electrical high power line which comes from the Clifton power station.

Mr Evans said firemen were “alerted to the importance of that line and how it services the nearby areas.”

“If that line was disrupted,” he said, “a significant number of areas in the southern Bahamas might have been adversely affected.”

“We deployed a unit to ensure the fire did not compromise the integrity of that line or disrupt services,” he added.

An experience fireman will tell you that "smoldering phase" will not last "days", but rather weeks and even months, unless thorough turning over and dousing of entire area is done over the course of days. Covering smoldering fires only increases the likelihood of more smoldering, smoke and eventual relighting of the fires....And what does "soaking the fire from the bottom" actually mean? Ignorance of fire management is amazing....

when will the Bahamian government leaders take this as a serious problem to the health, well-being of it's people and the world in general? In addition, this smoke flows to other countries too. Poor "world partner".....2nd world country, trying really hard to be a 3rd world country.....

Most countries try some form of recycling of these types of materials....but not here for some reason!

The Bahamas is charging the Cruise ships a fee per ton to dispose garbage (tipping fee). That fee is way below what they would pay in Miami or FLL. So again, the accounting for the Govrnment only has a revenue side, they don't care about a proper handling of garbage once on Bahamian soil. Am sure the people setting this on fire get paid by the Government.

Internet chatter is already discussing the excellent view and smell of the Nassau public dump that will exist from many of the south facing BahaMar hotel rooms and condo highrises to come in the Cable Beach area. I bet the Chinese financiers of BahaMar never fully appreciated the extent to which their lendings will be put at risk from the toxic smouldering fumes of the Nassau public dump that have plaqued the Cable Beach area for many years now. The most polluted city in China has less toxic air than our public dump. What fools!

well that's good then, so the Chinese that will be on vacation in Nassau will not suffer cold turkey.

Not only is it an annoyance with irritated eyes and lungs, but also a major health issues for the elderly, children and persons with breathing issues....which apparently the Govt, could care less about! And don't even bring up the poisons that are released through the burning rubber, plastics and medical waste when these fires start....but hey, it's always "someone else's" issues, right Mr. PM?

It is a National disgrace that the city dump should be allowed to so frequently belch its noxious fumes across the island of New Providence. Both FNM and PLP governments have been negligent in allowing this island to be blighted by this poorly managed dumping ground. There needs to be a total rethink about how the country deals with its waste - the status quo is simply not acceptable.