Sheniqua Ferguson misses out on final 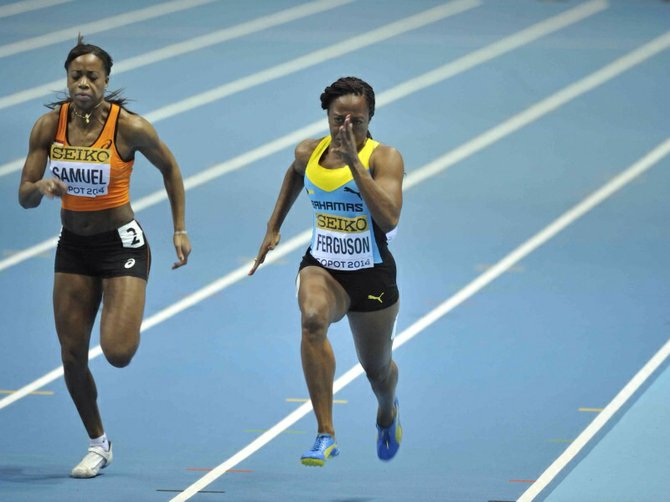 SOPOT, Poland: Sheniqua 'Q' Ferguson's bid for a shot at the women's 60 metres final came up short, but she will walk away from the International Amateur Athletic Federation's 2014 World Indoor Championship as the 14th fastest woman on the planet.

Ferguson, 24, earned that ranking after she placed fifth in the first of three heats in Sunday's semifinal, tying her season's best to 7.25 seconds. She missed the cut as defending champion Veronica Campbell-Brown of Jamaica took the final spot in 7.17 for third in the second heat.

"I feel really good. I had a much better race than yesterday, so I'm really happy with my performance," said Ferguson, who duplicated the same time and classification in her first round on Saturday.

"I wanted to make it to the final, but I can't be mad about a season's best. I know what shape I'm in. I just have to now get ready for the outdoor season. So I'm pleased with my performance here."

As she made her exit, Ferguson brought the curtain down on the three-day global championship for the Bahamas, a winner of two medals, thanks to the back-to-back bronze and silver feats by Shaunae Miller and Chris 'Fireman' Brown in the women and men's 400 metres respectively on Saturday.

While the world got to see the introduction of 19-year-old Miller on the podium for the first time at the elite stage after a stellar junior career, Brown proved that he's still a contender, even at age 35 as he picked up a historic fifth medal, becoming the only man to win gold, silver and bronze, the latter three times.

The stage is now set for the outdoors and obviously the focus will be at the Thomas A. Robinson National Stadium as the IAAF brings the action to the Bahamas for the inaugural IAAF World Relays from May 24-25.