Video: Feeding Over 100 On Mother's Day 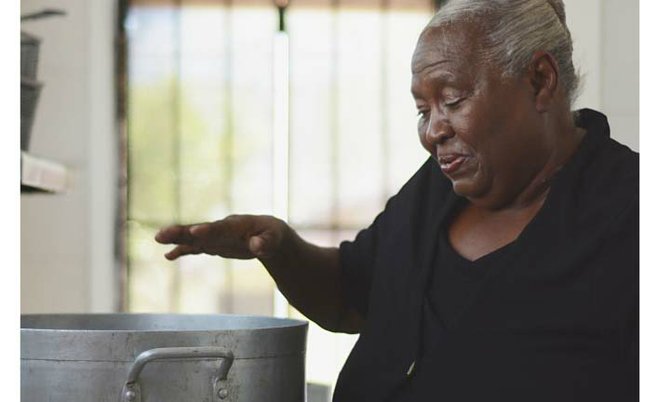 LIKE most mothers, 74-year-old Ruth Darbouze is looking forward to spending Mother’s Day with her children and extended family. But while many mothers claim that day as one to put their feet up and relax, the matriarch of Fort Fincastle, as she is known, is excitedly planning the Sunday dinner she will be cooking for at least 100 people out of her home on Mullings Street.

“I will be preparing a roast, chicken, fish, crawfish, conch, peas-n-rice, tossed salad, pork chops, ribs, macaroni and potato salad. I love to cook and I want to be the one to prepare the meal for the day for my family and friends. I don’t need the day to rest, it is a labour of love.”

In fact, more than a labour of love. Mrs Darbouze says it is her calling to feed the hungry in and around her community.

“It was about 10 years ago that I had a dream, or I guess a vision, to cook some soup and take it to the needy in the Kemp Road area. I knew that it was what God wanted me to do, so I made some soup and some souse and we went around the Bain and Kemp Road areas to feed the needy on a Saturday morning and it was so well received that I started doing it every week,” the retired school janitor told The Big T.

She continued her soup drive until her mother became ill and needed to be taken care of. After her mother’s death, the Saturday soup meals became Sunday dinners.

“Every Sunday, I cook and anyone who is in need of food can come and get a plate. It doesn’t matter who you are, my door is open to you. People in the neighbourhood know that that is one day they can come and be fed, and we have people who don’t live in this area but who will call and ask and we will pack it up and send it to them. I would say we do at least 100 plates of food each week.”

Mrs Darbouze, who does this out of her own pocket, said it is an essential part of her Christian duty.

“People are hungry, and I saw the leftover food my children would have and I said why not use this as a way to help people. If you can help someone as they cross along the way, then your living will not be in vain. The smallest grain can help someone,” she said.

Giving The Big T a tour of her immaculate and extremely organised kitchen, Mrs Darbouze explained that her preparations for Sunday dinners begin with a grocery store run on Saturday.

Then the devout Catholic will prep all her meat before attending mass at St Francis Xavier Cathedral.

On her return, she said, she will season the meat and do more preparation work on the rest of the dishes. On Sundays she usually is up at 7am to finish the cooking before mid-afternoon.

With the special menu she has planned for Mother’s Day tomorrow, Mrs Darbouze said that she will probably get up at 4am to ensure everything is ready.

“I just love to help others. And when I cook, I cook with love in my pot. Love is what makes the food taste good. How do you expect your food to taste right if you don’t praise God as you are cooking it and you don’t put love in it.

“That is one of the reasons that we have the problems that we have today, because our children are not being raised in love. The parents don’t know how to show them love.”

That's one big pot Mrs Darbouze! Happy Mothers Day, I hope God gives you many more to spread happiness to all the people you serve.

May GOD continue to bless you for you have done well. Keep up the good work.