'Masons Must Speak Up On Crime' 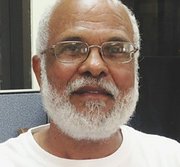 A FREEMASON believes that his colleagues should be more vocal on the escalating crime and violence threatening the Bahamian way of life.

Speaking to The Tribune yesterday following his successful civil action in the Supreme Court seeking redress for his suspension and expulsion from the Prince Hall Grand Lodge, Eugene Nairn said that the current crime situation in the Bahamas “is terrible.”

“My family were victims of crime,” he said, “there was an attempt to take my son’s life because he was driving a car. He’s now paralysed from gunshot wounds, ok? And this made a 180 degree turn for my family in June of 2012.”

In response to the number of murders in New Providence over the past few weeks, the Royal Bahamas Police Force conducted several walkabouts in inner city communities with the latest yesterday afternoon in Mason’s Addition.

Superintendent Stephen Dean, director of the Crime Prevention Office, said the walkabout was intended to reassure residents in the area of the police’s commitment to reduce crime.

Prime Minister Perry Christie recently said the government is developing new crime fighting strategies to win the “war” that they are fighting against “hostile young men” in the capital.

Mr Christie said he has had several meetings with high ranking officers of the Royal Bahamas Police Force in the hopes of developing new, more effective methods of “curbing, stopping and eliminating crime”.

The Prime Minister also admitted that certain things that could have been done to fight crime have not been done, but he said the Minister of National Security, Dr Bernard Nottage, is working “with due speed” to execute these schemes.

Mr Christie also said that the government is open to suggestions and is considering all crime fighting strategies that have been presented to them and that crime must be a comprehensive effort, not just by the government, but by the country, the church and the NGO’s.

Regarding the crime problem, Mr Nairn said yesterday that he would “like to see Masonry make a statement.”

“These are men who are heads of families but there is no statement whether they might be behind closed doors but there are no statements coming from any of the organisations to see how we could assist the young men in our country to refrain from violence.”

“We have to see what we can do. How can we assist any other organisation? For masonry in the past, people looked up to these men. They thought it was something prestigious to be in and as they parade through the streets, we used to line off on the streets watching the Masons pass and making positive remarks about wanting our children to be successful like them.”

“But you don’t hear these things anymore,” Mr Nairn said.

yes, no one looks up to freemasons anymore because they have been exposed for their satanic rituals and practices under the pretense of doing good for society. So put a sock in it and get lost, freemasons!

I couldn't have said it better hurricane.

Most masons don't make it past 3 degree so they don't know the workings of the hierarchy of the organization that a number of its own leaders declared as satanic, or in service of the devil. Masons are also connected with the illuminati who have plans of mass genocide and the New world Order: (Excerpted from Chapter 13: USS Persian Gulf: Big Oil & Their Bankers…)

While the global elite construct underground bunkers, eat organic and hoard seeds in Arctic vaults; the global poor are being slowly starved thanks to high commodity prices and poisoned with genetically modified (GMO) food. Austerity measures aimed largely at the poor are being imposed on all the nations of the world. Weather events grow more deadly and brushfire wars more frequent. An AK-47 can be obtained for $49 in the markets of West Africa. The depopulation campaign of the inbred Illuminati bankers is accelerating."

They are behind the plans to legalize drugs as a form of mind control where they can have the youth stoned out of their minds when they put their plans in place to take control.

Wow, what an incredible imagination you have.

John - something has to be done about the world's expanding population. People won't exercise proper family planning - and in recent years in the USA the conservative Christian "right" has been very very very very busy gutting any programs that are in place to help the poor plan their families within their means.

Where is the church on this issue? Nowhere. They don't want to talk about sex - except to say it is between a husband and wife and the husband can do whatever he feels like. As far as teen pregnancy etc - they just talk about abstinence. That's like saying we can avoid all traffic deaths and injuries by everybody abstaining from driving a vehicle. THEY ARE RIGHT. If people abstained, there would be no teen pregnancy. It is also true that if none of us drove cars there would be no traffic fatalities. But neither idea sits well with reality or practical common sense.

Should I mention Jesus and Mary Magdalene? No, of course I shouldn't.

The church has been avoiding the discussion for hundreds of years, and things just keep getting worse. Unless the church wants to allow people to talk about sex and view it as something not of the Devil, then other measures have to be taken to curb the population explosion problem.

I am not a part of any of these groups, but I can understand their motives.

QUESTION: So why are the Freemasons allowed to hold religious services in Baptist and Anglican churches ?????????? Are these churches dabbling in the occult????????

Who cares what Free Masons or the church think? They're both antiquated organizations (dare I say cults?) MadHatter is spot on and John is out to lunch...