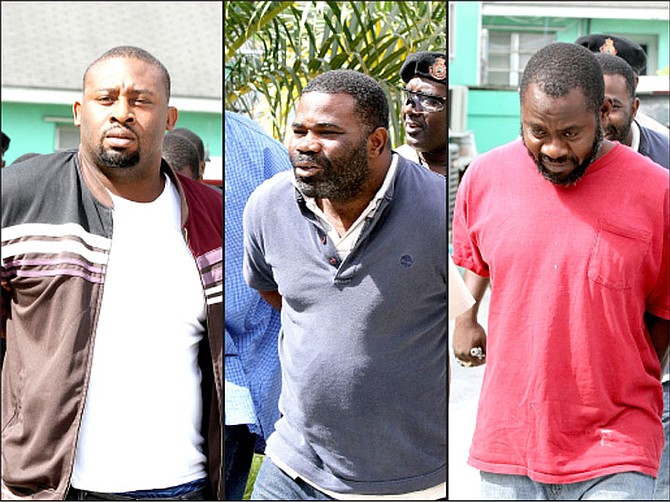 THREE men were arraigned in Magistrate’s Court yesterday in connection with the seizure of over $600,000 worth of marijuana over the weekend.

Jarius Bowleg, 46, Shelton Bodie, 43, and Kirk Moss, 32, pleaded not guilty to possession and conspiracy to possess dangerous drugs with intent to supply when they appeared before Chief Magistrate Joyann Ferguson-Pratt.

Bowleg and Moss were additionally charged with a count each of conspiracy and possession of dangerous drugs with intent to supply stemming from the November 1 raid in western New Providence.

On the day in question, DEU officers observed a suspicious vessel in the Coral Harbour area and a group of men off-loading a number of bags during a special operation.

Officers also checked out the vicinity and uncovered more bags concealed in a nearby van.

The total weight of the drugs is more than 600lbs.

The accused, having pleaded not guilty to the charges, will stand trial on March 24, 2015.

The men no longer face a mandatory minimum sentence of four years if convicted as the sentencing law was declared unconstitutional in September by then Supreme Court Senior Justice Jon Isaacs.

While the magistrate’s discretion in sentencing matters has been restored, she does not have the discretion to consider bail.

She remanded the men

to prison and advised them of their rights to apply

to the Supreme Court for bail.