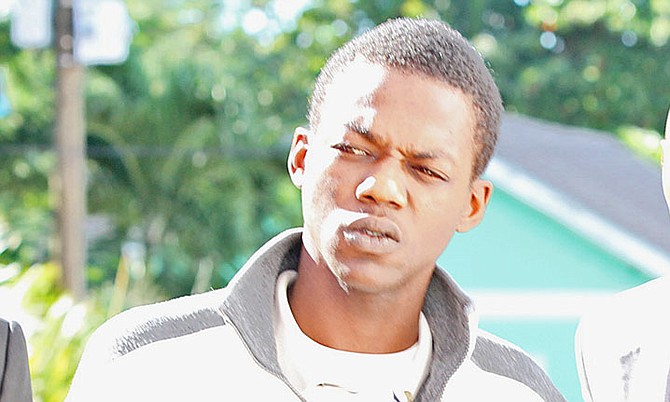 Tiano d’Haiti, 23, who is accused of the murder of Glenn Cartwright. 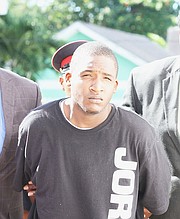 Kevin Andrews, 24, of Montell Heights, who is accused of being an accessory after the fact.

A MAN accused of the recent home invasion and murder in Blair Estates was remanded to prison yesterday with a second man alleged to be an accessory after the fact.

Tiano D’Haiti, 23, of Thompson Lane appeared before Chief Magistrate Joyann Ferguson-Pratt facing a count each of burglary and murder stemming from the October 28 death of Blair resident Andre Cartwright.

D’Haiti is accused of breaking into the home of Glenn Cartwright, 44, and killing him.

Kevin Andrews, 24, of Montell Heights, was charged with being an accessory after the fact.

Prosecutors alleged that Andrews, knowing that D’Haiti had committed murder, helped him evade the law.

Neither men were allowed to enter a plea to the charges as the matter is to be fast-tracked to the Supreme Court on January 16, 2015 through presentation of a voluntary bill of indictment.

D’Haiti’s lawyer, Glendon Rolle, claimed that his client was beaten while in police custody.

The chief magistrate noted the complaint before remanding the pair to prison.

Andrews is scheduled to reappear in Magistrate’s Court on November 20 for a bail hearing.

D’Haiti was charged with murder under Section 291 (1B) of the Penal Code, Chapter 84. A charge under this section does not attract the death penalty.

According to amended law, Section 291 (1A) notes the death penalty can be applied if the offence of murder is committed in the process of committing a felony.

Cartwright was at his Blair Estates home around 1:40am, with his mother and father, when three men kicked in the front door of the house.

When he heard the noise, Cartwright got his licensed shotgun and went to investigate, police reported. He encountered the three suspects, one of whom was armed with a handgun.

There was a brief exchange of gunfire, which resulted in Cartwright being shot multiple times. He died at the scene. One of the suspects was also shot, however, he and the other men escaped in a silver coloured Honda Accord.

On Monday, police arrested five other people in connection with the murder.