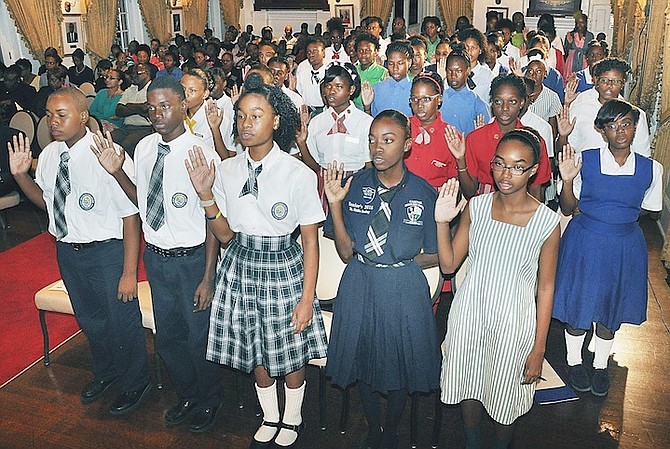 FORTY-six tenth grade students from 14 New Providence high schools have been inducted into the Future Teachers of The Bahamas programme with hopes that they will be the potential 2017 intake at the School of Education at the new University of The Bahamas.

The students, representing seven government and seven independent schools, are the latest to join the Teacher-Cadet programme, which was established in 1995 “in order to meet the increasing shortage of skilled teachers in critical areas”.

CV Bethel Senior High School put forward the largest cadre of students from public schools with seven inductees; Queen’s College has the largest from the independent schools with four. Nine of the inductees are aspiring Mathematics teachers, eight hope to pursue Primary Education, six have expressed an interest in Early Childhood and five for both English and Science. Other preferred subjects include Accounts, Business Studies Family/Consumer Science, Music, Spanish and Special Education.

Angela Pratt-Rolle, Under Secretary of the Ministry of Education, Science and Technology, told the inductees as well as this year’s cadet graduates to always embody a spirit of excellence. She began by reminding them that “theirs is an awesome responsibility” as future teachers because they will play an important role in shaping the future of the country.

She likened the students to artists and told them that as educators they “will shape minds, paint hearts with a passion for learning, mould character, sketch dreams and help create the architectural blueprint for the development of our nation’s youth.” She stressed the importance of never settling for mediocrity and that in choosing excellence they must also choose to be life-long learners.

Mrs Pratt-Rolle also introduced the new inductees to Bloom’s Taxonomy and assured the graduates that if they had not already been introduced to it at the College of The Bahamas that they soon would. She told the aspiring teachers that “three of the most powerful things they could possibly possess are wisdom, knowledge and understanding,” noting that “when they are able to use these as tools in their daily lives, they will become a seamless inclusion in their lessons and their lives as educators.”

Mrs Pratt-Rolle also spoke of the nobility of the teaching profession asserting that “your choice of a career is by far the most valuable and important career there is. While you may not be paid lavishly, the return on your investment will be manifested in the lives you empower.” She advised that their gratification would be in seeing their pupils succeed.

“You will help to create future surgeons, lawyers, accountants, entrepreneurs, physicists, chemists, computer engineers, agriculturalists and every career imaginable. Teachers give what cannot be taken away – a wealth of knowledge and information that once you acquire, will remain yours for a lifetime,” she said.

The 23 graduates who matriculated in the College of The Bahamas were also highlighted and awarded for their successful completion of the three-year Teacher-Cadet programme.