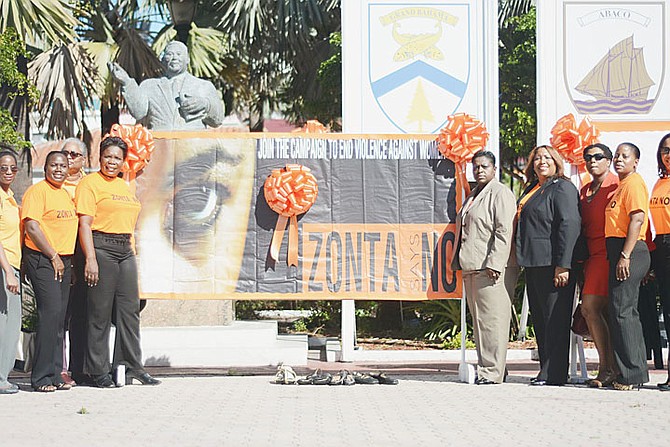 CHILD abuse may be a major determining and contributing factor to the “ugly scourge” of domestic violence in the country, Social Services Minister Melanie Griffin said yesterday.

Mrs Griffin made her comments during the launch of a campaign to raise awareness about violence against women, coordinated by her ministry and the Zonta Club of Nassau. The campaign was launched in Rawson Square yesterday morning.

Her comments also came a week after 21-year-old Carmin Jean was stabbed to death during a domestic dispute with her boyfriend, just hours before she would have celebrated her 22nd birthday.

Mrs Griffin said the level of child abuse in the country, some “500 to 600 (reported) cases a year,” are indicative of the “incidents of violence in the country.”

She also said the government is preparing a report for retired Justice Ruby Nottage, chair of a local task force, describing “where this country needs to go with regards to fighting this ugly scourge.”

“Children do what they learn,” she said. “We see it over the years. If there’s no intervention in the lives of those children who have been abused, whether it’s neglect, physical, sexual, whatever it is. We see it over the years. If there’s not that intervention that they need to help them, then you will see that it goes throughout and stretches its ugly wings throughout the country. Children, as adults, they begin to respond in violence instead of responding with love. We have to be able to put in place programmes to deal with that.

“Violence has been a very present part of families, and I can say that because of the level of child abuse that we see in this country. When you have a level of child abuse anywhere from 500-600 cases a year, and that is only reported, then it tells you the incidents of violence in the country.”

There have been several reported cases where domestic disputes turned fatal.

In 2011, Prince Hepburn was accused of killing Nellie Brown-Cox, his girlfriend.

Brown-Cox was found dead in the kitchen of an apartment on Bougainvillea Blvd, South Beach, with multiple stab wounds from a cutlass.

Hepburn was convicted of her murder.

In 2012, 20-year-old Anthonique Hunter was stabbed to death during a domestic dispute a day before she turned 21.

Yesterday, Mrs Griffin said the number of reported cases of domestic violence, particularly against women, have been a concern for the government “for quite a few years.”

“The ministry is concerned, the government is concerned, and I can tell you, right now we have a very rough report from our task force to end gender based violence, which is being chaired by retired Justice Ruby Nottage,” she said. “We expect to have that report finalised in short order, when we will also prepare a strategic plan and then have an action plan prepared as to where this country needs to go with regards to fighting this ugly scourge.

“That task force has been meeting just over a year. What they have been doing is looking at the root cause, because for too long we’ve just been dealing with the symptoms. We want to be able to prevent, so they’ve been looking at the root cause, and from that report we will be putting in place programmes that will assist our country in eradicating or reducing this ugly scourge.”

According to Zonta Club President Marisa Mason Smith, the club in Nassau will continue campaigning against domestic violence against women for 16 days and end on December 10 with a big ceremony.

Yesterday was International Day for the Elimination of Violence Against Women. Activists have urged people to wear orange in observance.