Campaigner Calls On Pm To Live Up To His Words 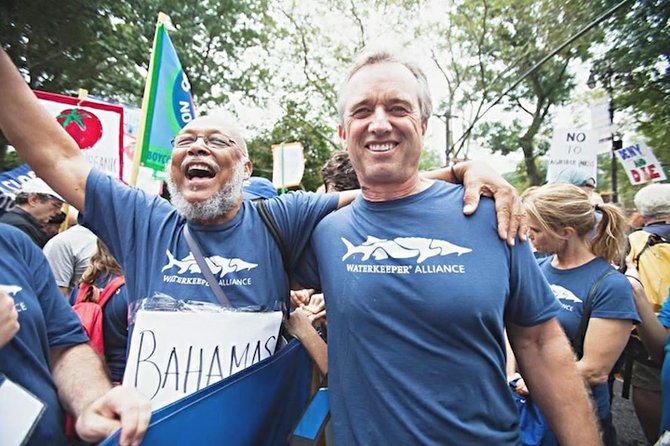 A LEADING environmentalist yesterday called the Prime Minister’s address to the United Nations Climate Change summit “disingenuous, claiming that more has to be done by Bahamians to reduce the threat in coming years.

Joseph Darville, Executive Director of the Waterkeeper Alliance in the Bahamas and Director of Save the Bays, told The Tribune that the environmental movement in the country needed to take a step forward in order preserve the Bahamian way of life.

Mr Darville called Perry Christie’s speech in New York last week “contradicting”. He said that comparing the Prime Minister’s words at the summit with his local environmental track record that it was easy to identify the duplicity in what he says and does. “His words come off as disingenuous because we heard what he said in New York, then we heard what he said in Bimini and other Family islands,” Mr Darville said.

“In Bimini, we see the indirect promotion of the destruction of our natural environment by supporting development. In Bimini, they bulldozed 163 prime acres of mangroves, they (developers) said that they served no purpose, but anyone that knows mangroves know the purpose they serve to land growth, marine growth and carbon absorption. When you view those two situations, you have to wonder.”

At the UN summit, Mr Christie urged developed nations to honour their commitment to pay $100bn a year by 2020 for climate change support. The Prime Minister said: “The Bahamas accepts the science on this issue. We have signed on to all the agreements, yet emissions into the atmosphere continue to grow. Every day the sea is rising, the coral reefs are dying; yet so far all the world has done is talk. The fact is that nothing the world has done so far has stopped this upward trend in global emissions.

“The Bahamas calls therefore for a sufficiently ambitious, comprehensive and inclusive, legally binding framework, with commitments strong enough to reverse present upward emission trends. The survival of small-island developing states (SIDS) must be the benchmark for the 2015 agreement.”

However, Mr Darville countered: “On one side, he (Christie) says he is supporting the movement to preserve islands like the Bahamas by preventing climate change and then on the other, we see the destruction of our mangroves, our coral reefs and our marine life everyday in the name of development and job creation.

“The Prime Minister has to examine his conscience, he has to look beyond the political machinery which dictates everything a politician does and look deep within his heart and act on those things he expressed at the United Nations.” Speaking directly to Mr Christie, Darville said: “Get in tone with the words you speak, you shouldn’t just say words without actions. It is dangerous, it is very dangerous because you are contradicting what is done in terms of what is said.”

Two weeks ago, Mr Darville attended the People’s Climate March in New York. The march - which attracted up to 400,000 people - was a demonstration by environmental organisations from around the world trying to bring awareness to the issue of climate change as the UN leaders preapred to meet.

He told The Tribune that he called for the country to step up and start to correct the “fixable” environmental issues that exist in and around the archipelago. “All around the world hundreds of thousands of people are demonstrating and bringing awareness of environmental issues and climate change around the world. They are informing their leaders that changes need to be made to improve conditions by 2100,” he stated.

Mr Darville explained that international environmentalists view the 2100 mark as a cut-off mark for improving the earth’s climatic condition. He said that there needs to be a conscious effort to make a drastic changes between now and then. “They understand that if changes aren’t made by then, the sea level will rise by seven to 25 feet and places like the Bahamas will be wiped out by the ocean. We are less than five feet above sea level.”

Mr Darville, who is also the educational director of the Youth Ambassadors, said that young Bahamians are key to this fight. He said that one of the reasons the gathering in New York was successful was due to a youthful presence: organisers of the march reported that over 50,000 college students participated.

“Young people are now becoming aware of what is happening to their planet,” Mr Darville said. “They are alarmed by what they are seeing. The demonstration was intended to send a message to world leaders that Mother Earth does naturally adjust itself, but we (humans) are speeding up that process with our environmental actions, with our human footprint.

“The Bahamas is the gem of Mother Earth - it is the only place in the world that reflects light back to space because of its natural aragonite. We are most certainly blessed; we need to get our young people to understand that. Then they will see the need to fight the way we see youth around the world march for this issue. Then we will be able to march on Parliament. When you mess with Mother Nature, Mother Nature will reclaim her own.”