'Tum Tum' Looks To Make A Name For Himself In Ncaa 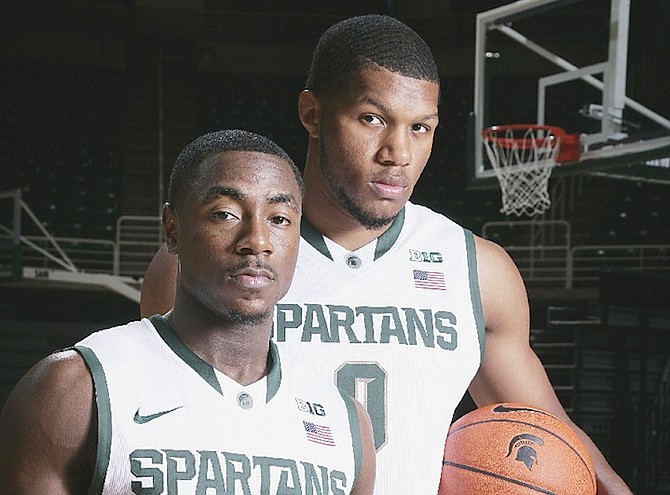 He has been highly touted with lofty expectations since he arrived in East Lansing, Michigan, and now Bahamian freshman point guard Lourawls “Tum Tum” Nairn is prepared to fulfil that promise.

Nairn was a popular topic of discussion as the Michigan State Spartans men’s basketball programme hosted media day this week.

His leadership skills on and off the floor have some of the traits that have led to Nairn having an immediate impact on the Spartans and iconic coach Tom Izzo.

“He’s given us just what I thought he’d give us. He has incredible leadership. He’s brought some toughness. When Draymond Green leaves here and says, if there’s ever a freshman that should be a captain, it’s him. That’s about as good a compliment as you can get,” Izzo said.

“I think it was just a compliment to say this kid, he gets along with everybody. I mean, when you see him, he’s probably going to introduce himself, look you in the eye. That’s almost illegal now. It’s hard to look someone in the eye while you’re tweeting, that’s hard to do. But he’s going to do that.”

Izzo said he expects these qualities to carry over on the court. “What we have looked at a little bit is him playing the point, [Travis] Trice at the two, and Valentine at the three at times because he brings the ability to bring the ball, give people shots. He’s very good defensively even though small in stature,” he said.

Nairn said his adjustment to the lifestyle of an NCAA student athlete has been an eye opener thus far.

“I’m just really managing my time. I get the school stuff out of the way and make sure I get everything done with that, but I think as long as you stay focused on the goal, it’s not going to be hard to balance it out. It feels really great. It’s a blessing to be here. In my senior year, it was kind of a struggle, but when I came on campus I knew that this was where I needed to be,” he said.

“Some of the guys do stuff in practice that shocks me still. I know that in high school I was more of a dominant player and here [at MSU] everybody is so much bigger, faster, and stronger. It helps you to appreciate the game more and want to get better each and every day. I learned a lot from Travis [Trice]. Things like knowing where to be, positioning on the court, and knowing how to lead the team in the right way because this is his fourth year here. He’s been helping me out on the sidelines. Helping me with positioning defensively and offensively. I think he’s been great for me.”

Nairn will look to fill the void left by the departure of senior point guard Keith Appling.

Nairn shot up the recruiting charts with an impressive summer circuit on the hardwood. He saw his stock rise to the 61st ranked basketball player in America for the class of 2014 by Rivals.com and 72nd by ESPN.com.

Known for his speed, passing ability, athleticism and knack for getting to the rim, his jumpshot has been one of the areas in which critics noted he needs to improve.

“I think I’ve been shooting pretty well. The days I don’t shoot well, the guys and the coaches encourage me to keep my head up because I’m putting in so much work in the gym on my shot,” he said. “I just want to be on the floor and play as hard as I can every single day and every second I’m on the court. I think it just comes from me not having much growing up. I know the next second is not promised, so I just go out there and give my all every time I’m on the court.”

The Associated Press poll this year has yet to be released, but several other media top 25 predictions have the Spartans around where 2013-14 national champion UConn Huskies began last season.

ESPN this week rated the Spartans 18, and CBS Sports put them at 22.

“I think that as long as we continue to have the same goal to be the best we can be everyday then everything will take care of itself,” Nairn said. “Guys have been working hard. The seniors have been helping the freshmen so much and we appreciate them for that. Like I said before, if we keep the same goal, everything will be all right.”

He finished his high school career with the Sunrise Christian Academy Buffaloes in Bel Aire, Kansas.