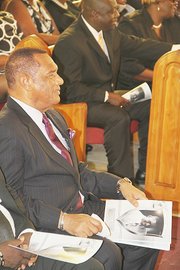 PRIME Minister Perry Christie highlighted Latore Mackey’s commitment to fighting crime at the funeral of his former press secretary on Saturday, adding that the government could honour the 37-year-old’s memory by establishing programmes to curb crime in the country.

“The last time I was in this church, it was for an equally tragic occasion,” Mr Christie told the congregation at the Voice of Deliverance Ministries.

“I was here with a constituent’s mother who was burying her son and whose son had written her a letter indicating his concern that because the life he led exposed him to so many different challenges that he was not sure how long he would live.

“The letter was printed in the funeral programme. Police were investigating a robbery. They found him in my constituency, mistakenly thought what he had in his hand was a gun and shot him and killed him. For this occasion we are once again here for someone who was shot and killed … the reason why I spoke about the young man who died is because Latore was committed to action to rid this country of crime.

“Latore fought an election on the basis that we would do all in our power to get rid of this menace. To my colleagues, as we reflect on his life and the meaning of it, of his commitment to the course of which I spoke, we owe it to him, as we do to all victims in this country, to re-dedicate ourselves and re-double our efforts towards ensuring that we have in place in this country comprehensive programmes that could lead these young men who kill and young men who are killed, all victims, to find another way.”

He added: “Latore wanted to find a vehicle to serve his country. He saw the PLP as that vehicle. He was a core member of the team, working day and night. I only hope that in some way, a sufficient number of us expressed our gratitude to him.

“There are people in our country who lift us up as political leaders. They make it possible for us to stand on a platform as Prime Minister, ministers and members of the cabinet and that’s why so many of us are here today. We have to acknowledge the important role they play to make us stand here.”

Several hundred people gathered at Mackey’s funeral, two weeks after his death sparked concerns about crime in the country.

Filled with scripture and song, the service weaved reminisces about the life of the former Deputy Director of Bahamas Information Services (BIS) with lamentations about the menace that took his life as he left his West Bay Street club in the early hours of August 25.

In the packed church where people who knew Mackey sat next to some who didn’t, government officials, media personnel and Mackey’s co-workers, former classmates and friends remembered the businessman for his “impeccable” fashion sense, laughter, work ethic and patriotism.

Mackey, who was the owner of the Blue Reef Sports Bar and Lounge on West Bay Street, was shot in the neck around 4:30am off Market Street.

Since his death, Kelvin Deveaux, 18, of Market Street and Dereck Neily, 22, of Young Close, have been charged with his murder. Police believe he was killed as part of a robbery attempt.

Why would he mention the cops shooting someone like that?

What is wrong with Perry nowadays man? He's really gone over the pathetic edge really friggin hard. The dude appears this term to be much more of moron than his last time.

Perry you need to just go away now. You know and everyone in the country knows you aint gonna do shit about crime. You won't hurt your base.....

If Perry spoke i'm sure there were more deaths too at the funeral as he usually bores everyone to death with his long winded, meandering, pointless speeches...Guess now he'll start taking crime seriously.....doubt it....

If they didn't take is seriously when the DPM was robbed at gun point, I doubt it will happen for some lay person like Mr. Latore.

Comrade JackNnimbleForget you nibbling away on some lay person being robbed at gun point. If they were able to get inside the Home of the DPM, judge Minnis fending off an home invasion with the BB Gun, the PM assigned to the "policeman's responsible for protecting Her Majesty's official opposition leader? You know the policeman's but no government assigned car to chauffeur Minnis around we Nassau Town? Comrades much too damn funny for even I to make this stuff up.

It appears to me that Prime Minister Christie fell down when he was little and "buck" his head. The cognitive repercussion is just now manifesting itself!