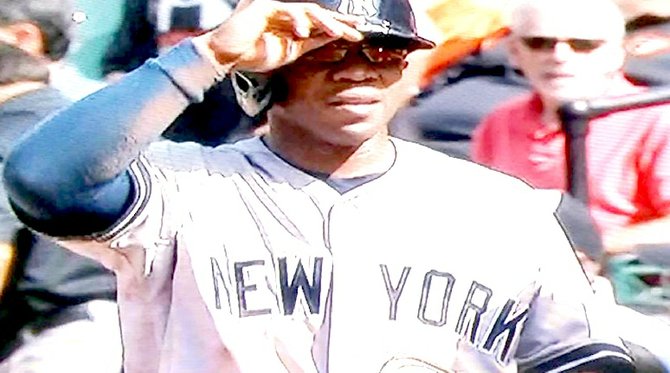 THE history-making feats continue for Antoan Richardson during his stint with the New York Yankees in Major League Baseball.

The veteran outfielder has hit for an average of .444, 4-9 with one RBI and three stolen bases in seven games thus far.

In his fourth appearance after he was originally called up from triple-A baseball, Richardson made his first major League start on September 12 in a makeup game against the Baltimore Orioles.

Despite the Yankees 2-1 loss, Richardson had a strong showing at the plate and the best day of any member of the Yankees line-up when he went 2-3. He also added a stolen base in the first game of a double header.

In the second game that afternoon, Richardson pinch ran and was also 1-1 at the plate in a 5-0 loss for the Yankees.

The following day, Richardson and the Yankees turned it around in game three of the series with a 3-2 win. He knocked in his first career RBI and added another stolen base in the game.

Brian McCann opened the scoring with a solo home run and Richardson would eventually drive home Mark Teixeira with an RBI single.

Richardson was also a part of a double steal that proved to be the deciding run.

Chris Young stole home plate after the Orioles threw down to second, too late to beat the streaking Richardson.

The Yankees opened up a seven-game series on the road last night against the Tampa Bay Rays.

Richardson officially made his Yankee debut September 3 as a pinch runner in the seventh inning of his team’s 5-4 come from behind win over the Boston Red Sox.

It was his first big league appearance in three years and he became New York’s 56th player this season, tying the team record set last year.

On September 1, Richardson was called up for the second time in his pro career. He was added to the New York Yankees’ 40-man roster when the team announced its September call-ups. He spent 93 games with Triple-A club, the Scranton/Wilkes-Barre RailRiders in Moosic, Pennsylvania. He hit .271 with 70 hits, including three home runs and 22 RBI.

He also produced an on-base percentage of .380 with 26 stolen bases and 41 runs scored.

“It still feels surreal, but it is definitely gratifying getting another opportunity at the majors,” he said. “I am humbled, not only by this, but the opportunity to compete everyday on the journey to the major leagues. I’m sure a lot of people back home are excited to hear the news every game and I’ll do my best to go out there and make my family and country proud.”