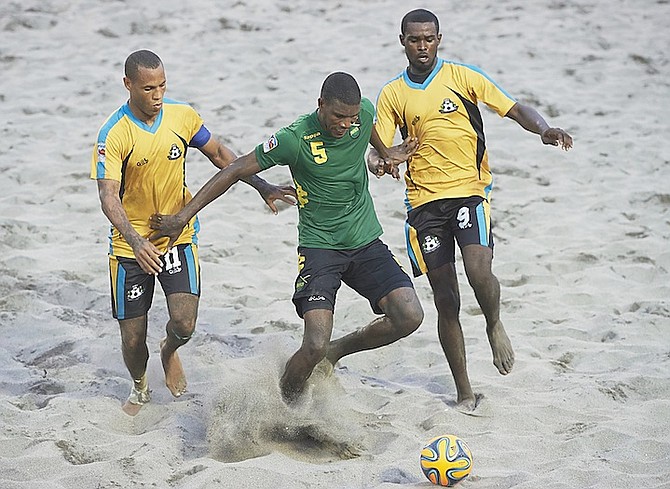 IT WAS far from the finish they wanted, but the Bahamas senior men’s national beach soccer side finished competition strong and on a winning note against the best in the region.

In their final match of the CONCACAF Beach Soccer Championships, the “Rake and Scrape Boys” defeated Jamaica 9-7 in overtime to finish the tournament in seventh place with a 3-3 win loss record overall.

Jamaica got on the board first and took the early 1-0 lead. However, the lead lasted only a minute due to a quick answer from Williams. Jamaica moved ahead once again, but St Fleur converted a penalty kick to tie the score at two following the first period.

After they exchanged goals again to tie the game, Williams’ second goal regained the lead for the Bahamas.

Tied at five at the end of the second, the Bahamas went up by two goals for the first time early in the third (6-4) courtesy of Hanna.

A high-scoring third would see the Jamaicans surge to take a 7-6 lead, but Christie would score the equaliser in a thrilling finish at regulation to tie the game at seven. Christie would add to his late game heroics with another goal in overtime and Williams would score the third of his hat trick for the final score.

The Bahamas reached as far as the quarter-finals, where they suffered a 6-0 loss to host country El Salvador, on Thursday night.

In the fifth place playoff, they suffered a 4-1 loss to Trinidad and Tobago, relegating them to the seventh place match.

Mexico won the tournament to claim the CONCACAF title and, as runners-up, Costa Rica claimed the second of two automatic bids to the FIFA Beach Soccer World Cup Portugal 2015 in July.

After they opened the tournament with consecutive wins, the Bahamas lost three games in a row before they reclaimed a spot in the winners’ circle.

The Bahamas finished second in the group stage at 2-1.

In the opening match, the Bahamas topped Barbados 10-4. The Bahamas got out to a quick 2-0 lead on goals from St Fleur and Hanna before Bardados would answer and score three unanswered goals to take the lead.

Gary Joseph regained the lead for the Bahamas, before Barbados would tie again and the Bahamas moved ahead for good on a goal from Gavin Christie.

With a 5-4 lead, the Bahamas pushed the tempo, found their stride on the offensive end and closed the game on a 5-0 run. They also clamped down defensively and held Barbados scoreless in the remaining frame.

The Bahamas clinched a berth in the quarter-finals after a 4-3 win over Antigua and Barbuda in their second match.

St Fleur scored two goals, Hanna would add another and Antigua and Barbuda’s Gershun Philip was charged with an own goal which gave the Bahamas the edge at match end.

Antigua and Barbuda’s Odel Murray scored a hat trick for his side, but could not get enough goal support to come away with the win. He led his team to an early 2-0 lead before St Fleur and Hanna scored the equalisers.

They suffered their first loss of the tournament, 6-2 to the United States. The Bahamas trailed 3-0 headed into the third period before St Fleur scored the first of his two goals in the match. The US finished the group stage undefeated.