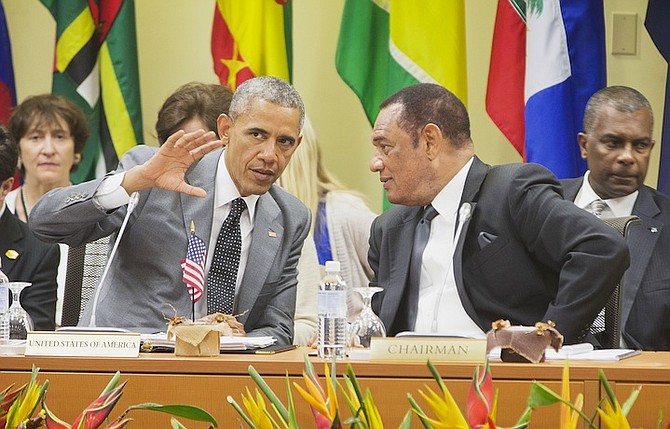 US President Barack Obama talks with Prime Minister Perry Christie at the summit with Caribbean Community (CARICOM) leaders yesterday in Kingston, Jamaica. The president said that will he soon decide whether to remove Cuba from the US list of state sponsors of terrorism now that the State Department has finished a review on the question as part of the move to reopen diplomatic relations with the island nation.Photo: Pablo Martinez Monsivais/AP

CRIME and security risks “rank high among the principal threats and obstacles” to growth in the region, Prime Minister Perry Christie told the CARICOM-US Summit in Kingston, Jamaica yesterday, stressing that Caribbean countries value the support of the United States in this area.

Mr Christie, the current chair of CARICOM, addressed US President Barack Obama who was present for the meeting.

Mr Christie said he was speaking for the region’s youth, who need a sense of hope, job prospects and good educational opportunities.

“We cannot surrender them to the negative forces of crime and war in far flung climes,” Mr Christie said. “If this meeting produces anything today, it must be to ensure the future of our young people. If we fail in that mission, we do so at our peril.

“At the centre then of this mission for us is that of human development. This must be done in a safe and secure environment, with respect for the sovereignty and territorial integrity of all.

“In this connection, we welcome therefore, the recent development toward the settlement of the Nuclear Framework Agreement with Iran in which the United States played a major role under your leadership.”

“In addition, in our own region the dialogue between Cuba and the United States toward normalisation of the relationship is a pleasing and welcomed development.”

He added that regional leaders were pleased to hear US Vice President Biden announce at a recent meeting in Washington last January “that some action was being taken by your administration in respect of facilitating our access to development financing in areas related to climate change, energy and disaster management.”

On the issue of crime and security, Mr Christie said: “In my own country, as the closest offshore country to the United States, the benefits of security cooperation are obvious to our people; the fight against transnational crime, including illegal migration is urgent, the importation of guns from America wreaks havoc and needs to be stopped. That is but one country’s example of the sense of urgency we feel on crime and security across the region. More must be done in a practical way to stop the crime. Let us work together to build a zone of peace; to stop crime; to end the violence; promote our young and ensure our common futures.”

He added: “Mr President, we met before in Port of Spain and in Cartagena. We agreed in those fora on specific actions. For many, the results in concrete terms did not match the loftiness of the declarations made there. This time, this meeting should mark a new and positive beginning for the CARICOM-US relationship, with a mechanism for partnership in place for the progress of our region and its people. The outcome of our discussions today will no doubt strengthen the partnership between us. Let us build on these discussions, seeing them as part of a continuing conversation, and leaving here with a concrete set of actions which we mean to accomplish.”

we gotta love this man.

Why does perry look star struck in Obama's presence? Not a bad thing necessarily but it's not exactly leader like.....

Fred probably saying " I should be sitting in that chair,not that moron

The man's a genius...let's re-elect him for another 5 years. By the end of that maybe we will be up to 300 murders a year.

In 2011 under the FNM the murder count was a record 127 - it has not been that high since the PLP took office. It's been close, but at least stick to the facts, under the FNM retards the crime and murder rate Skyrocketed, people committed suicides at an unrepresented rate, and the country was given away to foreign entities. The FNM are nothing but traitors to this country. So that said, if you don't elect the PLP, are you going to elect the DNA, or FNM again? You talk about murders as if you never lived in the Bahamas during the year of our lord 2011, when people were dropping dead like flies every other day. In 2011, were you living in the Bahamas, or did you live in your own little FNM ferry tale land?

They are dropping faster now...we are on target for 160 this year...

generalcrazy i see you have changed your name to FNM_Retards huh ?

is dat da nigga dat is get under erry one elses skin on dis here web site? Cuz I did here he is be da onliess one talking da trute.

Did he have a hard night??-literally

The cat is already out of the bag. Crime has made the name The Bahamas, MUD. I had friends that where supposed to come down this summer that have informed me that they are going elsewhere instead. When asked why they said they could get exactly what the Bahamas has to offer at much better rates, with better service (they have been told), and less crime. Where might you think they are going? CUBA!

Obama is a smart man and has been fully briefed on our government's cozy relationship with the Chinese government, which relationship is of a national security concern to the U.S. given our close geographical proximity. The opening up of Cuba is one way for the U.S. to ensure that all of the recent Chinese investment in the Bahamas is economically crippled.

Sounds about right, the economy in the Bahamas seems to be going in reverse. PC them just think they smart, bunch of posers.

Gonna be a long, busy weekend with this one!

The biggest threat to our economy right now would be another 5 years of this asshole and his band of Kleptocrates!

What a picture two smart intelligent men. they worked hard to get where they are today. they are an inspiration for young men from Bains Town and over the Hill..

The difference is one has ethics, morals, is fair and balanced, while the other one looks out for party faithful, cronies, and is utterly bankrupt as far as ethics and morals go. If Obama called a bank to intervene on behalf of a government employee that was a tax cheat to stop the bank from reposessing said civil servants home he would have been impeached and thrown in jail, our corrupt PM brags about doing so. These two men can not be compared, do not insult Obama by even thinking PC is a tenth the diplomat and statesman he is. You are comparing apples (Obama) to rotten conch (Christie).

Obamma has as much morals as Snoop Dog. So, bad comparison

The biggest threat to our economy right now would be another 5 years of the FNM retards.

Fred is upset that the focus is on" those two men upfront" and not him , because in his mind he is more intelligent than the two of them put together.Like DIRTY HARRY said in the movie," he is a legend in his own mind".

I think Obama was following all the way up to PGC's use of "on those fora", at that Obama must have paused and thought, Who uses the word "fora"? Who is this clown?

Lawyers and undertakers are not complaining about the economy. For them it's a boom.

Is Marathon Mall slowly turning into Town Center Mall? A number of stores have closed since Christmas and some that remain open barely have customers.

they are doubling the parking lot next to the air couriers.

the stuff is so expensive locally that people buy online, so yes, some stores closed.

now clothes are only 20% dutty and the price of clothing has not dropped at the shop.

The martk up is so high that even paying air freight makes the stuff 40% cheaper that in the stores.

several of the closed stores are clothing stores.

i go to the mall to pay bec and btc. then i look at the prices of major retailers, note the prices, and come home to shop at amazon.

Only 20%? 20% then 7.5% on the 20% then 7.5% on the value of the clothing article. duty went down and the taxes went up. they made EVERYTHING more expensive. its sad when its cheaper to pay loads of duty + shipping fees + VAT on services + VAt on the duty + VAT on the items than it is to buy it from a store that takes all of those expenses and doubles the item cost to the customer.

do the math, duty+ vat + shipping is still cheaper than retail at the mall.

also cheaper than flying to miami, because the flight fees wipe out your $300.00 exemption.

who said anything about Amazon? oh wait that guy lol didn't see that part

i heard you only buy at that french store WALMARTE'