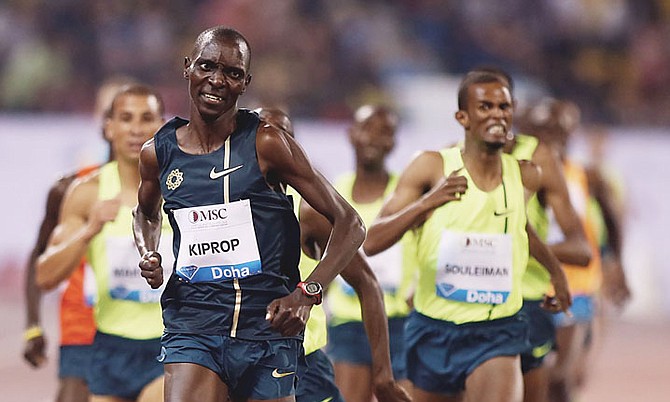 TO follow up their series of record-breaking performances last year, one of the greatest distance running countries in the world will field a star- studded team for the 2015 BTC/IAAF World Relays Bahamas.

Kenya recently hosted its trials for the upcoming event and announced a 30-member team which includes many of last year’s record breakers on the men’s side and a host of newcomers on the women’s side.

With the 4x1,500m relay replaced by the distance medley, it created some shift on the women’s side with no members of last year’s squad making the trip this time around.

In 2014, Team Kenya walked away from the two-day competition with a pair of new world records and wins in three of the four middle distance relays contested over the two-day meet at the Thomas A Robinson National Stadium.

The seldom seen 4x800m and 4x1,500m events took centre stage as the backdrop of junkanoo music inspired the athletes in their race against the clock.

For each world record, the Kenyans took home an additional $50,000 world record bonus on top of their $50,000 first-place prize money.

In the men’s 1500m, the team of Kiprop, Collins Cheboi, Silas Kiplagat, James Magut and held off chief rival the United States and Ethiopia to set a new world mark in 14.22.22s.

This year in the medley, Kiprop will be joined by Ronald Kwemoi, Ferguson Rotich and Abednego Chesebe.

The second world record for Kenya came from the women’s 4x1,500m team as they highlighted day one with their record-setting performance in a time of 16.33.58s.

In 2015, Kipketer will return to defend the title and chase the record alongside Nicholas Kiplagat, Jeremiah Mutai, Kiptum, and Bernard Kipyegon.

It will also be a new slate for the women’s 4x800m team who finished second to the US last year. They will look to improve their standing with Annet Mwanzi, Sheila Chesang, Eglay Nalianya, Sylvia Cherop and Purity Cherotich.

Kenya, who will again be led by head coach Sammy Rono, will also contest the men’s 4x200m.

This year’s BTC/IAAF World Relays is scheduled for May 2-3. There are a few changes with the starting times on both days moved from 5pm to 7pm to accommodate the fans who were affected by the scorching heat in the eastern section of the stands.

The top eight finishers this year will qualify for the Olympic Games in Rio de Janeiro, Brazil, August 5-21.