Crowds Come Out For Carnival 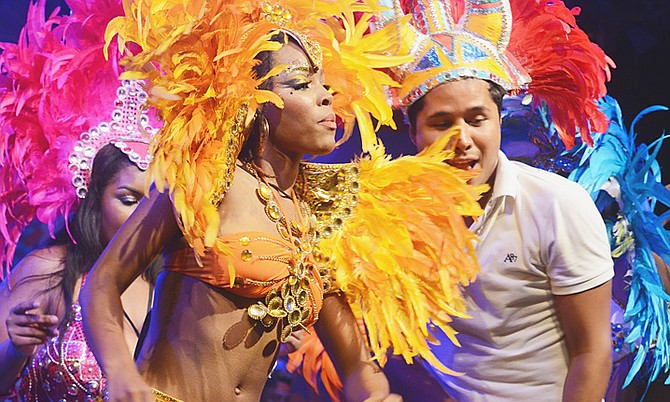 THOUSANDS of revellers flocked to Taino Beach for two days of fun and live cultural performances, including the Music Masters semi-finals and All Star-Bahamian concert, as the first Bahamas Junkanoo Carnival got off to a successful start in Grand Bahama.

Grammy nominated T-Connection closed Saturday evening with a spectacular headline performance. Taking the stage after midnight, the disco group grooved the crowd with their many hit songs, including “Saturday Night” and “Do What You Wanna Do”.

On Friday’s opening night, there was a special song tribute and a moment of silence for Grammy-nominated Bahamian R&B singer Johnny Kemp, who died on Thursday at the age of 55. Kemp – who grew up in Grand Bahama and moved to New York in the late 1970s – rose to fame with the 1988 hit single “Just Got Paid”.

Prime Minister Perry Christie, who opened the event, was pleased with the turnout. “Grand Bahama, you demonstrated yet again you are prepared to come out … to show that Grand Bahama is ready to support Junkanoo Carnival.”

Taino Beach Cultural Village was teeming with police, security personnel and lifeguards to ensure the safety of visitors and locals. The street and seawall was thronged for the carnival-styled street dancing and junkanoo rush out.

Obie Wilchcombe, the Tourism Minister, said Junkanoo Carnival is a celebration of Bahamian people and culture. He mentioned that famous Bahamians recording artists like Johnny Kemp and Mr Roberts have put the Bahamas on the international music stage.

“This is a time of celebration and we want to pay tribute to Johnny Kemp who grew up in Grand Bahama with us; we are very proud of him.”

Ministry of Youth, Sports and Culture Daniel Johnson said the event in Grand Bahama is a showcase of Bahamian culture at its best. “It is true music, dance, and us as a people – that is what it is all about,” he said.

On the first night of the Music Masters semi-finals, Grand Bahama’s Terrell Tynes-Wilson rocked the audience with her “Mash Up the Carnival” and “Roll Mama”. Ian McQuay’s “Going Home,” Sonovia Pierre’s “Junkanoo is My Carnival” and Angelique Sabrina’s “Make Ya Feel Good” were also crowd favourites.

A former official of Trinidad’s Carnival Commission was impressed with the organisers of the event. Keston Nancoo, former chairman of the National Carnival Commission in Trinidad, said there is room for improvement, but that it is a great start to a establishing a carnival festival.

“The talent is here … and as you continue to build on what you have, I am of the view that you have a very solid foundation here,” he said. “What you need to do is keep building on your junkanoo and allow it to evolve. I think it is a great beginning and I am very proud of your Prime Minister and his commitment and conviction to ensure that this event takes place.”

Among the crowd Laurie Rolle said she enjoyed herself. “I came out with friends on Friday and Saturday and we had a ball: the food, music, and entertainment was very good.”

Another woman, Pearl, said Taino Beach was the perfect venue. “The performances were very good and they catered to families with children. I am looking forward to Carnival in New Providence, she said.

The 10 finalists making it to the Music Masters Finals in New Providence for Bahamas Junkanoo Carnival on May 7-9 are Sonovia Pierre (Junkanoo Carnival Party), Sammi Star (Everybody Jump in Da Line), Georgina Ward-Rigby (In the Carnival), Colyn McDonald (Jump and Carry On and Carnival is Here), Tyrone “Plati” Dread (Junkanoo Rock), Ian McQuay (Going Home), Erika Symonette (My Islands in the Sun), Chris “Sketch” Carey (Rushing Down the Road) and Bodine Johnson (All Day, All Night).

Many (Bahamian) people still don't understand the goal and marketing target of Junksnoo Carnival. While the crowds in Freeport on the weekend were definitely impressive and a success for the launching of J carnival it is not the target crowd. For Carnival to be a true success you will have to see two or three or four of every person in the crowd being foreign tourists. The airlines coming from abroad will have to be booked solid to the point of putting on additional flights and the same with hotels and living accommodations so that the Ministry of Tourism will have to put out ads for persons with suitable housing and willing to rent to contact them. The crowds will number in the tens of thousands rather than just thousands. Food and other vendors will sell double or even triple what they sold on this weekend and there will be many more vendors. That is the goal of carnival and that is why it will take a number of years to get there and that is why proper (international) marketing and (maybe) a well known headliner (draw) is important. While a carnival attended by mostly Bahamians does create economic activity and generate some wealth, it brings no new money to the country. That is the intention of J Carnival: to draw the international crowd.

Exactly. We are looking for money to be injected into the economy. What we had over the weekend was money changing hands. the goal was foreign injection.

Freeporters danced to da beat of de Trinidadian Carn-naval!!! Only thing missing was, da sweet music and beat of our own Junkanoo.

Absolutely, nothing short of jouranaisc "junk" reporting of the opposite of what actually took place in Freeport over the weekend.
Comrades’ statements of a Carnival 2015 economic boom over the weekend in Freeport, is but a political statement and statement from the heart of what they wish Carnival 2015 could have been. I have no hesitation in stating that had only The Tribune conducting a investigation by speaking directly with Freeport businesses, they would be reporting the exact opposite, that it is not a sensible financial reality that Freeport experienced anything close to a Carnival 2015 boom. In fact, not even a close one. The promised performers windfall could not have materialized, if it’s correct that the two top “native performers” Jay Mitchell and T Connection, were only paid a mere pittance of $750 each. The Carnival 2015 people have promised an actual "audit" within the next 7 days, so lets just wait to see how creative they can be? To make this add up, they'd have to count $1 to $10's, and in their "promised audit" disclose it as adding up to $1000. Can they really do that? Don't ask me.

Many more Bahamians than Tourists BUT Carnival was done by the Government to distract Bahamians. The Tourist was never the market. Just like Caesar did 2000 years ago with Gladiator fights in the Coliseum to distract the people so does this government.

It will not bring in foreign money, it will just take from the Bahamians what they don't really have to spend.

Comrade Economist, I'm not like really sure but there must be some sort of approval needed from the Port Authority to build a Coliseum. But who knows, maybe not for the Chinese State Construction Company.

you have to BUY the specified carnival costumes from the one company and there not cheap, only one making money is the manufacturing company. no more making your own costumes.

At best the costumes look crappy and cheap for what they are.