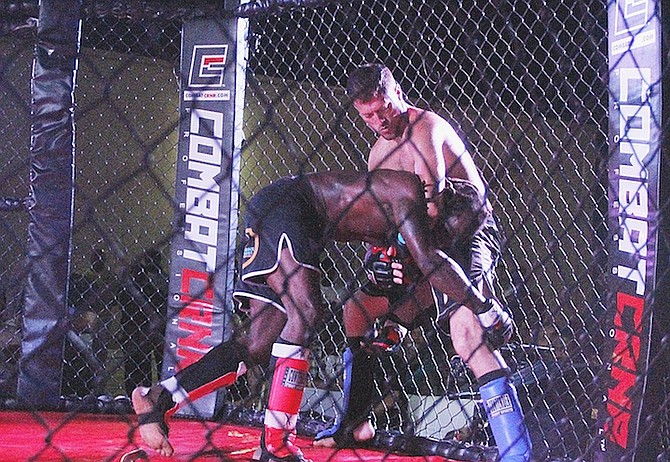 BAHAMIAN fighters were successful in four of the seven bouts on the card in the inaugural Bahamas Open Martial Arts Championships Cage Fight 1 at Mario’s Bowling and Entertainment Palace on Saturday night.

into the first round

In the other half of the co-main event, Johnson ended the night in fitting fashion with the only submission on the card. A rear naked chokehold forced Miller to tap out 1:15 into the first round, sending the Bahamian crowd into a frenzy. Johnson improved to 2-3 while Miller fell to 1-1. He landed his first strike just seconds after the opening bell and never let up as he followed with a takedown and several right hands. When the fight went to the ground, Johnson was able to land several blows and position himself for the RNC.

The heaviest fight of the night at 205 pounds, both fighters lived up to that billing exchanging powerful strikes early on. When the fight went to the ground, Moxam took control before Tucker was able to escape a hold and counter with the knockout blow. He was able to scoop up Moxam, slam him to the mat and follow with a ground and pound to score the knockout. “The fight was close, he’s a very good grappler. He was able to neutralise alot of my attempts to sweep him. He was a strong guy, so I had to be in there battling against him. I was able to sweep him finally at the end,” Tucker said. “From there he tried to put me in a triangle so I saw an opportunity to lift him, slam him on the ground. He was out from the slam apparently but I still followed through with my strikes to secure the knockout.”

In the co-main event, Livingston survived an early barrage of strikes from Simmons to eventually outlast the home favourite. The first round belonged to Simmons. Ignited by the crowd he opened with several strikes and knees to take control early. He scored two takedowns in the round but could not capitalise before the bell as Livingston survived the first round. In the second, he caught Simmons with a left hook that changed the momentum of the fight. He followed with several uncontested blows before the referee stoppage came at the 2:52 mark in the second round.

The night got started with Neymour making a successful home debut in the 155-pound weight class. After Garvy landed several body blows, Neymour scored two takedowns to take control of the first round. He said it was his ability to counter and take advantage of Garvy’s weaknesses that proved to be the difference in the bout. “I noticed his striking wasn’t that on point, so I took advantage of that. I noticed that his wrestling wasn’t that good so I took it to the ground as well. I noticed that he tried the jiu jitsu moves and it wasn’t working as he expected, so I did a little bit of jiu jitsu as well,” Neymour said. “Basically any weakness in his game I tried to expose and create an opening.”

Neymour escaped a hold near the edge of the cage and ended the first round with a flurry of strikes once both fighters got back to their feet. He countered a blow with a slam that led to an exchange on the ground and the referee stopping the fight as Neymour began to ground and pound. “It was my first time fighting in the Bahamas, I only fought in the US and it’s an honour to fight in my country for the first time. I needed it for my debut so they can actually see where I came from,” Neymour said. “I’m looking for more fights so I’m heading back to Florida to pursue those. I have an upcoming fight in July, so I’m looking forward to coming back home with a belt or a gold medal.”

Making his fight debut, Cameron Lewis came out inspired in the first round, but could not maintain that pace throughout the fight. Lacroix scored the first win for an international fighter on the night in the 170-pound weight class matchup. “It was a good one,” Lacroix said as he moved to 2-0, “He came out hard as I expected with him fighting in front of his home country but I was ready for anything.”

Lewis connected with a strike, which saw Lacroix fall to the mat, but he failed to take advantage of the opportunity. “He came out strong in the first round, I survived that and I know I had him tired with the knees. I just kept on going and going until the referee stopped me. I wasn’t going to stop until the refereee pulled me off of him,” Lacroix said. “He caught me with a punch but I slipped on the sweat, so when I got the chance to get back up, I wasn’t rocked or anything, so I was ready to go again.”

The visitor dominated the second round before the stoppage midway through.

into the first round

Brown was one of the crowd favourites on the night and remained undefeated as he continues to show promise early on in his career. He said it was the inspiration from the home crowd that was the catalyst for his focus midway through the second round. “I heard someone in the crowd shouting ‘eat your food, eat your food’ and I remember from the last time I fought they were telling me not to ‘play with my food, go eat that.’ So it helped me to regain my composure,” Brown said.

“It was a different feel. I’m used to fighting with the crowd never behind me or having my back but it feels good to be fighting in front of family and friends.”

Both fighters were cautious early, feeling each other out before Brown landed several kicks to the lower body. When the fight went to the ground, Brown struggled faced against the weight of a heavier opponent, but was able to counter and gain control of the match.

“The guy did a double leg takedown and had me stuck there. I don’t normally fight at this weight. I’m usually at 125, but I ended up fighting a whole 20 pounds over my weight, but when I saw my opening it was beast mode from then I took advantage,” Brown said.

“I plan on fighting at 135 or 145. I really practiced and wanting to work on my kick boxing so I had no intentions of going on the ground with him but it worked out in my favour.”

One of the most experienced fighters in the field, Colquhon set a frenetic pace early to move ahead on the scorecard and maintained that advantage in the only fight of the night to go the distance. He came out strong early on with several knees and got Isaacs on the move early before the fight shifted to the ground. On the ground, he wore down Isaacs with several body blows, including illegal elbows.

The second round mirrored much of the first with the fight going to the ground early and Colquhon using his speed to keep control. Isaacs opened the third with his most aggressive exchange of the match, but it was not enough. Colquhon moved to 4-0 while Isaacs fell to 0-2.