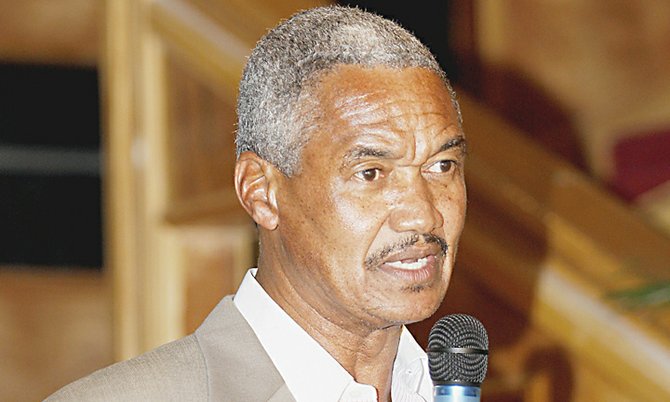 Speaking with The Tribune, Mr Miller also warned customers to expect disruptions in supply for the next 10 days, as the corporation struggles with “serious issues.” This came a day after he initially warned of possible load shedding until next Monday.

Mr Miller urged the government to complete the request for proposal (RFP) process to select a private company to manage BEC so officials there can start to fix the host of problems at the corporation.

“It’s like they do not understand the urgency to get BEC fixed,” he said. “Why should we be renting generators? Why do we have to go through this over and over?

“We are in serious trouble. We need a new plant, without that I cannot guarantee anything. The power can be on today and go off tonight, nothing is certain. We are going to have to load shed until we can do better.”

Mr Miller said BEC’s first rental generator is expected to arrive in the capital on Thursday, however, he said, it will “do little” as it only supplies five megawatts of power and the corporation currently has a power generation shortfall of about 30 megawatts.

“This is going to be like this for at least two weeks,” Mr Miller said.

“We are currently short by 30 megawatts of power. Now we do have some generators in Freeport and we are trying to get them here but that is still only five megawatts of power. We will get it between now and Friday and put it in the system but that will not solve the problem.

“This is a serious, serious problem we have three engines out at Clifton and two at Blue Hills. The big one at Blue Hills that supplies 21 megawatts of power has been out for about six weeks and they just determined what was wrong with that. But now we have to order a part and that won’t get here for 30 to 60 days. The demand is about 205 (megawatts) and we only have about 170 (megawatts), there is really nothing much that can be done right now.”

Last week, Mr Miller said the first set of rental generators secured for BEC would arrive over the next few days, reducing the chance of blackouts during the summer months. The generators will be rented for about six months at a cost of $8m.

In August 2013, the government said it planned to split BEC into separate generation and transmission and distribution arms. However, the government later said it had abandoned that idea and is instead moving forward with a business model that mirrors the Nassau Airport Development Company’s (NAD) arrangement for Lynden Pindling International Airport’s (LPIA) management.

However, Prime Minister Perry Christie has not yet made an official announcement on the matter.

We need a sign saying "No friends allowed in the work places between 9 to 5." If we can stop this, only then we will get some work done in this town.

I see it coming: IAAF relays in the dark.

Didn't you hear? WE will be in the dark not them. Mr. Miller said to expect parts of the island to be in the dark this weekend so the foreign press can have power in the media area. NEWSFLASH BEC CHAIRMAN: this is unacceptable and for you to even consider this a reasonable solution, shows how ridiculous this entire government is. Trust me, the foreign press will notice the darkness all around and THAT story will make headlines everywhere.

So there is a chance that we will even miss watching team Bahamas on television. Sad.

The best thing that they can do is roll one of those hired generators up to the TAR stadium and hook that sucker up direct ............. dont take no chances on that transmission system

This is a total disgrace. Leslie Miller should step down or be fired. Anyone with any self respect would not accept a salary for a job they cannot do. What a piece of garbage.

As for the power problems, this is quite obviously deliberate, every other Island Nation in the region can and does provide reliable power; so why not here?

Bahamian pride aside, our country is a joke in so many ways!

Perry and Brave need the self-proclaimed Potcake to take the blows from the people because Potcake doesnt care about legacy ....... he getting his fat ExChair cheque and Perry dem can buy time

This is a national disgrace These guys have no shame. Why is perry brave and the rest of the clowns are still in office ?

This sorry a$$ problem with BEC is not new and it is a strong indictment on everyone Bahamian who has allowed the problem to drag on for so long. Many can remember as children growing up those long hot summers when the power was off due to some problems with BEC power or there was some industrial action going on with BEC Union. It was not unusual to look up East a Street and see the orange glow of power lines on fire or to look down Market Street and see sparks coming from light poles and watch wires burn and fall to the ground. Transformers exploded in the middle of the night sending communities into panic and forcing many to avoid the streets and use back yard track roads instead. A lot of these problems were fixed in the 1970's when BEC not only installed new generation plants but also new transmission lines. But when you have a strong union that ensures its membership is overpaid and overcompensated for its labour and when a company tries to operate when about 10% of its product (electricity) is being stolen and about another 20% of its electricity is not being paid for then serious financial will develop. Add to this you have fuel inefficient equipment that send fuel bills through the roof. Welcome to BEC 2015 : a cash strapped crisis management company still with an overbearing Union and antiquated equipment that is failing miserably and adding to the misery level of all New Providence residents. The problem is not going away by itself and the longer it takes to get fixed the bigger the problem will grow. Total failure is a possibility. BEC needs a cash injection to purchase new equipment. Fuel efficient. It must harness this runaway Union and it must protect its revenue. There has to be an ongoing plan for capital growth and plant replenishment, otherwise it will find itself in this same position in 5 years. But the first step is that BEC. Must stabilize its power supply and control and reduce its labor and fuel costs. A company cannot be producing at its near maximum capacity and not realizing a profit. You don't need a foreign consultant to tell you that. Stop juicing Bahamians.

Every Bahamian should be offended by the slipper dragging approach this government is taking to the power woes in this country. While Leslie Miller seems to want to make something happen. The rest of the government, including cabinet seems to be giving this problem a low priority. How many millions were lost by local companies last summer due to power outages. And how much do they stand to lose this year? How insulted should you be when your tax collecting government can bring in trailer loads of generators for their carnival event ? How offensive is it when the chairman of BEC bells you to be prepared to sweat and grope in the dark during the relays because we can't afford no blackout at that event

would like to know how much money was spent for the plethora of generators sitting at Arawak Cay for carnival. did we buy them? if so where will they end up afterwards? did the bahamian people just invest in these so that a few MP's and their families can have new gennies? and if we rented them - well, what a sad reflection on our own government that they squander the people's money on an event that Bahamians didn't want, and then cannot even guarantee to supply power (although they run the electric company) to their own event, so more money squandered to buy/rent add'l power. There is something truly wrong with that picture. And why aren't the journalists doing their own investigation to find out what the cost is of these gennies, and the status (rent/buy) and their final destination (if purchased). A picture of all of those generators would make for a powerful front page!!

The worst part is that when "the fix" finally is decided upon and implemented, it won't be a fix. Everyone with a brain knows that the only long term solution that will provide reliable power at reasonable cost is to privatize the power generation and distribution system. That, however would mean that all the political fat cat jobs that have been doled out over the years would be ended and the political class would no longer have the BEC slush fund to pad pockets for elections.

Further everyone knows that the generation fuel of choice, natural gas, cannot be controlled by certain favored political cronies. The dithering is all about how do we appear to do something, without screwing up our very lucrative rice bowls. Sadly there is no way through that maze so we will sit in blackouts that will go on all summer and likely beyond.

It is that attitude that has us sitting in the dark as we speak. The power rests with the people. We only get what we demand. If we stop seeing the BEC problem as an FNM issue or a PLP issue but s national issue and stand united and demand it be fixed then it will happen. Same thing for crime, murder especially.

Christie has told Miller that no matter what it takes our National Stadium and hotels must have all the electricity they require during the IAAF Relays to avoid embarrassment for Christie and his government on the international stage. Miller in turn told Christie that this will mean his black crabs all over New Providence will have to be over-baked during the IAAF Relays. Christie's response: "Don't worry bout over-cooking dem black crabs - they gonna vote for me no matter what when da time come and they ain't fool enough to go crawlin' all over my National Stadium to cause a ruckus when they get too much heat to their heads during the Relays!"