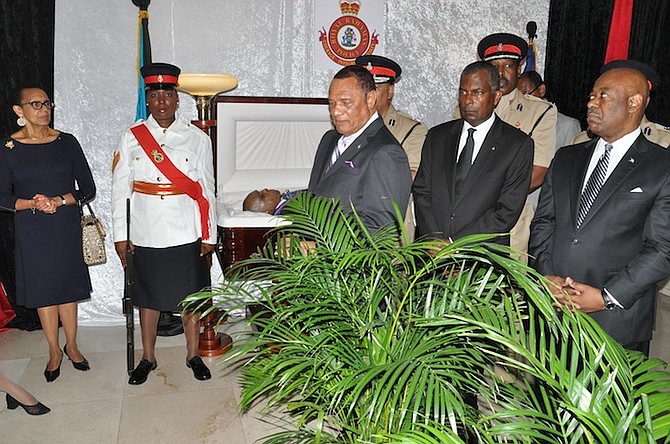 A lLINE of mourners led by senior government officials turned out to pay respects to prominent businessman Sir Albert J Miller, a former Deputy Police Commissioner, as he lay in repose at the Police Headquarters Building in Freeport, Grand Bahama, on Friday.

A full military funeral will be held for Sir Albert at 11am on Saturday at the Pro-Cathedral of Christ the King Church, Freeport.

As Mr Christie made his way into the building around 10.45am, he was led by Police Commissioner Ellison Greenslade to the casket where two armed officers stood guard. After paying his respects, Mr Christie told the family that Sir Albert’s “life typified greatness” and that his story must be told so that it serves as inspiration to young generations of Bahamians.

“I am so happy that the Police Force, the Commissioner of Police and his colleagues, with your support and consent, have allowed him to be seen in this setting because this was his first love, his chosen profession,” the Prime Minister said.

“We truly want to you to know that we expect the family to understand the full meaning of having this story of his life captured,” he said. “Russell (Sir Albert’s son), you were there when I talked to him about this. His life is too meaningful to allow him to go into the oblivion of history; the achievement is too powerful not to have it be used as a source of inspiration for young generations yet unborn who will know that a man came from Long Island, and became the best police officer, became the best corporate man, the best daddy, and the best husband,” he said.

Sir Albert died on August 18, aged 89. He entered the policing profession at a young age and quickly rose up the ranks to deputy police commissioner. After leaving the Royal Bahamas Police Force, Mr Miller came to Grand Bahama, where he held top executive positions as president and co-chairman of the Grand Bahama Port Authority for many years and became a successful businessman.

Standing near Sir Albert’s casket, Prime Minister Christie said: “Here lies one of the great men of our times; that history, invariable by its very nature, has to catch up with the full meaning of a life that is deemed great. And therefore in the fullness of time, if the story is properly told of Albert Miller, he will be represented for his children and their children and their children’s children as one whose life typified greatness.”

He noted that Sir Albert was not born with wealth, but was able to capitalise on the opportunity given him in every aspect of his life; and by facing his challenges and overcoming them.

“He was a king, but he was also a common man. To you his children and your children and other relatives here, his life partner, I had the opportunity to meet and talk with him and satisfy myself that he had run his full course and he was absolutely satisfied with the race he had run,” said Mr Christie, reassuring the family.

“He knew completely that he had done all that he was expected reasonably and even more, to do and felt good about it. And he was able to see this very occasion here that there would be his passing and our coming together to celebrate his life.

“We came down, my colleagues and myself, to demonstrate on behalf of the country our esteem; the privilege we had in knowing him, and personally in my generation knowing the challenges he had in his life. And in this setting, challenges as a senior police officer, but accepting and moving on and upwards; coming into Grand Bahama, a Long Island boy, recognising that the opportunity he had was one in which he had to show himself to be an exemplar.

“One who was always in the spotlight and one whose example will always be noted. And he lived up to every expectation. A Long Island boy who became a familiar as one could be in the corporate world. And then he had to do something else; he had to put a human face, a local face, a face of colour to the GBPA, a panache, a razzle dazzle and pizzazz - he had it all. He has now had the wind pass over and is gone.”

Sir Albert is survived by his wife Lady Laurie Miller, their children, Russell and Tony Miller and Debbie Archer.

Interesting to note who from the PLP was not there - the real power brokers of the party.

Albert Miller was a typical Long Islander ........... he left the island, made a fortune and never looked back ......... no fond memories of him back on the home front