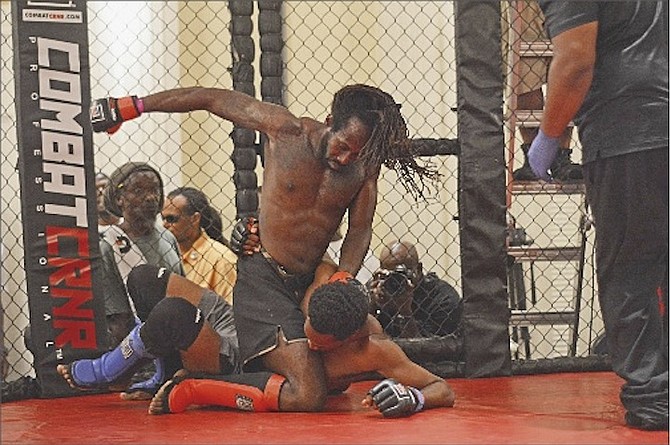 In April, BOMAC Cage Fights 1 featured seven bouts at Mario’s Bowling and Entertainment Palace. Fighters from Trinidad and Tobago, Jamaica, Cayman Islands and United States competed alongside top local talent on the card. The second edition once again featured fighters from each of the four countries.

In the main event, Turnquest, the Bahamian descendant, fought a tactical fight and won the most closely contested bout of the night. “I have family in the Bahamas, that’s where a lot of my family is from so this meant a lot for me to be here tonight,” Turnquest said as he addressed the crowd following the fight. “You guys didn’t have to come out and show this support but I’m glad you did and glad we were able to put on a show.”

Turnquest went on the offensive early and struck first with a trip to take the fight to the ground. Smith’s best exchanges came with kicks to the chest and Turnquest was able to withstand and counter. Turnquest, 32, improved to 4-0 win-loss record so far with one KO and two submissions. His previous fight was a submission win over Baraq Hunter via triangle choke at Island Fights 30 in September, 2014.

In the first pro fight of the night, the Trinidadian fighter took control early to advance to 3-1. Walkins drew first blood nearly three minutes into the fight with a series of strikes as he had Sizemore pinned against the cage. That became the position of both fighters for much of the first round and throughout the remainder of the fight.

Perry overcame a rough start to the match but rallied late for the second round of the night. Roberts dominated with strikes early on and caught Perry with his guard down several times. Perry was stunned early on, but recovered with a massive left hook which nearly floored Roberts. He followed with a running knee which pinned Roberts against the cage to change the momentum of the fight.

Perry stayed on the offensive and another hook flattened Roberts. He followed with a ground and pound at the 5:17 mark in the first round.

The hometown favourite got the night off to a promising start for Bahamian fighters with the first win of his career. Isaacs landed a strike to the head at the 1:20 mark in the second round and the visitor from the Cayman Islands was unable to answer the bell. Isaacs moved to 1-3 while Exctain is still in search of his first win at 0-3. Exctain was the early aggressor but an Isaacs kick to the head changed the complexion of the match. He followed with a flurry of blows but couldn’t capitalise as both fighters looked fatigued by the end of the first round. In the second round, Isaacs landed a strike to the head which floored the challenger.

Simmons took the fight to the ground early on and countered a hold with one of his own for the first win by submission of the night.

The hometown favourite locked in a rear naked chokehold at the 1:26 mark in the first round to force the American to tap out.

After exchanging strikes early in the fight, Simmons followed with a takedown.

Newton took advantage early on the ground and was able to get him into a chokehold, but Simmons would eventually fight his way out.

After a series of strikes landed the rear naked chokehold for the win.

Simmons avenged his loss at BOMAC 1 and improved his record to 2-2.

Newton suffered his first loss and fell to 2-1.

The quickest fight of the night, it took the visiting Barletta just eight seconds to floor the Abaco native with a single strike. Barletta easily side stepped an opening kick and landed consecutive blows to the head. He moved to 4-0 while Swain lost his debut.

In a fight that nearly went the distance, Lewis was able to outlast Garvey late in the third round. It was the second consecutive loss for the visiting Jamaican against a Bahamian opponent, after he lost to Kenny Neymour at BOMAC 1. With both fighters showing signs of fatigue, Lewis opened the third with a takedown. He controlled the action on the ground and with Garvey struggling to put up much of a defensive effort, Lewis connected on a series of strikes to force the stoppage at the 2:46 mark in the third. It was one of the more evenly matched fights of the night. Lewis landed a big kick in the opening exchange but both fighters were pinned against the cage for much of the first round. Neither could gain an edge on the ground and eventually returned to standing strikes just before the first round was done. They returned to standing strikes early in the second round before Garvey took control on the ground. Lewis escaped a near submission and a possible “ground and pound” finish in the round. Lewis moved to 1-1 after he lost his debut at BOMAC 1, while Garvey fell to 1-2.

In a matchup of previously undefeated fighters, Smith overpowered Brown for the second win of his career. The usually elusive Brown avoided several strikes early in the match, but Smith would eventually catch up to him and landed a flurry of knees and strikes. The referee determined Brown was unable to defend himself after he was staggered by several blows to the head and called the fight at the 46-second mark in the first.

It was the second consecutive win for a Trinidadian fighter over a home favourite. In the only heavyweight match of the night, both fighters traded strikes and kicks for nearly the duration of the fight. Both were fairly tentative for most of the fight, before Rodulfo found an opportunity to counter and landed a strike which floored Pierre. He followed with a series of punches to force stoppage just as the first round bell sounded.

After grappling on the mat for three rounds, the visiting Miller from the United States outpointed the home favourite. In his debut, M Miller went immediately for a takedown and it was clear he intended to dictate the pace of the fight on the ground. That’s where the bulk of the match would be played out as both fighters struggled to find an opening. M Miller reversed a rear naked chokehold in the third, but was on the defensive for most of the match. TJ Miller improved to 2-1 after his loss to Giovanni Johnson at BOMAC 1.

The first women’s cage fight hosted in the Bahamas lived up to its expectations and provided some of the most exciting moments on the card. Robertson came in as the more experienced fighter and looked every bit the part throughout the match. In fact, the most experienced fighter on the amateur card, male or female, improved to 7-2 with the win. Camden fell to 1-1. Robertson opened with several kicks before the fight shifted to the mat for the first and much of the second round. Camden opened again with strikes in the third, winning the battle on their feet before Robertson took the fight to the ground once again.