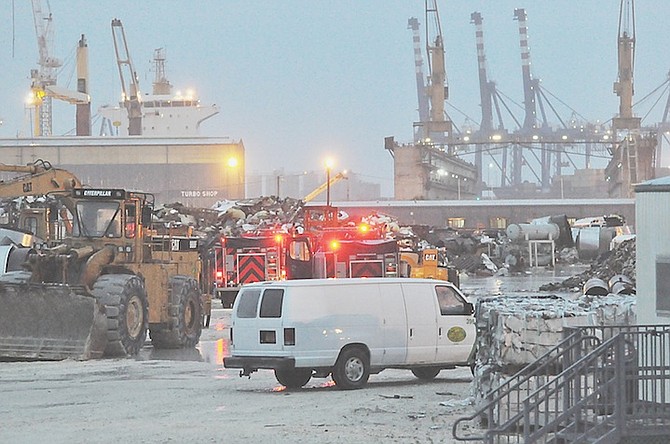 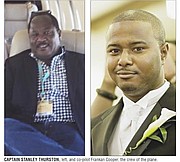 POOR decision-making by pilots caused the Learjet crash that killed Dr Myles Munroe and eight others in Grand Bahama last year, the final report on the incident says.

The jet was piloted by Capt Stanley Thurston and co-pilot Frankan Cooper.

The jet crashed on November 9 as the pilots made their second attempt to land in rainy weather with poor visibility. The crash shocked the nation, resulting in numerous tributes from around the world being paid to the influential Dr Munroe, founder and president of Bahamas Faith Ministries International (BFMI), and the other victims.

The report, which comes nearly four months after the incident, says: “The Civil Aviation Aircraft Accident Investigation and Prevention Unit (AAIPU) has determined that the probable cause of the incident was ... the poor decision-making of the crew in initiating and continuing a descent in IMC (instrument meteorological conditions) below the authorised altitude, without visual contact with the runway environment.”

A summary of the report released to the media yesterday said: “A fireball lasting approximately three seconds was observed as a result of the contact between the aircraft and the crane. The right outboard wing, right landing gear and right wing fuel tank separated from the aircraft on impact.

“This resulted in the aircraft travelling out of control, some 1,578 feet, before crashing inverted into a pile of garbage and other debris in the City Services Garbage and Metal Recycling Plant adjacent to the Grand Bahama Shipyard.”

The jet was “some 3.2 nautical miles from the runway threshold” when it struck the crane, the report says.

The investigation into the crash included an analysis of the cockpit voice recorder and digital electronic engine monitors on board the plane.

The analysis involved officials from the Department of Civil Aviation, Federal Aviation Administration (FAA) and Bombardier, the manufacturer of the Learjet aircraft.

Officials met last December at the headquarters of the National Transportation Safety Board in Washington, DC to review the relevant technology.

A source close to the investigation told The Tribune in December that a toxicology analysis of the pilots revealed that they had consumed no drug that could have impaired their performance.

Nonetheless, the source said the pilots could have turned the aircraft around and return to New Providence rather than attempt to land the jet for a second time.

Where is the full uncensored report. That is what we need to see; along with CVR transcripts and FDR information. We don't need a summary of the report's findings, that tells us nothing in detail.

It was the Tribune's Freeport reporter Comrade Denise Maycock who in a December 12 story reported that: "Investigators have found the 'voice recorder' and the digital electronic engine monitors from the ill-fated Lear jet which crashed on Sunday in Grand Bahama, killing all nine people on board, including religious leader Dr Myles Munroe. And, that the Department of Civil Aviation said it is anticipated that these "critical pieces of equipment" will assist investigators in determining the cause of the crash."

My question for Comrade reporter Denise is; why did you never flow-up as to why the content of the voice recorder have never been made public. Isn't it a normal flow of the investigation process, for the crews voices to be released to the media as soon as they are in the possession of the crash investigators?

Some countries, like Canada as just one example, do not permit such transcripts to be made public outside of court orders pursuant to legal actions being taken. The prohibitions in Canada on the recordings from Air Traffic Control on the other hand, are less restrictive. I don't know if we have such prohibitions here but if the media were doing its job in this regard, it would know that and should be able to tell the public the same.

Comrade you are incorrect. Within days of crashes in Canada their safety board releases transcripts of the air traffic control recordings but have been known to have refused to release the audio itself, saying it contained personal information that was not relevant to the ongoing investigation.

Comrade I have no issue with you but it is standard policy for cockpit audio recordings to be immediately be made available to the media the world over. Only in extreme cases have audio recorders from Canada not been released and even then later court judgments have ordered them released. One case in point was the crash of SwissAir and although it took 8 long years of legal battling before the Canadian courts for the audio's release, eventually were ordered released to the media. Comrade I have spent a good number of years in the cockpit.

Okay. You still have said exactly what I said, which is that outside of court proceedings, CVR transcripts in Canada are not published for public consumption. An article of Law in Canada prevents such release outside of court proceedings. Whether The Bahamas has similar restrictions, who knows. The provision of information in this country is always problematic so I don't see this matter being any different, though such matters ought to be different.

TalRussell what's up with this comrade BS are you Russian, and did those Cranes have proper lighting on them, in bad weather you do not have to see the run way if you are fallowing your instrument training you should be able to land a jet with out seeing the landing strip to a point.

"TalRussell what's up with this comrade BS are you Russian"...he/she is obsessed with the term "comrade". It's so played out.

Because Comrade Tal can hear when the bells of battle call for action, regardless which political party or politician is doing the people wrong. Besides, Comrade is mentioned in the bible several times as being the soldier.

Multiple-homicide caused by gross negligence of the flight crew. The hiring of the flight crew and responsibility for ensuring their competency rested with Dr. Munroe as the key principal behind both BFM and the U.S. company which owned the aircraft that crashed, killing all on board. In the circumstances it would be patently wrong for Dr. Munroe's children and BFM to be the exclusive beneficiaries of the life insurance benefits paid out on policies that covered the life of Dr. Munroe and/or his wife.

Obvious as all hell. Bout ya'll need to see the report....

In my opinion they crashed because Myles was pushing the pilot to land.

Okay; that is still just an opinion though. None of us know that to be fact or not, no matter how strongly plausible we believe it to be.

It is abundantly clear that the aircraft that crashed and its flight crew (pilot and co-pilot) served the business and other interests of BFM and, therefore, for all legal intents and purposes effectively "belonged" to BFM. Accordingly, any life insurance benefits received by Dr. Munroe's children and or BFM should be apportioned in a fair and equitable manner among all the passengers that perished as a result of the errors attributable to the flight crew.