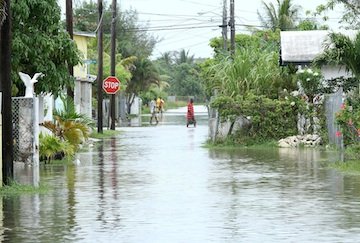 The Pinewood area has been prone to flooding after heavy rainfall.

OFFICIALS are expected to complete drawings for the new Pinewood Gardens drainage system within the next two weeks, according to the constituency’s Member of Parliament Khaalis Rolle.

Yesterday Mr Rolle said he could not confirm the total cost of the project until all bids were submitted to the Ministry of Works. Initially, it was projected to cost taxpayers around $13m.

He told The Tribune that the Ministry of Works will send the project out to tender when the drawings are finished.

“They are still going through the design phase,” Mr Rolle explained, “for the solution that we proposed. The team is doing the drawings and they had a meeting about two weeks ago between the consultants and the Ministry of Works along with my team that is working on our behalf.

“We anticipate that they will have the drawings completed within about two weeks and then Works will have it packaged to go out to tender. Once that is done, obviously it has to go through the funding phase with the Ministry of Finance.”

The MP said his constituents were looking forward to finally getting relief from a problem that has plagued the constituency for decades.

He said: “This is something that has been a long time issue. It has been a part of the history of Pinewood from the beginning and individuals would like to see it resolved. What we are proposing would provide the solution that most residents desire.

“In fact, one woman said she has been there for 28 years and this is the first time she is hopeful that something could be done with the flooding situation.”

In 2013, Mr Rolle told this newspaper that the project could cost up to $13m.

Ministry of Works officials have said that in order to rid Pinewood Gardens of severe flooding the entire existing drainage system would have to be done away with.

Engineers have explained that the drains did not function effectively during heavy rainfall. In Pinewood there are more than 80 drainage wells with depths between 150 and 200 ft, however, the area’s geographic characteristics make the wells inefficient, officials said.

Regardless 5 years, 4 months ago

Will the developers of this subdivision be looking after any of these costs? As some of them enjoy substantial profits from the fuel supply contract to BEC, surely they are in position to at least offset some of this hangover from original poor planning.

Franky Wilson aka Snake was the developer of Pinewood Gardens and should now be the one footing the entire $13 million drainage system bill!

Exactly, someone made millions of dollars out of this subdivision. Now the Bahamian people must pay for their shoddy design and execution of a private subdivision. Absolute theft of public funds! The developer must be held accountable.

Hope they are not planning nothing mechanical that will break down twice a week and not work when the rains come. Pinewood was originally planned as an upper class subdivision. But after the developers found out it was prone to flooding the developers cut the size of the lots and dumped them on poor people. Some persons were so anxious to own a piece of the rock they still bought houses after hearing the horror flooding stories.

I too am concerned about what are the mechanics of the drainage system proposed? We are not a society that maintains complex processes very well.

The governmental authorities need to protect consumers better. Regulation, environmental and building codes should be strengthened to prevent a repeat of the Pinewood fiasco. While some of these folks bought into Pinewood after flooding was known to occur I suspect it was miscalculation on their part or they were duped.

Regardless of how we got here, or the fact that many of these homes are valued at less than $250K which means they don't pay Real Property Taxes, we need to fix this problem. So I support using public monies to do that.

However, government should make ever effort to recoup the monies over time. If this means going after unscrupulous developers, realtors, contractors or lawyers using existing laws they should do so. The home owners who live in Pinewood should be levied a "Drainage Tax" to fund the cost and ongoing maintenance of the system. Additionally the homes in the area should be reevaluated and all valued for more than $250K should be made to pay their property taxes. There's no such thing as a free lunch, or drainage system.

Sounds like a lot of planning and drawing and scratching of heads. Did anyone of them think to consider that this would not be the very first neighborhood drainage system to exist on the planet Earth and perhaps get some plans or solutions from other places abroad and then simply tweak them a bit to fit the Pinewood specifics?

Kinda like the airport in Abaco - which has a control tower than cannot be used because it is too short, and an upstairs level that cannot be used because there is no fire escape. I'm sure if they had check on other airports - like in the Caymans, Aruba, St. Lucia, Nova Scotia Canada, etc. they would have easily learned the minimum height of a control tower, and also whether or not fire escapes are required by the FAA. In fact, a lot of high school students in the Bahamas could have looked up this info for them online. But, heck, it was only $28 million and it wasn't their money anyway - so who cares. In this case now it's only $13 million and it ain't their money either.