MP speaks out against domestic violence 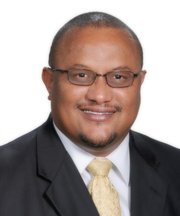 IF A man hits you, he is not just hitting you, he is hitting your daughter, your unborn granddaughter, and he is teaching your son how to hit a woman, Marco City MP Gregory Moss said at an anti-domestic violence candlelight vigil in Grand Bahama.

Mr Moss said that abused women must realise their worth and be a strong example to their children by teaching them not to accept abuse or to be an abuser. The Freeport attorney recalled that his mother, too, found herself in terrible relationships but was always able to overcome them. “My mother just had to leave bad relationship after bad relationship and we ended up living a hard life but we survived,” he told the small gathering at the Richard Gaitor Park in the Pioneer’s Loop Subdivision on Sunday.

Mr Moss said that women are often faced with difficult decisions like where will they go, how will they feed their children and where will they sleep. He said that abused women can begin to make a difference by the renewing of their minds. “You deserve better. If you take that blow, you teaching your daughter, and granddaughter to taking that blow; and your son to give that blow.”

Although he and his eight siblings grew up poor with no father around, Moss said that his mother taught them self-respect and dignity. “My mother had nine kids, no father, no husband and we ended up living in one of the biggest ghettos in Freeport. Women keep searching for love and keep finding these terrible relationships and not having the simple solutions of walking away.

“My mother was a maid all her life, but she taught us to have dignity and respect for ourselves, and not one of us seven brothers has every raised a hand to any woman,” he said.

The MP despises the phrase domestic violence. “It pretties up something that is so horrendous; it is assault and battery,” he said. He also believes that perpetrators who kill deserve the harsh punishment of death.

Tiffany Smith-LaRoda, a 30-year-old mother of four, was killed in a domestic violence incident on May 24, 2005, in Grand Bahama. Her sister, Shavon Munnings, founded Fallen Angels to bring awareness to domestic violence abuse and every year holds a vigil in memory of her sister. Her goal is to establish Tiffany’s Haven, a shelter for abused women and their children.

She hopes that her efforts can save even just one woman before it is too late. During the vigil, Pastor Beckles, of Life Community Church, pledged his support to Ms Munnings and what she doing by allowing her organisation use of the church facilities.

Pastor Adriann Gilbert and Prophetess Jasmin Dareus also encouraged women not to suffer in silence and stay in abusive situations.

Pastor Gilbert, who knew Tiffany, said that she was packing up her clothes to leave that day when her husband walked in and stabbed her to death. She said that women who want to leave and are afraid because of threats should have the police accompany them.

“Tiffany’s death was the reason for this movement and we thank Shavon for being brave and stepping forward,” she said.

Mrs Dareus, who was also a victim of domestic violence abuse, said that she grew up watching her mother being abused by her husband. “I am a woman that was abused for many years and I watched my mother deal with it. That was all I saw, but through the Lord and his Word I had to renew my mind,” she said.

Mrs Dareus said that abusers are, jealous, controlling, put women down and make them feel worthless and isolate them from family and friends.

“You have fellas who will stalk and monitor you, they check your cellular phone and threaten to kill you and use children to force you to stay with them. Every time they beat you, they apologise and bring flowers, take you on trips and to jewellery stores and say they love you. And then, they starts all over again - the beatings occur in cycles.”

Mrs Dareus said that a man who hits does not know what love is. “Love should not hurt. It does not impose or insult. There is no fear in love,” she said.

She urged people who are experiencing domestic abuse to contact Shavon Munnings at 646-2854, or Life Community Church on Polaris Drive, or Kingdom Harvest Global Ministry in the International Bazaar.

Interesting. So i am guessing men are not victims of domestic violence. This article is bias. If you really want to tackle domestic violence do not point fingers at one gender and ignore the other. Find out the root problems of these incidents and tackle them equally.

This article is really about a woman who lost her sister to domestic violence and she is trying to bring awareness to this problem,which mainly affects women. Maybe you can start a campaign for abuse men.

This article is really about a woman who lost her sister to domestic violence and bringing awareness to women who are mainly the victims. Maybe you Pat242 should begin the cause for abuse men.

Persons often ask me when am i going to start a program that speaks about abuse men and boys suffer. I am still doing my research on the topic.