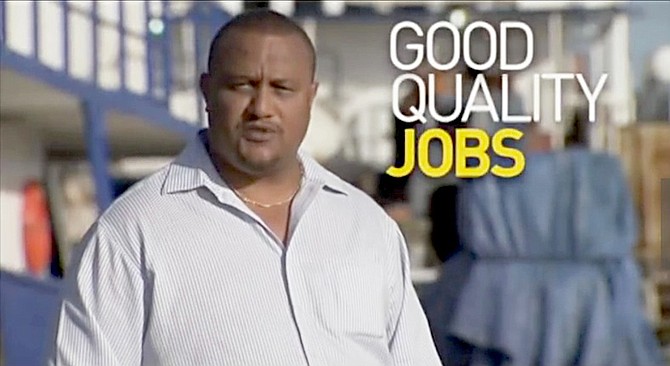 Greg Moss in the PLP campaign video trumpeting the New Generation of PLPs.

Do you think Marco City MP Greg Moss will win his seat as an Independent?

Mr Roberts said that Prime Minister Perry Christie invited Mr Moss to join the Cabinet after the last general election, but claimed that Mr Moss “pouted, complained and preened publicly” when his conditions were not met.

“Gregory Moss was one such young Bahamian who was given the opportunity and privilege for public service and more so, the prime minister recognised his talents,” Mr Roberts said in a press statement.

“As the chairman of the National Insurance Board (NIB), Mr Moss was publicly insubordinate to the nation’s chief and was relieved of his duties. Even within the context of a democratic culture, an organisation can have only one leader or boss at a time and the tail cannot wag the proverbial dog.”

On Monday night, as he wrapped up his contribution to the budget debate, Mr Moss disclosed his plans to resign from the PLP with immediate effect. His resignation letter was sent to Mr Roberts, Mr Christie and House Speaker Dr Kendal Major yesterday.

In that resignation letter, Mr Moss said he has concluded that as the PLP heads into its fourth year in this term as the governing party, he no longer believes his values for the country are shared by the party’s leadership.

Mr Moss said while he continues to subscribe to the political philosophy of former Prime Minister Sir Lynden Pindling, the PLP no longer has the philosophical underpinning that prompted its growth.

Meanwhile Mr Roberts, in his statement, thanked Mr Moss for his service and wished him well in his future actions. The PLP, he said, is like any family or organisation where differences are either reconciled or members part ways.

“Such is life in the cut and thrust of not only party politics but life in any organisation,” he said.

“Moss obviously has a conscience and a conviction and what he does shows democracy. He cannot sit by and watch what the PLP has done and has not delivered. His conscience would not allow him to be a part of continual broken promises and lack of leadership. Those ‘new generation’ of leaders seem totally unhappy. Look at Moss, (Dr Andre) Rollins and (Renward) Wells. The PLP is a party of slogans and promises and the new generation fell for it and their eyes have been opened. I applaud Moss for what he has done.”

As to whether the FNM would accept Mr Moss into its fold if he chose to join the official opposition, Dr Minnis said: “We are open to discussing the way forward with any Bahamian who wishes for that which is better than this PLP government.”

However, Mr Moss has said that he has no intention of joining the FNM, but will remain an independent representative for Marco City.

Comrades who following politics, may I be allowed to paraphrase as Will Rogers put it: “Both the PLP and FNM political parties have their good times and bad times, only they have them at different times.”
Come the 2017 General Elections I don't think any rational thinking PLP could really believe the results will be "too close to call, or is it Chairman "Big Bad" Brad?

Come on people lets be honest here, Moss didn't squander and opportunity for public service. There is not one politician that I know of that does his politics in the pursuit of public service.

So lets be honest about it. They only reason any and all of them seek and sit in office is to steal for themselves and their friends. Each and every one of them! Now some may deny this, but notice, there are no politicians sitting there stating that the guy sitting beside them is a theif, giving and evidence and paper trail, and we no the thieving is going, so if they aint saying anything , they are at least in part responsible by doing nothing, if not a participant. Now of course we here accusations across party lines, but thats just a show they put on. Both teams are in it for themselves, they are two factions, with different names, though of essentially the same ideology. Tell me when the last one was sent to jail? How many millions have they stole the last 10 years? And that ideology these thieves all share, is to essentially see that the minimum food, education and healthcare makes it to the people, but just enough to keep us alive so that we can serve as modern day slaves, not quite enough education to get close to smart, not enough money so you can be free and think about what's going on, and not enough healthcare to live long and healthy.

Seems this would be a fitting time for ME also to offer my resignation from politics. The arrest of a protester in Freeport yesterday during a peaceful protest, and the declaration and validation by the Court that we as citizens need PERMISSION to protest says all that needs to be said about our state of affairs.

Our comments on here and on Facebook and wherever else are actually a form of protest - in a way. If protesting is illegal, then it might not be long before these online activities also lead to arrest. The sad thing is that in most countries where people are not free, the economies usually suck because people have no incentive to "rise above" and perform. I hope that situation will not befall our beloved nation.

In truth, all of our comments on here are really a waste of time anyway - because the only time our "voice" means anything (perhaps) is during one day every five years.

Best of luck and best wishes to all.

Amen! Let's all give up!

Stink mouth man needs to just go in the corner and hold his disgusting breath. The story is "Sell or we will shut you down", that is how he got Nassau Flight Services. Corrupt, dishonest, crook. People know your secrets you nasty human being. Nothing without the head crook, just like his friend that can't keep a business open to save his life without the benefactor.

Tell the accused rapist chairman to sit down and shut up. Maybe someone should take him aside and give him an acquaintance to the truth. However, the truth is something that the PLP exercise a lot of effort in trying to kill.

Hopefully Hon. Greg Moss's departure from the PLP marks the beginning of a domino effect leading to a core of independents forming a coalition focused on exposing and combatting corruption.

The only solution to saving our country is firstly get rid of the PLP and FNM to even begin unraveling systemic corruption in ALL the highest of places that has rendered our country nearly totally dysfunctional.

“golden opportunity for public service". you don't have to change much around in this sentence to find the true reasons why many politicians are politicians.