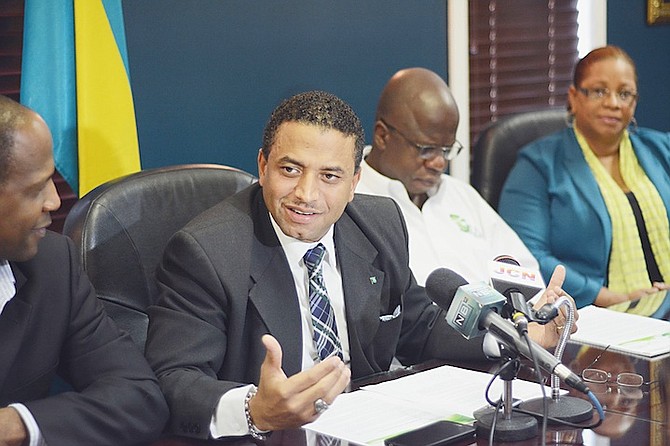 Mr McCartney said Commissioner Ellison Greenslade “must intervene in this obviously criminal matter and bring the individuals at the centre of the allegations to justice”.

Mr McCartney also accused the government of being “content to overlook criminal activity when it occurs in the upper echelons of our society’. He said by now the government should have moved “to send a strong message to the people of this country that it is serious about addressing corruption at all levels”.

Mr McCartney’s comments come amidst the government’s investigation into French Power Company Alstom (formerly ABB) paying more than $300,000 to an unnamed government official to secure the purchase of a slow diesel generator for the electricity company nearly 15 years ago.

The bribery claims were unearthed in a $722m plea agreement between Alstom and the United States Justice Department on the matter, which The Tribune published in December.

Last month, Attorney General Allyson Maynard-Gibson remained tight-lipped about the progress of the investigation, and expressed concerns that further public comments could harm the future of the government’s probe into the matter.

Attempts by The Tribune to get an update from her on the matter were unsuccessful up to press time yesterday.

Yesterday, while also calling for police involvement in the investigation, Mr McCartney said Bahamians “across the country have yet to receive the answers that were promised by this Christie administration” regarding the probe.

“Even as our nation’s leaders pledge their commitment to addressing high levels of crime in the country, it appears that this government, like others before it, is content to overlook criminal activity when it occurs in the upper echelons of our society,” he said. “The government should have moved by now to send a strong message to the people of this country that it is serious about addressing corruption at all levels and further, that no man or woman, irrespective of their political connections or influence is beyond the reach of the law.”

He added: “The Democratic National Alliance repeats its call for that individual to be named and made to feel the full brunt of the law. The commissioner of police must intervene in this obviously criminal matter and bring the individuals at the centre of the allegations to justice.”

Last year, Tribune Business reported that, Alstom, as part of a $772 million plea bargain settlement with the US Justice Department, admitted that it had bribed an unnamed Bahamian “official” to ensure it won the bid to supply BEC with a slow speed diesel generation unit in 2001.

The alleged bribe was made between 1999 and 2001, during the time of the former Ingraham administration.

The official, called “Official 8”, was said to have been paid more than $300,000 to help secure the contract.

Alstom pleaded guilty and agreed to pay a $772,290,000 fine to resolve the charges related to a widespread scheme involving tens of millions of dollars in bribes in countries around the world, including Indonesia, Saudi Arabia, Egypt and the Bahamas.

It was claimed that Alstom falsified records, ultimately paying millions in bribes for help in obtaining more than $4 billion in projects, including the Bahamas.

Mrs Maynard-Gibson has previously said that the Attorney General’s Office requested information from the US government regarding the bribery allegations. She also reiterated that the government was taking the matter “very seriously”.

Meanwhile, former Deputy Prime Minister Frank Watson, who had ministerial oversight of BEC at the time of the allegations, has expressed his “difficulty” with the situation to The Tribune.

He has maintained that he did not know of any controversy surrounding the purchase of the generator, or the events that allegedly took place.

We are ruled by criminals, FACT! Nothing will come of this just as nothing ever comes of anything to do with the political elite of this country. "I can't recall." What needs to happen is people get together hire some American lawyers and private investigators to look into this. Hell, we should get some private investigators to look into dealings right here, RENEW, BEC, PMH, BAMSI, Junkanoo Carnival, are just a few of the rotten fish floating in the stink pond of this government. I would gladly pay for some truths and truthful figures. All I know is this government seems to be running amok. Bahamians better wake up and wake up fast because Bahamians are the only ones that are going to pay for the political elites misdeeds. The rich and powerful will just jump ship when she starts to sink.

You said it sir. There is nothing more to say.

Mr. McCartney is an honest man of good intentions, obvious when you hear him speak.

Curious, is there a statute of limitations to be considered in this instance?

If Allyson cannot give the public a simple update (yes we have received the necessary information from the U.S. OR no, we are still waiting to receive it but expect it in two weeks OR we now have the name of Official 8 and we are in the process of interviewing that person and preparing to make an arrest) then she should also be investigated for impeding justice as it would appear from her silence that nothing is being done.

Track down the finger-lickin lover for a free bucket KFC and your investigation will lead the Tribune to the name of the former BEC board member crook. Investigation closed.
Comrade why do you think the AG and including the Tribune are not aware of the not so secret 1/4 million dollar thief, who court records will also confirm actually demanded a free bucket of KFC, during their negotiations for the 1/4 million. The free bucket KFC is not made up.

I would have believed it was a Board member if the Minister Responsible did not report that it was a cabinet decision.

If the DNA was serious they would hire a U.S. lawyer and get them to find out the names. The U.S. has Freedom of Information, it can't be that hard.

Comrade I made a request to a friend a reporter at the Miami Herald to do some digging but you are so right about the DNA being all talk.

“Even as our nation’s leaders pledge their commitment to addressing high levels of crime in the country, it appears that this government, like others before it, is content to overlook criminal activity when it occurs in the upper echelons of our society,” he said. “The government should have moved by now to send a strong message to the people of this country that it is serious about addressing corruption at all levels and further, that no man or woman, irrespective of their political connections or influence is beyond the reach of the law.”

What a beautiful quote filled with hard hitting facts that describe our exact attitudes toward criminal behavior in this country.

Whether you agree with Mr. McCartney's politics or not, the above quote cannot be refuted by anyone with any sound reasoning ability. As a Bahamian, I am so disappointed how blatant evidence of criminal behavior is swept under the rug time and time again.

Until our leaders have the conviction to realize that crime is crime and that you should be prosecuted no matter your political affiliation, I can't see any hope of a better country. Greg Moss likened the PLP and the FNM to a bus that changes drivers every five years.

If the DNA has the means to get the report stating the name of official X, then by all means I agree that they should move forthwith. Otherwise their commentary would be viewed as a smoke screen.

The political elite protect one another and are all part of one club. They do not believe what they are doing is wrong nor do they believe that their corrupt nature hurts the nation. They think they are ENTITLED to whatever spoils they can milk out of the system. This is ingrained in their thought process. The kickbacks, payoff's for information, special consideration, insider dealing, property for permits, shares for approvals are all fair game as far as the political elite are concerned. To them it is just the normal day to day way things are done in this country. Until THEY start to feel the hurt they are putting on the rest of the nation nothing will change.

I would bet a million dollars that the P.M. has a shell company that owns shares in BPC. He would never be stupid enough to put his name to the shares but these lawyers are trained to tweek the law. Somebody knows and it may take a hundred years but one day the TRUTH WILL COME OUT just like it is starting to come out about the drug years. http://www.pbs.org/wgbh/pages/frontli...">http://www.pbs.org/wgbh/pages/frontli...