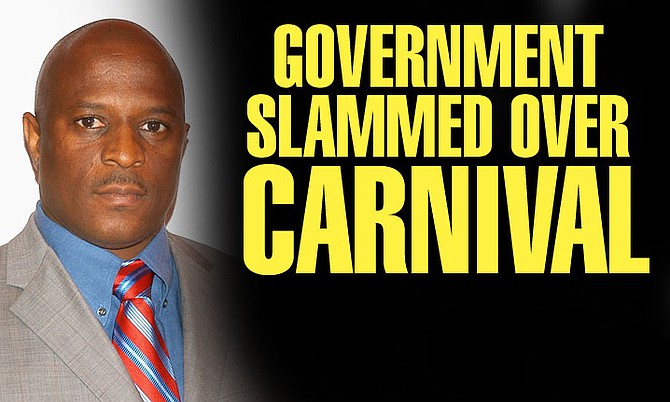 FREE National Movement Chairman Michael Pintard yesterday criticised the government for failing to announce the name of the international artist who will headline the Bahamas Junkanoo Carnival.

He said it was “inappropriate” for Progressive Liberal Party ministers to “come at the 11th hour” and “suggest that it is not a big deal that such a headliner has not been identified”.

Mr Pintard, who has been critical of the proposed event, said Bahamians who have to fund the bulk of the festival’s costs ought to hold the government responsible for “any and all major decisions with respect to the planning, marketing, and execution of this event.”

Mr Pintard’s statements came after Tourism Minister Obie Wilchcombe said last week that he is not concerned about the delay in delivering the announcement, adding that the goal has never been to let an international artist dominate the festival.

However Paul Major, the head of the Carnival Commission, recently admitted that the issue would compromise the commission’s efforts to secure international business.

Mr Major also conceded on Monday that he would have liked “to have known by now” the name of the international artist the government will choose to headline the event.

Yesterday, Mr Pintard said the delayed announcement is “yet another example of the poor planning of particularly the government ministers who have oversight for this event.”

He added: “The commission as well as the various Ministries of Tourism and Culture, underscored the importance of having an international headliner, because in their estimation that was pivotal in attracting international attention and assisting them in putting heads in bed,” he said. “In others words, the international media and others would be able to see Bahamian talent as a result of having someone of tremendous clout in the cultural community internationally leading the concert. That was the rationale.

“We did not share that view in the FNM. We believe the PLP and the commission is wrong in that regard. However, if that is their rationale, it is inappropriate for them to now come at the 11th hour that it is not a big deal that such a headliner has not been identified.”

Mr Pintard also said even if the government were to announce the headline act now, it would not be enough time for visitors to plan trips to attend the event.

“Even if they were to identify a headliner right now, they could not accomplish what they indicated was their original goal, because in order to attract heads in beds, you need advance time so that the wholesalers and travel agents are able to put together their packages,” he said. “Chances are, they’ve already made their plans. They’ve already committed themselves to other engagements in the continental United States or in some other jurisdiction.”

Junkanoo Carnival will be a series of cultural events scheduled to take place in April, in Grand Bahama, and in May, in New Providence.

Officials have indicated it will cost $9m to stage the event. Last month it was revealed that only $1.5m has been spent so far.

Previously, Mr Wilchcombe would not confirm reports that the government was trying to lock down Barbadian singer Rihanna to perform at the festival. However, he said, the government was “giving consideration” to “certain names” with which it had been presented.

What is exactly is Pintard's actual point of contention? Wasn't their initial view that we don't need an international act to headline a Bahamian festival? If his point is that the government can't do anything right then yes, that's clearly true. But otherwise, what he should be concerned about is whether $9million will actually be spent and on what, since there will be no headliner pulling the $2million they claimed they were wanting to pay Janet Jackson.

The sad fact is Junkanoo Carnival = Slush Fund. There will never be a true accounting for the money spent. Plenty PLP's gonna be flush though.

There is no headliner. They can't find an artist with any fame willing to do it. It is a step-down for a pop (current) celeb to be headling in a country so ridden with heavy crime. They could pay a 'has-been' to come because they are need the money- but no current artist will do this gig and that's what the government is finding out. You don't pay out 1 million or more for a headliner then keep the name mum....that's what you are paying for, their drawing people to the event-- Sad for Bahamas because they are losing BUSINESS from us tourists....you know, your MAIN SOURCE OF INCOME as a country. Stupid people are running your government and ruining your chances of your people having a good lifestyle.

Hey you ain't hear, the P.M. say the Government don't do stupid!

shush folks, they bringing michael jackson back from the dead.

Sooooooooooooo for Christ's sake ................... just make Baha Men the headliner with Lenny Kravitz, Geno D, DMac, Ancient Man, and of course the star act should be the heir apparent to Ronny Butler - KB. But that wont happen because of politics.

"Ta Da". I heard her for the first time yesterday, knew about her for years but never heard any of her songs... She has REAL talent, her genre seems to be rap but its intelligent and she bigs up the Bahamas in her lyrics. For anyone who hasn't heard her before, please listen. I don't know her from Adam but I recognize talent when I see/hear it

Yeh........ throw her in the mix too along with Veronica Bishop as the Carnival show-stoppers

God forbid what a tragedy,we using Bahamians for we own carnival.

Carnival will be a great success for the Bahamas!

observer2, you birdie in disguise hey? If not you are a government agent or a stalwart councilor. As much as I want it to succeed (I hate to see our money wasted, we ain't gat none) only those set or a fool would not have doubts about this festival.

The money will not be wasted it will go into the pockets of hard working Bahamians working in the music industry, and others, which they will spend right here in the Bahamas. It is a win, win situation . The country must keep on moving. we can not just stand still.

The money has already been wasted birdie. This was a gold mine for the Bahamas and it couldn't have been managed worse if they tried. Maybe next time they will block the young people hustle and listen to sensible people . They were told from DAY ONE "the Bahamian public is the market you should be targeting" and they laughed it off with their stupid "number of hits the word carnival gets" argument