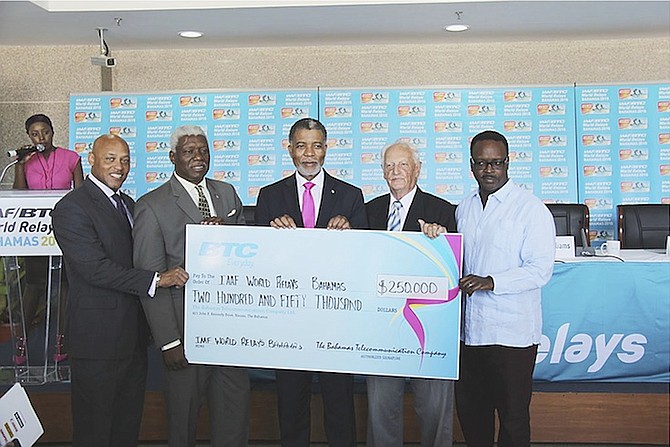 WITH a title sponsor now on board for the country’s biggest sporting event, the second edition of a “Bahamazing” athletics experience is now in its final stages of preparation.

In the words of Local Organising Committee chairman Keith Parker, “after today we should all be referring to it as the IAAF/BTC World Relays Bahamas 2015.”With its $250,000 investment, the Bahamas Telecommunications Company joined the World Relays sponsor family as “Title Partner”, the highest rank within the LOC sponsorship programme.

“We’re one big step closer to being prepared,” Parker said. “This is a very important role and I must say the exposure for the title sponsor is incredible.”

“BTC has always been embedded in Bahamian culture and sponsoring Bahamian athletes,” he said. “So it was not a tall order or a stretch to sponsor these games and particularly because of the success that took place in 2015.”Williams outlined BTC’s Internet Protocol television services as a tool that will expand the reach of the event into even more Bahamian households.

“BTC right now as we speak is deploying IPTV into some areas of the Bahamas that has not had television. We have got people in Cat Island, Bimini, Andros and Inagua all testing IPTV. These folks for the first time will have the ability to see the World Relays live without having to come to Nassau,” he said.

“I think beyond the sponsorship, the fact that we are removing these barriers that now marginalise Bahamians because of the telecommunications experience, brings more value to me than maybe the 150 million people across the world that will be watching the games. The fact that Bahamian athletes can have their parents and grandparents watch them compete here in the Bahamas, I think that is history making for us.”

During a press conference earlier in the week, the LOC revealed that Atlantic Medical and Coca-Cola will serve as the national partners, while the National Sports Authority, Commonwealth Brewery and Bahamas Waste are the first of the national products and suppliers.

“Launching something is the hardest thing,” said Minister of Youth, Sports and Culture Dr Daniel Johnson. “It was fantastic last year and the team is all here again. It is good to have experience at the helm and partners at your side. We want to let the Bahamian public know that we are going to be better this year.

The IAAF/BTC World Relays Bahamas 2015 is scheduled for May 2-3 at the Thomas A Robinson National Stadium.

Bahamas Association of Athletic Associations (BAAA) president Mike Sands, who serves as the CEO and vice chairman of the LOC, said they are getting ready to welcome the world once again to the Bahamas and showcase the Bahamas to the world via the television coverage.

And so far more than 1,060 athletes, representing at least 47 countries as far as Australia, were registered to compete up to Monday night. However, Sands said the IAAF has given all of the countries until April 20 to have their final team selection submitted to the LOC.