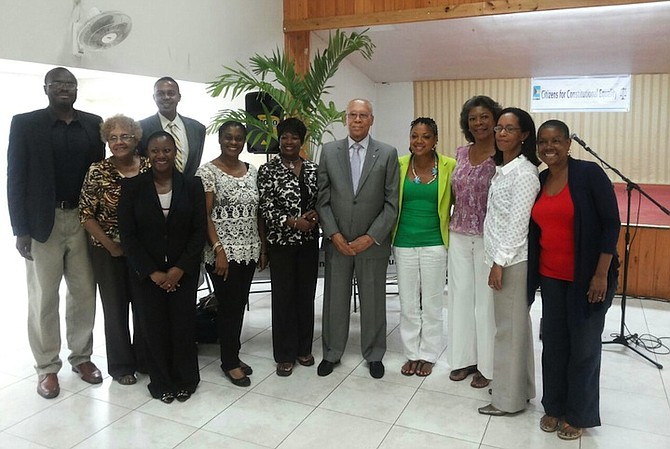 FORMER Governor General Sir Arthur Foulkes said if Bahamians vote against gender equality in the forthcoming Constitutional referendum “the Bahamas would be listed among those backward peoples of the world who still believe that accidents of birth like colour and sex should forever assign some people to inferiority status”.

Speaking at the launch for Citizens for Constitutional Equality on Thursday night at Holy Cross Parish Hall, Sir Arthur said there is no good reason why all four of the equality Bills should not be passed by Parliament and approved by the people in a referendum.

Last year debate began in the House of Assembly on amendments to the Constitution that seek to institute full equality between men and women on matters of citizenship and also eliminate discrimination based on sex.

The fourth bill has sparked much controversy throughout the country as some critics believe the Bill may be an attempt to garner support for same sex marriages.

"I have heard no convincing argument as to why the entire political directorate of the Bahamas should not be unanimous on the issue of equality for women. If some are hearing contrary noises from some of the people they represent, then they should go their people and explain why it is the right thing to do," Sir Arthur said.

"If we fail in this enterprise, the Bahamas would be listed among those backward peoples of the world who still believe that accidents of birth like colour and sex should forever assign some people to inferiority status.

"Both the call of history and the demands of justice require an end to this discrimination, and for the granting of access to the full fruits of freedom and equality for all.

"Never forget how a creative minority of citizens can help the majority eventually to do the right thing. Indeed, this is more often than not the only way that meaningful change has come about."

Constitutional Commission Chairman Sean McWeeney QC said last month it is doubtful the referendum will be held in June and admitted that despite the efforts of the commission, it is unlikely the Bills will gain the unanimous support of parliamentarians.

Despite the pushback from some members of parliament on the wording of at least two of the bills, Mr McWeeney said he does not think there will be further amendments.

Mr McWeeney did not say when he thinks the referendum should take place, but noted that the commission will be ready to focus its attention on education efforts in New Providence and Grand Bahama, to a lesser extent.

As long as (Bahamian) women continue to believe that their sole purpose in life is to be 'an help meet', the problem of women's inequality will always exist.

Why didn't he make this happen while he had the POWER?

He could have told the PM (when a cabinet post needed changing or appointing for example) that he will not approve the post, until this &#@* is taken care of.

But, I guess it's easier to "talk" while out of power, just like the rest of us.

He left government house and a women moved in soon after to do the job he was doing. How much more equality gonna wann?

Does the bible say same sex legislation is what a good Christian society is all about. Or is it an acceptable modern legal political syndrome - based on Greek democracy and so called equal rights for all. The next equal rights after this one will be the rights to marry your dog and so on - ask the animal rights people/dogs.

Please Bahamians, do not let people like Arthur Foulkes and the Fred Mitchels of the world destroyed the Bahamas. The call for Gender Equality is a call for HOMOSEXUALITY. I would rather be a backward peoples, than a sinner. We have lost our way under both the PLP and FNM after the death of Ping. We need new leadership in the Bahamas, leaders who believe in and FEAR God. Bahamian, just think, the Bahamas does not produce anything, but we were always able to survive. You want to know why, because we always had the FEAR of God. "I am the same God, today and forever"

I maintain that Sir Arthur was the most impressive GG to date. However, his views on the death penalty and gay rights is where we part company!