Pm Talks Of ‘Teachable Moment’ Amid Anger Over Govt Response 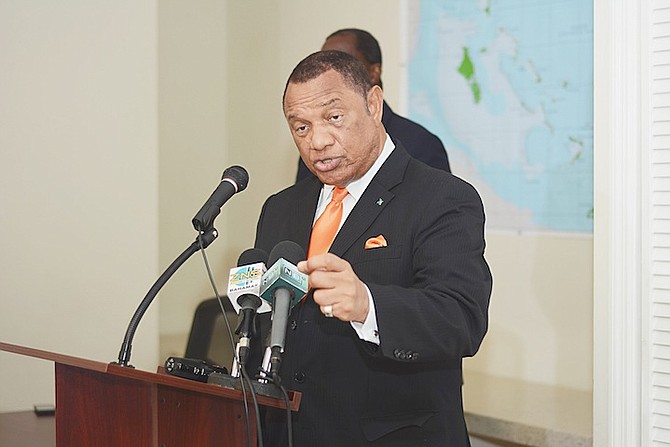 WHILE acknowledging the country’s ongoing “challenge” with storm preparation, Prime Minister Perry Christie yesterday said the passage of Hurricane Joaquin would be a “teachable moment”.

Mr Christie also urged Bahamians not to underestimate the seriousness of Hurricane Joaquin, admonishing residents to do what they could to prepare for the storm.

The Christie administration and the National Emergency Management Agency (NEMA) faced a barrage of criticism yesterday as reports surfaced that many residents in the southern Bahamas were caught off guard by the category four hurricane on Thursday. Some criticised NEMA for not providing status updates yesterday morning, as the storm churned through the southern Bahamas leaving flooding as high as three feet in some areas.

“There is still a challenge of preparedness,” the prime minister said. “And whether or not people are fair in their commentary or accurate, you’ve heard talk coming from islands of not having been prepared, being caught by surprise.

“The living experience of events to do with nature continues to be teachable moments in the life of a country,” he added.

He also said that “the government is fully aware of its responsibilities” and insisted that The Bahamas “cannot afford not to learn from our experiences and work towards ensuring that we empower ourselves through the knowledge we have gained from events that have taken place.”

NEMA has come under criticism for not providing frequent updates on the storm on Thursday. There were also concerns that residents in Mayaguana, Inagua, Crooked Island, Acklins, and Long Cay were not made sufficiently aware about the severity of Hurricane Joaquin in the hours before its landfall.

However, NEMA Director Captain Stephen Russell yesterday said that his organisation provided all affected islands with a “sufficient” warning ahead of the storm.

Sources within NEMA told The Tribune that around noon on Thursday, communication with the southern islands was cut due to weather, limiting the agency’s advisory capabilities into the afternoon.

At that time, social media websites became inundated with reports of catastrophic occurrences in those islands, particularly Acklins.

At yesterday’s press conference, however, Mr Christie assured the public that the government at no time lost all forms of contact with the southern islands.

He indicated that through satellite technology, a system that the government invested more than $60m in, he and senior members of the Royal Bahamas Police Force were able to “instantaneously” communicate with those islands.

“I called (Commissioner Greenslade)… because when distilled to its bare essence we have police officers in every island. To the extent that we were able to talk, we know that they were out there working to the height of this hurricane as it impacted Crooked Island and Acklins in particular,” Mr Christie said.

“I did ask the commissioner to do round-robin with the islands, to give us an assessment on what he found,” added the prime minister.

According to Commissioner Greenslade, based on his communications throughout Thursday afternoon, there was never any incident that could have resulted in a crisis.

The commissioner suggested that issues might exist in co-ordination between government agencies, assuring that his officers have been and will continue to hold their posts throughout the storm.

He urged Bahamians not to rely completely on social media reports to track Hurricane Joaquin.

That tweet read: “(Commissioner Greenslade) NEMA dropped ball, now you have to pick it up and execute for sake of nation or (people) will die!”

Recycled old news as the Tribune shuts down for the day!

september 24th is the last post from NEMA. Did they close down due to the hurricane?