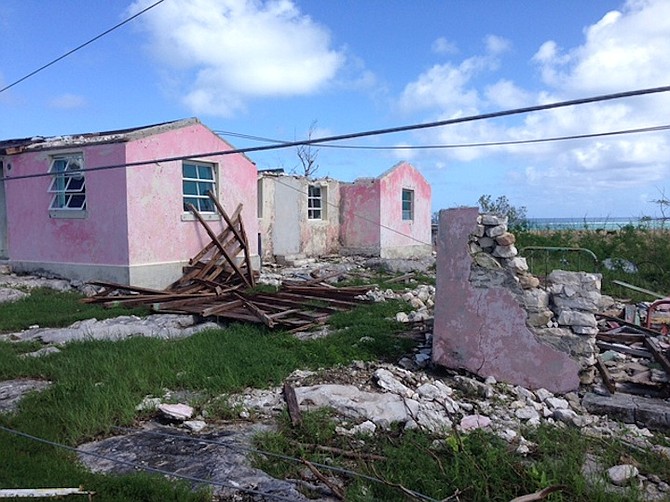 “Never in my forty-four years of life have I seen such devastation, it is on a Biblical scale…it is a true miracle that no lives were lost, every single person I have met has a testimony that tears, tears…” was the response given by former Senator John Bostwick II to members of The Tribune news team while on site in Crooked Island over the weekend.

Mr Bostwick, a co-founder of the Rebuild Bahamas team, and members of Save Our South (SOS), Head-Knowles, Radio House and The Tribune network of companies, spent three days and two nights immersed in and observing the conditions suffered by the residents of Crooked Island. Crooked Islanders have been forgotten by the Government of The Bahamas for more than three weeks after suffering the most devastating category five storm in 146 years to hit these islands so late in the hurricane season. His was a sentiment shared by each and every member of the team who travelled to the natural disaster zone that Crooked Island now is. 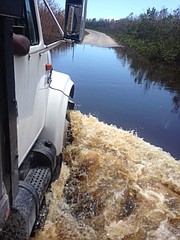 “This is catastrophic!” was the term used by Robert Carron, “I used to come here for summers as a young boy, I know these families, my God, look at this place, you wouldn’t believe it looking at it now, but this place was paradise…my ‘Uncle’ Basil built that bridge…” He was referring to the bridge that linked Chesters to Lovely Bay, built by former Member of Parliament for the island, the late Basil Kelly. The well-known bridge no longer exists. It too was taken by this beast of a storm that pushed tidal surges and swells of an already Super Blood Moon-swollen ocean ahead of 200mph sustained winds into tidal waves that swept over the island from the Sound – the sheltered side where there is normally miles after miles of shallows – depositing a lake of salt water almost a mile inland, at some points almost fifteen feet deep at its worst. 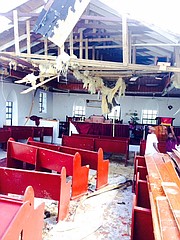 St John the Baptist Church in Colonel Hill, Crooked Island, which suffered extensive damage to its roof and electrical and sound system. If people would wish to donate to the church, please contact Patrick Farquharson at 558 1842.

“We call it the Red Sea. Not to confuse it with the Sea of Reeds that was also deposited between Colonel Hill and the airport…” explained Mr Ferguson as he drove the team through the devastated areas in the back of his dump truck and approached this massive inland salt water lake.

Mr Ferguson’s dump truck is affectionately known as “Noah’s Ark” as it is one of the only surviving vehicles that can cross the flood plains, one of which, the “Red Sea”, is at least four feet deep and runs for over a mile in every direction, including covering a major section of road that connects the two sides of the island. It effectively divides the island, separating people from food, family, services, supplies, the airport one way, the dock the other way. As the truck entered the water, the reason for the name becomes immediately clear, the water itself is a deep, rusty blood red. The stench of rot and decay belies the presence of disease and biting insects that swarm even as the truck moves through, doubling the risk of infectious disease yet the brave dedicated men of the Royal Bahamas Defence Force can be seen working in it; some paddling through in kayaks, while others, who are almost negligently ill equipped for the task, wade through waist high wearing only normal combat boots and fatigues armed with nothing more than axes. At the very least these committed men should have proper waterproof wading gear and chainsaws at their disposal.

Even though they lack the necessary resources, through sheer will alone they have scoured the community, borrowing all manner of supplies from food stuffs, chainsaws, and a large number of six-inch plumbing pipes to transportation. Transportation is a necessity because of the mechanical failure of the truck provided for their use by NEMA. One resident remarked that “that truck arrived here with a note saying that it needed some mechanical repair to its gears, but no parts were sent with it, just four tyres!”

Notwithstanding the limitations they, with the help of leading locals who are more than anxious to play whatever role they can to rebuild their communities, are beginning to pull together, using whatever resources are on the island to try to start to address the various catastrophic issues that plague Crooked Island. Their first attempt is to part the “Red Sea”’ bringing it to a level where the road is passable. They plan to use a locally sourced commercial immersion pump and have scavenged six-inch pipe (as joined by couplings flown in by this media group). Twenty-one days after the storm, the weight of the Central Government has yet to arrive in Crooked Island. Every department is depending on meagre rations and charitable donations, personal resources, local knowledge and dedicated commitment to duty.

Mr. Bonamy, senior man at Water and Sewerage Corporation is a Crooked Islander. He is committed to resolving not only the issues of the various bodies of water that need to be drained on the island, but also with the provision of potable water which is a pressing issue throughout the entire island. There are questions about the safety of the water for bathing and brushing teeth, not to mention human consumption as was confirmed by the Mackeys of Cabbage Hill.

“The one thing the Defence Force did bring that we could use, is that desalination unit they have – that’s a hell of a machine! It is producing plenty of good fresh water. Fresh water has been a problem on Crooked Island for years, ever since hurricane Irene damaged the r/o systems years ago. It would really be good if they could leave that here and we could rebuild water and sewerage around that, it could solve a lot of problems for this island.”

These are the words of Patrick Ferguson, ace-everything mechanic, self taught intellectual and one of the most genuine Bahamians on the planet, who served as a team member, tour guide, local historian and social anthropologist. His statements were echoed by Mr and Mrs Mackey of Cabbage Hill who expressed the same grave concerns during an impromptu community gathering at what was once the dock at Landrail Point. Concerns, which were somewhat verified when BEC supervisor David Daxon confirmed that over “10,000 gallons of diesel fuel leaked into the ground…”.

The draining of the water is a necessary first step in addressing one of the myriad critical issues that face the residents of Crooked Island. The island also sits in complete darkness. Small generator power lights up solitary outposts, separated by miles of flooded roads that dot the burnt out rolling hillsides at night. They look like little camp fires in the distance against the surrounding black of the most brilliant star-lit skies on planet Earth – such stark contrasts that the mind can lose a sense of reality. An estimated sixty-nine lamp poles snapped like match sticks in the 200mph winds. They line the sides of the road throughout the island, broken off at their stubs and carelessly tossed aside by the force of the wind and waves. There is no inherent danger because the engines that powered the island have been completely written off by Mr Daxon, a Crooked Island native. He, like the other amazingly strong and resolute resident native Crooked Island supervisors, including nurses, school principals, policemen, water and sewerage and even persons who are returning by choice to represent the national companies for which they now work so that they can be personally involved in the rebuilding of their home community. They stand firm, calm and steady in their conviction to do all and more than is necessary to restore their island’s essential services. 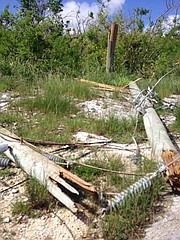 The replacement poles are in fact on island, as is a replacement generator that could go a long way to meeting the island’s temporary requirements:

“We have everything we need, the poles are here, the replacement generator is here, what we need is manpower. And the equipment to erect the poles and we are ready to get the job done.”

These are the words of Mr Daxon. They are words that reflect both the devastation and the state of readiness to rebuild. Even the opportunity for the means and materials to do so would have been well underway long before now, but still three weeks after the most destructive storm in recent, if not in recorded history, Crooked Island remains devastated.

The truth is it has been twice hit – first by the storm and secondly by the neglect and failure of central government to come to its rescue.

First off I want to extend my love and sympathy for my brothers and sisters in the southern islands who are still feeling the effects of Hurricane Joaquin. I feel that this story had much more to do with how lousy the government and most of it's affiliate agencies are than the devastation of the island. It is clear that the past nor present governments, starting from the local level straight up to Parliament square never think long term in their actions. They are more reactive than proactive. No surprise that the men and women of our Defense Force are under equipped as usual and the perfect time for St John the Baptist Church to 'ask for donations.' That church should be busy trying to help the community in which they are situated instead of begging for money to repair a building. What happened to the years and years of tithe and offering money? You should at least have a savings account. For those who would wish to rebut by calling for electrical and building supplies, the people are hungry and need food, water and clothes more than anything else right now. NEMA is a hot mess. How could you send a box and four tires to people who need an emergency vehicle. Better you send nothing at all than more rubbish to add to the trash heap. The local government there sucks just as much as it does in Freeport. It's clear that the possibility of the worst was always possible to happen and they didn't put the measures in place. The drainage and power systems in most of the outer islands have been past needing upgrades as well as most major government facilities like airports and clinics and roads.

I believe that the aftermath of Joaquin has left us with many lessons. Most important, being prepared is the best way to meet any challenge that we are faced with.