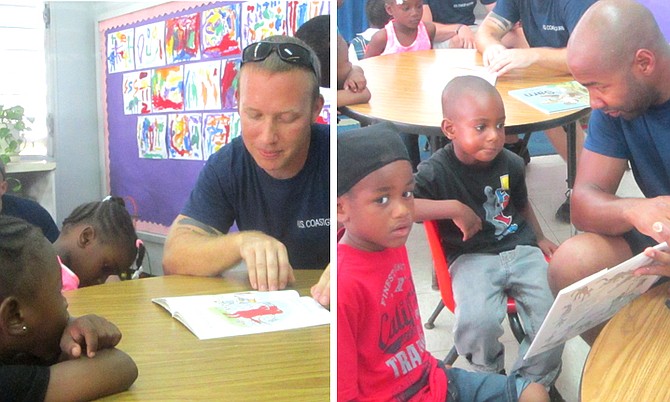 Reading to students at the Bartlett Hill Primary School.

THE crew of the US Coast Guard Cutter Norvell extended a helping hand to the Bartlett Hill Primary School in a school refurbishment project, and also delivered some 3,500 children’s books to promote literacy on Grand Bahama.

The crew painted and provided light landscaping to beautify the grounds at the school in Eight Mile Rock.

Commanding Officer Lt Commander Kirk Fistick and some 20 volunteers from the USCG Cutter also delivered some 500 children’s books to the school where they took time out to read to pre-schoolers.

The group also delivered and donated 3,000 books to the Sir Charles Hayward Library in Freeport.

Principal Gia Walker was very grateful to the crew of the USCGC Norvell for their assistance.

She said this year the school is celebrating 40 years and the building had not been painted in the last seven years.

“We have been very blessed with their presence here today – first in giving the school a facelift, and, second, with their donation of books and reading to the students,” she said.

This is the first time that the USCGC Norvell has visited Grand Bahama. The 154ft Cutter, manned by a crew of 25, is stationed in Miami Beach, and patrols the waters in the Florida Straits and the Bahamas.

“It is our first time on Grand Bahama and we are pleased to have this unique opportunity to help the Bartlett Hill Primary with a painting project,” he said.

Through their relationship with the Brighter Bahamas Foundation, which brings books from the United States to the Bahamas to advocate for literacy, they have delivered 7,000 books to Nassau in the past.

He said: “Since we were coming here we had an opportunity to bring books directly to Grand Bahama and to read them to kids in the school; and we are also going to be donating some books to Sir Charles Hayward Library for its Mobile Library project.”

As a sign of friendship and in keeping with tradition, Lt Commander Fistick presented the ship’s coin to the Minister for Grand Bahama Dr Michael Darville.

“The Bartlett Hill Primary, located in West Grand Bahama, is a school that is aging, and even though we have done tremendous work during our summer school repair programme we were unable to paint the school and this act of generosity by the USCG is greatly supported in the community,” he said. “Also, the reading programme and donation of books is something we definitely endorse. On behalf of the government and residents of Grand Bahama, particularly in West GB, we want to thank you for what you are doing in our community.”

Dr Darville also said that government is very thankful to the USCG for assisting in search and rescue missions in the Bahamas, and patrolling and ensuring the safety of the country’s waters.

This is what our OWN GOV'T should be doing. Yet it's foreigners who actually CARE MORE ABOUT US AS A PEOPLE THAN OUR OWN!!!

Thats why i get annoyed when so much as y'all is act like Foreigners is the Devil.

Bless up to the crew of USCG Cutter; people who care about us, not our votes