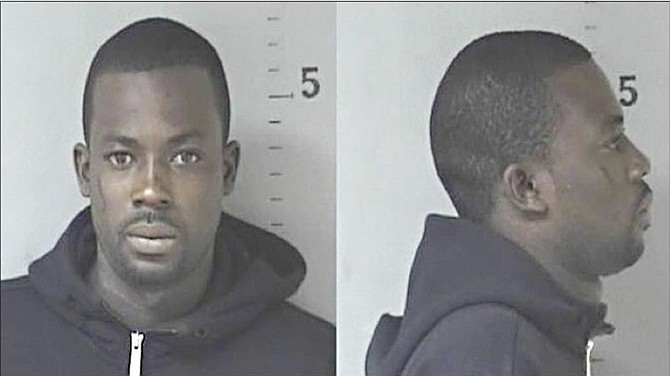 Jeffrey King, who was accused of robbery at the home of Deputy Prime Minister Philip ‘Brave’ Davis.

ONE of three men due to stand trial next month for the robbery of Deputy Prime Minister Philip “Brave” Davis was a no-show for a bail hearing yesterday.

Jeffrey King filed an application before the Supreme Court seeking a variation of present bail conditions imposed by trial judge Justice Vera Watkins last May when she exercised her discretion to release him on a bond ahead of trial, scheduled for May 2.

King was granted bail with two sureties on condition that he report to the Grove police station twice a week before 6pm. He was also required to be electronically monitored and was issued a curfew.

King is seeking to have the electronic ankle bracelet removed. However, he failed to appear yesterday and the matter was further adjourned to April 12.

King, 25, with 25-year-old Tyrone Knowles and 21-year-old Marc McCartney deny involvement in the robbery at Mr Davis’ home in 2013.

They are accused of robbing Mr Davis of jewellery worth $93,000, a jewellery box worth $200, Baraka gold jewellery worth $700, an opal top wallet worth $450, a Royal Bank of Canada credit card and a driver’s license worth $15.

The three are further accused of robbing Mr Davis’ wife, Ann Marie Davis, of $2,953, and Wilberforce Seymour of $10. Mr Davis was acting prime minister at the time of the incident as Prime Minister Perry Christie was out of the country.