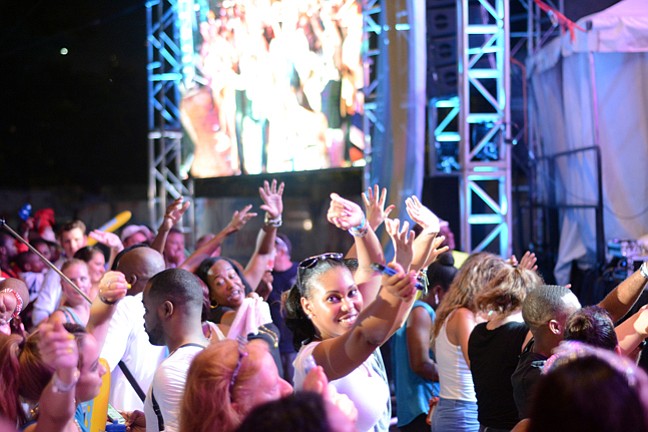 His statement came a day after the BNFC revealed that international artists Destra, Wyclef Jean and Tarrus Riley, among others, have been contracted to perform in the festival.

He said the artists would be paid at their international market rate: about $30,000 for Destra, a Trinidadian soca singer, and about $70,000 for Wyclef Jean, a Haitian-born Grammy-award winning artist.

Early last month, Tourism Minister Obie Wilchcombe told The Tribune the government’s carnival budget would be “around $3 million”; however he did add that “work on the final number is still being done”.

Last year, the government spent $11.3m on the inaugural festival, going over its initial budget of $9m.

At the time the revelation was a surprise, considering last year Mr Major said having international artists is critical to attracting tourists.

The BNFC had been working for “a couple weeks” to secure the international artists, Mr Major said yesterday, adding that negotiations were very delicate.

While the final lineup of entertainers has now been made public, Mr Major denied rumours that last year’s headliner - soca singer Machel Montano - will be back to perform this year.

According to a statement released on Wednesday, “the down home flavours” of Bahamian sounds will be mixed with a Caribbean fusion of soca, reggae and Latin vibes during three nights of non-stop music.

“Events will be bigger this year than last year,” Mr Major said. “It will be more exciting. There will be a tremendous amount of new local material by local artists with international and popular acts that will draw Bahamians and tourists alike to our country.

“We’ve embarked on a strategy that promotes this as a destination event or events, not as one promoting artists. We’re not having a Babyface show or an Al Green show,” he said, referring to two American r&b singers.

“Tourism has been spending money for months now through its inaugural channel to promote Junkanoo Carnival.”

How is it possible that the Dept of Immigration can turn around the two temp work visas for the foreign artists within 10 days?

That man has nothing but hits.

They have to be lying. Wyclef getting a million easy....

Crooked Island has been on fire for TWO WEEKS in three major settlements and not one hose or fire truck to help the people, just buckets of water.

7 million for Carnival (Last year, the government spent $11.3m on the inaugural festival, going over its initial budget of $9m.)

6 million for IDB (What is this being spent on?) The landscaping on Go Slow Bend?

Remember this on Election day.

Yes! REMEMBER THIS, ON ELECTION DAY!

Great reply. So many more important things needed in this country instead of wasting millions on foolishness.

Next week it will be right back to last year's $11 million.

Meanwhile, scores of Bahamians are unemployed and unable to support their families. "Believe in Bahamians", right?! Well there you go! Destra will score $30,000 and Wyclef Jean will receive $70,000...but how much is being paid to local artists??? It's a slap in the face to our own people!

Bunch of jack-rabbits parading in the streets while this country goes to Hell. All in the name of "fun", right? What sweeten your mouth now will sour your tails later! Remember to have FUN when your electric, water, telephone, and Cable bill cannot be paid! Sadly, some persons who have no health or life insurance, massive credit card debts and are in default with bank loans and at risk of losing their homes will be "jumpin' in da line". SAD!

Kanaval 2016 done blown its foreigner entertainment budget that you went for Wyclef Jeanelle Jean, because you couldn’t afford to book the other Haitian performer “Sweet Mickey”/
Comrades let it not be lost that Haitian President Michel Martell “AKA Sweet Mickey” stepped down from office on February 7, 2016, but not before he released his song Bal Bannann Nan (‘Give Them the Banana’)

you spell it just they we butcher it

"Early last month, Tourism Minister Obie Wilchcombe told The Tribune the government’s carnival budget would be “around $3 million”; however he did add that “work on the final number is still being done”.

So now cabinet increases the Budget to $9m to allow all of the "connected" the chance to dip into the Festival cookie jar. Why are Bahamians accepting this sh*t???

Comrade Honestman's how would you explain that despite going millions over budget for 2015 Kanaval's, failing to produce the much promised Paul Major's audited financial statements - Her Majesty's Official Opposition party (HMOOP) have remained muted?
But then again, HMOOP's own memory whether it received moneys from Save the Bays, is equally as muted?

Now that Island Lucky boy is here to line the governments pockets in exchange for a few winks here and smiles there and ear wax when it comes down to critical question, maybe Island Lucky boy should sponsor the 7 Mio for the Carnival as a way to give back to the Bahamian people to have voted in a corrupt government?

If the budget is $7M, the question is, by how many millions will they go over budget this year.

Wow. This means they changed nothing. All they did was dump the carnival bands whom they promised they would support in this new "business venture". Seriously last year they estimated slightly over 1 million in support for the bands so that's all they removed, we're set to spend another 19 million, maybe more because the planning is worse. Double wow.

This so called Carnival event is nothing but a PLP campaign rally paid for by a multi-million dollar increase in the level of our country's unsustainable national debt. Putting the cost of this PLP campaign rally event on the already broken backs of hardworking honest Bahamian taxpayers is an unconscionable act of theft on the part of the corrupt Christie-led PLP government aimed at doing nothing more than buying votes. The funds from the national borrowing for this event would have been much better spent on desperately needed school supplies, food and clothing for the abandoned hungry children of the immoral men and women who prefer hedonism to social responsibility.

The Carnival in the Bahamas is another sign of our D-Level politicians. I think the Bahamian Carnival is the only Carnival on the plant that takes place after Easter. Carnival almost everywhere on the planet (from Peru to Aruba, to Italy to Brazil) is a pre-lent event and rooted in the Catholic Christian faith. So the idea of Carnival in the Bahamas in April, is like Christmas in June (explain that to your kids) and a simple brain fart - totally detached from any cultural or religious base. You may as well introduce Halloween to the man in the moon. Now why in the world no one came up with a concept like the Pirate Festival or something like that, with the history of Pirates being part of the Bahamian DNA, is beyond me. For the slow brains: Its like Mardi Gras in a Pirates Costume. Something like that will draw international crowds. Declare Bahamas the Nation of Pirates again for three days a year. Go nuts, go crazy, create a brand, sell rum, beer, flags, dance, sing, make babies. Woodstock for Pirates and would-be-Pirates.

but don't dare to bring brownies, you may well get arrested and declared a security threat for the country.

Comrade GrassRoot may I suggest baking cupcakes. Best way you and munchies will be unlikely to draw the attention of policeman's on lookout for the more noticeable laced brownies.
Comrade Tal's baking tip day. You might want to try the French chocolate recipe. A properly laced small single cupcake can be as long lasting as its freshness. What's you don't wants to do, is over cupcakes munch, okay?

The Pirate Festival concept is flawed. In order to make the Bahamas a "Nation of Pirates for three days a year," as you suggest, we'd first have to stop it from being a nation of pirates the other 362 days of the year - or 363 days, as this is a leap year.

Well you could market it as the only three days the pirates get to wear their dress uniform. Oh and think of it, remember the rationale behind "carnival" the number of hits the word carnival gets? I bet you "pirate" gets more hits than "carnival".. Or not... but you could just say it to sell it. Lol

"Declare the Bahamas a nation of pirates". Lol, that's deep. I like the idea though, it feels authentic

you know Grassroot, I really think you're on to something. I like it! How many Junkanoo festivals already showcase a pirate theme anyway. Nation of pirates. I love it. Lol

When is Rum Festival? The only thing you'd have to add is the pirate concert. The artists could create all kinds of songs about robbing the treasury.

Tribune sucks if they cant' obtain the summary of what in the budget caused the doubling.

Meet Destra. This year's flag carrier selected by the ministry of tourism. "Sunday's best" everyone.

(each cheek must have got $3mill )

This song by Wylclef is nice. Will be awesome live. Should have a background video for those devastated by the storm and use the moment to ask for text donations. Definitely captures what should be the meaning.