Isaacs And Moree Suggested As Successors To Chief Justice 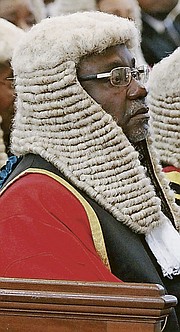 Mr Johnson also called for more objectivity in judicial appointments – particularly with regards to the office of the chief justice, stressing that the selection process should be “fair and free from any political bias.” He also said that the individual selected as chief justice should be one who has “garnered the support and respect of their contemporaries and members of the judiciary and the view of the bar.”

His comments came amid speculation that Attorney General Allyson Maynard-Gibson is being considered to be the next chief justice. Leader of the Official Opposition Dr Hubert Minnis, when contacted yesterday, said he has not been informed of a pending vacancy in the office of the chief justice, and that he had not been made aware of any considerations for the post.

Attempts to reach Mrs Maynard-Gibson were unsuccessful up to press time. However, a well-placed source told The Tribune that Sir Hartman might soon demit his post.

This marks the second time within the last two years that Mrs Maynard-Gibson’s name has emerged in speculation of this nature, the last instance being in 2014 following the resignation of former Chief Justice Sir Michael Barnett.

When contacted for comment yesterday, Mr Johnson said the appointment of chief justice is “something that is not to be taken lightly” and should be devoid of politics.

“I can quite recall what appeared to have been done under the former administration of the FNM, where it would have appeared that persons may have been selected because of their affiliation with the party,” Mr Johnson said. “And I am hoping that that appearance, though it may not have been real, does not reoccur, and that the person that is to be selected, that person would be someone who has demonstrated through their practice in their law and through service as a member of the judiciary, whether in an acting capacity or on a full time capacity, that they have the versatility in dealing with a number of complex matters. And obviously that person garnered the respect of not just the bench but the (Bahamas) Bar.

“Of course, you have to be fearless, independent and impartial, and I’m hoping that this process produces or results in someone who fits that bill. In my opinion, and I cannot speak for the Bar because we haven’t done a poll or anything at the Bar, but based on my opinions and my investigations, there are two very capable individuals who are sons of the soil, they have demonstrated that through their allegiance and loyalty to the country, and they’re in the person of Senior Justice Jon Isaacs, and Mr Brian Moree, QC, who I think are well fitted for the post of chief justice.”

Mr Johnson added: “And so I’m hoping that the prime minister, of course he would give reasonable consideration to it, but also that the leader of the opposition would play his role. And that the process, at the end of the day should appear to be fair and free from any political bias.”

The chief justice, the highest post in the judicial system, is appointed by the governor-general after recommendation by the prime minister.

Sir Michael, a former senator, was appointed in 2009, having served as attorney general and minister of legal affairs from 2008 to 2009 under the former Ingraham administration.

The bar should make the selection. The PM should never have a say in this, and neither should the GG.

The Office of the Attorney General holds the KEY to what any administration can and cannot do .............. this Office should not even be filled by a career politician ....... much less the Office of Chief Justice ....... but both Offices have been manipulated by Prime Ministers in the past to push their selfish political agendas ...... that is why we have ended up with the mess in our Judiciary today ...... FORTY YEARS OF POLITICAL PATRONAGE AND INTERFERENCE.

Sorry but this is what the Constitution says.Nothing else matters.

Looks like we have more changes make to our constitution. I guess when it was written the drafters had no idea we would someday have such a corrupt government and inept Prime Minister (who in turns appoints such an inept Governor General). The drafters assumed that our population would be educated enough to appoint good leaders.

I am surprise that Mr; Johnson did not endorse Fred Smith but Mr: Brian Moree is not much different. . It is plain to see where Mr: Johnson is comming from. but I am gratefull that no one has asked him to endorse any one at all.

BURDIE PLEASE ! CHECK THE BROTHERS IN WOODS ALLEY IF YOU WANT TO CONTRIBUTE !

For the sake of our country and all Bahamians I truly hope Chief Justice Sir Hartman resists all of the considerable pressure being brought to bear on him to demit office solely because Christie wishes to have this honorable and high post in our legal system occupied by one of his puppets (Maynard-Gibson or Isaacs) before the outcome of the next general election. As for Brian Moree forget it - there's no way Christie would have such an independent talented and highly experienced legal mind hold the post of Chief Justice.