Turnquest Asks Why Carnival Report Has Not Been Released 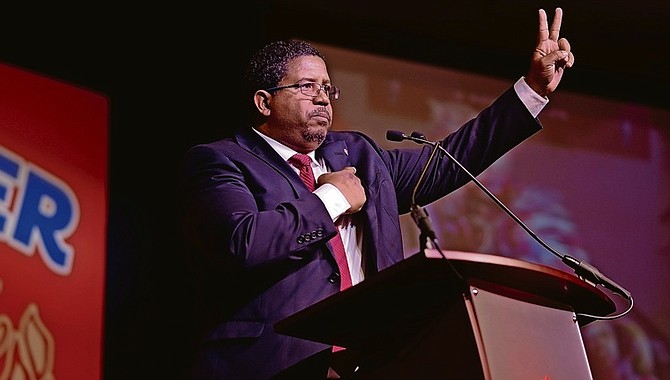 Mr Turnquest, the shadow minister for finance, said the Bahamian people “are due a full and transparent explanation of how that money was spent, and what the returns were on that money.”

Bahamas Junkanoo Carnival was held in Nassau from May 7-9 and in Grand Bahama from April 15-16. However, more than two months after the festival was held, many, including members of the Official Opposition, have questioned why the Government has yet to produce figures on the festival’s financial performance and economic impact.

Last week, Bahamas National Festival Commission (BNFC) Chairman Paul Major said the report is complete, but could not confirm when it would be released publicly.

Tourism Minister Obie Wilchcombe also told The Tribune last week that the report was completed, but that he did not know why the report had not yet been released. At the time, Mr Wilchcombe said the BNFC was meeting with Prime Minister Perry Christie, who is also the Minister of Finance on the report and “then they can release it because his Ministry is responsible for that.”

“As far as I’m concerned the ministry would have very little to do with that report,” Mr Turnquest said yesterday. “The carnival commission would have been the ones who would have had the information to compile the information in the report, it would have gone to the Ministry of Finance for their information, but other than that it ought to be presented.

He added: “…The Bahamian people are due a full and transparent explanation of how that money was spent, and what the returns were on that money.”

In April, Mr Major said the government would spend about $7m to host the festival.

The month before, Mr Wilchcombe told The Tribune the Government’s carnival budget would be “around $3 million”; however, he did add that “work on the final number is still being done.”

The government budgeted $9m for the inaugural Junkanoo Carnival, but due to cost overruns and other failures on the part of the commission, that spending ballooned to $11.3m. Last year, the government reaped $8.3m in combined direct and tax revenues, with the latter providing $6.7m of that sum.

The commission subsequently faced strong criticism for going over budget, lack of proper planning, not enough international marketing and not announcing a headliner for the festival’s concert sooner.

Where's your apology for your carnival Turnquest?

This such an assified response...how does the FNM's fiasco which was paid for with private funds equate to a NATIONAL fiasco paid for with PUBLIC MONEY? No wonder the country will never get better because all we see is red or yellow...STUPID!!!

Quick, make a release half a yr later whilst they're throwing tomatoes.

You'd think given one was held in his town, he'd know at least those results inside out.

Wake your ass up.

Yes, Turnquest. And also, where is the Public Accounts Committee's majority report on Urban Renewal? You sit on that Committee and your side controls it. The Parliament is about to be dissolved soon and that report has yet to be tabled for the Bahamian people. The ineptitude of both sides of Parliament is a foreboding sign of what is to come. We know what the PLP is. The problem is that the FNM this term has failed to demonstrate in actions, not mere words, that it is better for the job.

"All talk and no action" is the FNM party slogan.

Turnquest never targets an individual, he all was speaks in vague terms. That way he never has to face anyone down. It also means that no one has to respond to his comments.

Be a man and call someone out on Carnival

Right, and the PAC which he sits on could investigate this matter as with all public finances. But they are too busy holding clown fests to focus for any length of time on the people's business. And Turnquest has been notorious for poor attendance at PAC meetings. All of these things demonstrate what kind of alternative they would be to the PLP if elected.

Did Hubert Ingraham's statement about Perry Christie as prime minister, t say that he would rather endorse Perry Christie for another term rather than support Hubert Minnis bybdam