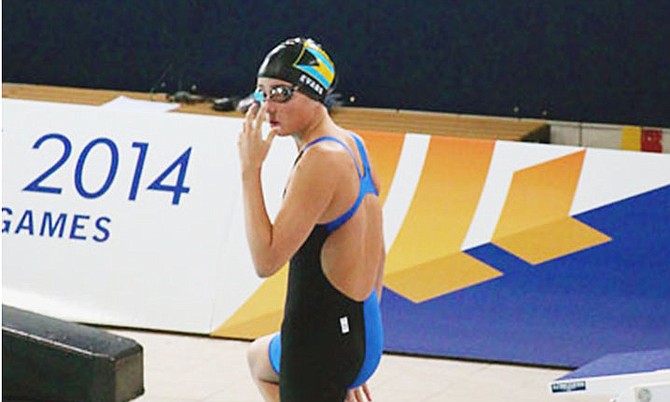 RIO de Janeiro, Brazil: A national record-breaking performance got Joanna Evans' Olympic debut off to a flying start in the first of her three events at the 2016 Olympic Games on Sunday.

Evans, the second Bahamian to compete in the swimming competition at the National Aquatics Complex, shattered her own women's 400m freestyle national record of four minutes and 12.14 seconds when she touched the wall second in the first of four heats in a blistering time of 4:07.52 as she was beaten by Igarashi Chihira of Japan, in a close finish.

However, neither will make it back for the final on Sunday night, which contained the eight fastest qualifiers.

But 18-year-old Evans will leap up the world rankings from 40th to 13th as she posted the best time ever by a Central American and Caribbean swimmer.

"For my first Olympic swim, I'm very, very pleased. It's a good chunk off my best time," Evans told the Bahamian media. "Rather, I would have liked to push that girl and win the heat, but that's part of it."

"I felt it," said Evans about her opponent trailing her in the race. "I was like umph. I can't let her catch me. But it was all a part of it. I believed we pushed each other. So it was a good swim, if you ask me."

The University of Texas freshman said she did not anticipate swimming as fast as she did, but not having swum a good 400m free in a while, she knew that the training she put in to get ready for Rio would equate to some fast times.

She will be back for her second swim on Monday when she competes in the 200m freestyle. It's an event she has entered for the fun of it. But after almost posting a personal best in the 200m during the first half of her 400m race, Evans said anything is possible. She is entered in lane two in the second of six heats with a lifetime best of 2min 01.62 sec.

Once she is done, she will take some much needed rest and prepare for her 800m final swim on Thursday.