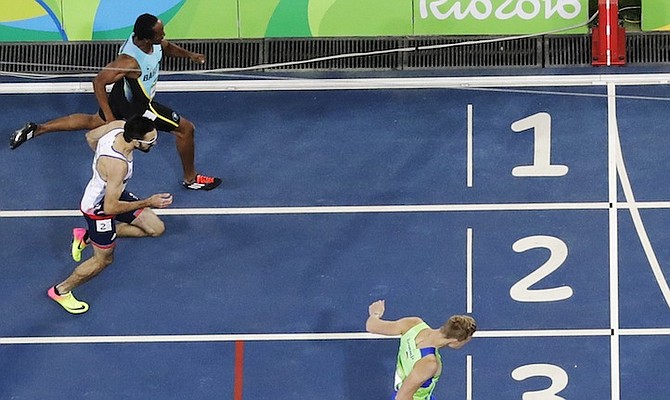 12.00AM: The full story of Friday's action is now online HERE. Just to clarify, Steven Gardiner is into the 400m semifinals. Chris Brown ran a season's best but was just short of advancing. Arianna Vanderpool-Wallace bows out in the 50m free and Ty'Nia Gaither came in fifth in the fourth of eight 100m heats in 11.56 for 39th overall.

10.45pm: Arianna's time is not enough to earn a place in the final. She finishes 9th overall - missing the final by .07.

10.40pm: Arianna Vanderpool-Wallace finishes fourth in her semifinal with 24.60 - we'll have to wait to see if that's a qualifying time for the final.

10.00pm: Arianna Vanderpool-Wallace is up shortly in the women's 50m freestyle semifinals.

9.00pm: THIS HAS BEEN CORRECTED - CHRIS BROWN HAS NOT QUALIFIED - Chris Brown's time of 45.56 means he joins Steven Gardiner in qualifying – a fantastic showing from the Bahamians.

8.55pm: A fantastic run from Steven Gardiner who comes in second and qualifies with 45.24.

8.50pm: Steven Gardiner to run now in the final heat. He's in lane one.

8.28pm: Chris Brown is next up for the Bahamas - running in Heat four, lane one.

8.25pm: Fifth place for Alonzo Russell - who at one point seemed to be storming to the front, before slipping back in the final straight for a time of 46.23.

8.20pm: Heat three is up now - The Bahamas' Alonzo Russell gets the nation's track campaign going from lane four.

And here she is talking to Brent Stubbs about the final:

12.50pm: Arianna Vanderpool-Wallace has qualified for Friday's 50m free semifinals! She finished fourth in Heat 12 with a time of 24.77 – the 13th fastest time. Denmark's Pernille Blume won the heat in 24.23. Australia's Bronte Campbell was second in 24.45 and Sarah Sjostrom of Sweden was third in 24.66.

Shortly after 12pm, Arianna Vanderpool-Wallace will compete in the Women's 50m, heat 12, lane three. You can read a preview of the race HERE.

Then at 8:05pm ET, Steven Gardiner, Chris Brown and Alonzo Russell take part in the men's 400m preliminaries as the track competition gets underway. You can read a preview of that event HERE.