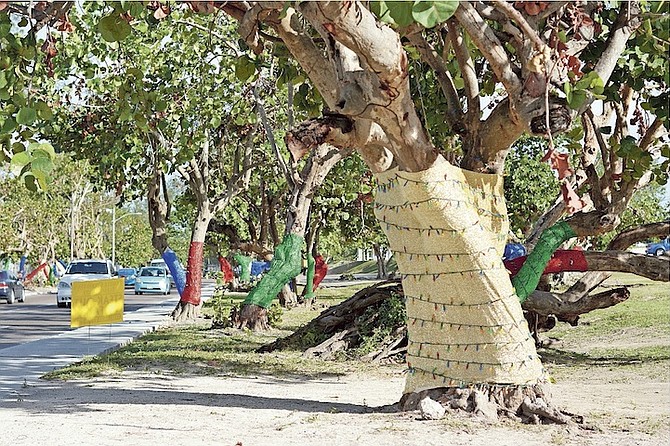 Some of the Christmas decorations up near Arawak Cay. Photo: Aaron Davis 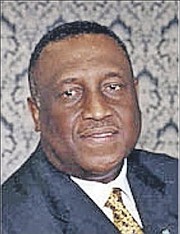 FORMER Minister of Youth, Sports and Culture Neville Wisdom again declined to say yesterday how much a government contract given to one of his businesses, Florarama, to decorate West Bay Street and the downtown Nassau area is worth, as criticism over the decorations grows.

Mr Wisdom, who served in the first Christie administration, said his contract is with the government and it would inappropriate for him to get ahead of the Ministry of Tourism by disclosing the worth of the contract without its permission.

When questioned yesterday, Tourism Minister Obie Wilchcombe also did not reveal the worth of the contract. However, he told The Tribune that there were three bids for the work and that Mr Wisdom’s company put in the lowest.

He added that Florarama is run by Mr Wisdom’s wife, who Mr Wilchcombe said, was one of the most qualified and distinguished designers in the country.

“Florarama provided the lowest of the three bids,” Mr Wilchcombe said. “The company is renowned for its professional excellence. Over the next several days we expect the beauty of the decorations to light up the Christmas season. Junkanooers and other vendors are involved in the experience that is being created. Already Bahamians are taking pictures and enjoying the season.”

The Tribune reported Wednesday that Florarama has been given a contract to decorate downtown Nassau and Arawak Cay as the ministry prepared to launch a series of holiday themed events to attract Bahamians and tourists to the area.

The decorations, though incomplete, have been criticised by some Bahamians, with numerous pictures of them mocked in posts on social media.

What some perceive to be poor quality work has caused them to question how much money Florarama has received from the Ministry of Tourism for that work.

For his part, Mr Wisdom has stressed that the work is not yet finished.

The decorations at the Arawak Cay area, for instance, will be completed after the conclusion of a gospel festival, Fam Fest.

Fam Fest will be held between today and Sunday.

As for questions about his receipt of the contract, Mr Wisdom said his family has been in the decorating business for 43 years and he deserves to make a living from it now that he is out of office.

Though he refused to disclose details of his contract, he insisted it is not worth much.

It is fewer than what previous decorators have been awarded because so much of the work has been done in the Bahamas by Bahamians, he contended, despite the fact that the scope of the decorations this year exceeds that of previous years.

“It’s entirely Bahamian,” Mr Wisdom said. “Eleven groups of people have been hired to work, along with Bahamian artisans. We’ve been in this business for 43 years. My wife is a world-class designer.”

Mr Wisdom said criticism and press attention to the matter is an attack because of his identity.

Mr Wisdom said his company received a down payment when initially contracted and will receive the rest of its money when its work is completed.

I guess he must be using the term "world class designer" very loosely, in all of my years in the Bahamas I have never seen such a horrible job of decorating. Bahamians take pride in their craftsmanship, and honestly this is an embarrassment to the entire Bahamian population. What a hack job.

Well, at least there is no Madge Simpson hairstyled tree in Parliament Square. That brought a new low to the word UGLY!

It's a slap in the face to almost everything human/manmade.

Since the history of Christmas decorations this goes down as the WORST effort I have ever seen paid or unpaid.

How is it possible for the Bahamas government to mess up Christmas?! That is a gimme. Easy points! No man...

The Bahamas government managed to mess up Christmas...

Comrades it's hard tell the difference from Wisdom's Christmas decorations and the left uncollected garbage that greets our tourists.Maybe, it's taxpayers garbage wrap?

These days everybody bastardizing our Junkanoo name. Right now these a bunch of children who pasting for junior Junkanoo, and we know how that is look.

What gets me is someone approved this "unfinished" mess to remain in that state for more than 2 minutes. Do you know how many tourists have come and gone and wondered, what the hell is that??!!

Yes Mr Wisdom, these comments are being made to "get to you", simply to let you know the decorations are awful, please take them down.

Crooked, cookie-jar diving PLP cons will have no shame when it comes to fleecing the Treasury ............ do we expect a different response????????

Comrades! You think this $26 MILLION KANAVALS loving government would be careful not to invoke Junkanooeers into any conversation to do with how they spends taxpayers moneys. It is much too descriptive to not make the natives laugh. You think the amount of this Christmas Tree Wraps contract letting is as secretive the PLP cabinet keeps the VAT dollars collected from taxpayers.

Comrades ThisIsOurs, who but a well-connected PLP, could've thought to come up with the creative ingenuity not only turn your Granny's old crocus sacks into artworks... but say taxpayers, screw you cause we gonna gets you pay for Christmas wrapping trees in them?
Now you just watch how the current shortage crocus sacks will push up price the raw material to sew panties for your Granny's panties.

LOLOLOLOL!!!!! Oh my my my! This is toooo funny

No wonder many Bahamians can't advance beyond their dependence on government when their political associates themselves depend on government handouts?

We need to stamp out government nepotism and stop falling for political parties that promise us jobs, but not entrepreneurship. When we have a culture of ownership facilitated by similar incentives offered to "Foreign Investors", we'll be less likely to tolerate folks who suck the breast of government dry!

@ThisIsOurs, Thank you so much for the laughter. I don't think I have laughed so much for the year as I did at the photo you posted. LOLOL! So you don't feel that the captioned photo depicts Junkanoo art huh? Well they say beauty is in the eye of the beholder.

Are these tree condoms for World AIDS day?

Every day this government and its cronies do something to show how much contempt they have for the Bahamian people, and then they dare the Bahamian people to have anything negative to say about it because to disagree with the PLP is of course "un-Bahamian". What I want to say beyond that would only result in the comment being deleted so I won't bother.

I do not care who did the decorations, I do care that they are childish and an embarrassment to the Bahamas! If this is the best we can do we are in deep trouble.

Ride the western strip today and this is the worst Christmas decoration I've ever seen.

See folks, the PLP sticks together in their criminal plans. This crack pipe of a man thinks we are out to get him, thousands of Bahamians agree that this X-mas decoration looks like a mess, but he claims we're out to get him; typical PLP mentality, I call it a guilty conscience. I can't even image how much this bull$hit has cost us and what they've pocket it from it, but one thing I'm sure of is that they will never let us know how much it has cost us. PLP mathematics never adds up, $13 million dollars spent a Junkanoo Trinidad Carnival that looked like only $500,000 dollars was really spent on it and only 30,000 people showed up. Meanwhile the Rolling Stones spent less than a million to play in Cuba not to long ago and 1.5 million people showed up. For every million dollar used by the PLP, 90% goes into their deep pockets, the evidence is all around us, everything is in decay from our roads to the schools; where the hell is our money?!