Bpl Confirm They Will Fix Damage To Clifton Pier Plant 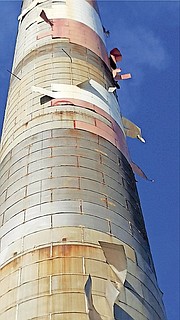 Damage to a stack at BPL’s Clifton Pier plant, which has not been repaired since Hurricane Matthew.

OFFICIALS from Bahamas Power and Light have confirmed plans to repair the external structure of the damaged smoke stacks at the company’s Clifton Pier plant.

In an interview with The Tribune last week, Mr Maynard said the conditions at the plant were a danger to his members stationed at the western New Providence site.

He claimed the covering was peeling and falling to the ground, adding that at any moment, one of the metal plates could “hit one of the workers”.

Mr Maynard said the issue was brought to the attention of the executive director of BPL’s board, Deepak Bhatnagar, but he claimed Mr Bhatnagar refused to sign off on the repairs to be done “in order to save a dollar”.

He said if the issue was not resolved by this week, his workers would not return to the Clifton Pier plant

However, on Sunday, BPL’s Corporate Communications Manager Arnette Ingraham confirmed that a deal has been signed to carry out the repairs soon.

“A contract has been signed to replace the cladding on the smoke stacks at Clifton Pier. Work is scheduled to begin next week,” Mrs Ingraham said in response to an inquiry made by The Tribune.

“The external cladding was damaged by (Hurricane Matthew). The cladding does not impact the functioning of the smoke stacks.

“The cladding that remained wasn’t in imminent danger of falling off the stacks.

“Discussions were under way long before the union president’s comments to repair the stacks.

“As with anything, we can’t rush to sign a contract without ensuring that we select the best team for the job, secured at a reasonable price.”

At that time, the old BEC board was dismantled and Mr Bhatnagar was named executive director of the new BPL board.