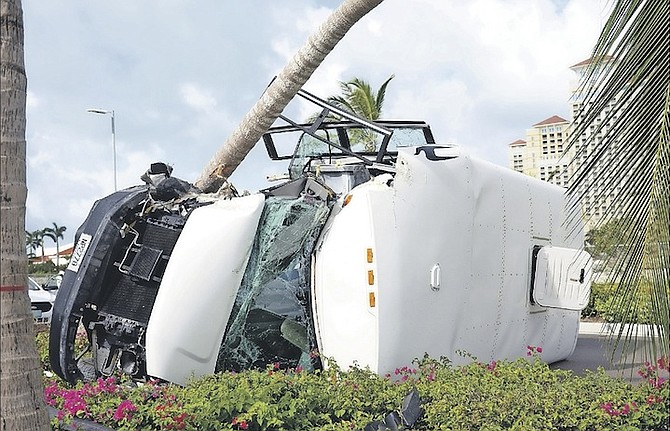 The wreckage of a bus carrying 24 students from St John’s College and a teacher. The bus overturned, hitting a tree on West Bay Street near Baha Mar. Photo: Shawn Hanna/Tribune Staff

The scene outside Baha Mar as a school bus carrying St John’s students and driven by a teacher overturned. Photos: Shawn Hanna/Tribune Staff

A GROUP of high school students from St John’s College was taken to hospital yesterday when the teacher taking two dozen of them on a field trip lost control of the vehicle and crashed into a coconut tree.

Police believe crashing into the tree played a role in saving the passengers’ lives, as it stopped the bus from careening into oncoming traffic.

The bus veered into the median strip at Baha Mar Boulevard yesterday morning, hitting the coconut tree and sustaining significant damage, and was turned on its side.

The driver of the bus was the school’s geography teacher.

Superintendent Craig Stubbs, head of the police traffic division, said he does not believe speed played a role in the crash.

“Initial reports say to us that the bus driver said he was experiencing some medical condition and as a result he made an attempt to head back towards the school, but they did not make it that far,” he said.

“Speed is not a factor from what we see but based on the damage to the bus, prior to the collision there might have been some acceleration before the bus collided with the tree.”

Summing up the events, he said: “Shortly after nine this morning we received a report of the school bus with school kids turned on the side with a tree resting on it. Police from the western division responded to the scene where we met a group of St John’s students. They were on the sidewalk laying off.

“We want to say thank you to those motorists who stopped, those who were trained in the medical field who stopped to render assistance to those students. It speaks volumes. This is the festive season and we are appreciative of what was done to assist those students this morning.”

Passengers on the bus escaped through a hatch at the back of the bus. Students were assisted by motorists in opening the hatch.

As news of the accident spread, many parents showed up to the cordoned off area to look for their children.

Lindsay Thompson explained the horror of getting the call that her 17-year-old son was hurt in the crash.

“One of a parent’s worst nightmares is a phone call about an accident or some situation involving your child or children during school hours,” she posted to Facebook.

“I experienced that today. My son William and his classmates of St John’s College were involved in a very traumatic accident today near Baha Mar. You get the call and although parent worry kicks in… nothing prepares you for an accident scene, especially the one today. To see the bus on its side, nestled in a tree is horrifying to say the least. I asked for my son and then I see him and other students on their backs on the grassy area being attended by EMS personnel.

“He was outfitted with a head brace and placed on the stretcher and along with several other students, was placed in ambulances at the scene.”

Ms Thompson thanked the staff at Doctors Hospital for their care of the students.

Supt Stubbs said the scene never became chaotic, but he warned against the rush to upload video clips and pictures of such incidents to social media before authorities can reach out to those that may be concerned. The fast-paced social media impact, he said, risks inducing undue stress.

Ultimately, he said the coconut tree in the middle of the median strip may have played the critical role in saving people’s lives.

In a statement, Doctors Hospital said it was honoured to treat the students.

“It is fortunate that our resources were able to meet the demands of this incident as well as allow us to continue care to our other customers with minimal disruption,” said Chief Executive Officer Charles Sealy.

The statement from the hospital said two ambulances were dispatched to the crash scene.

The first of 23 patients began arriving at the emergency room shortly after 11am and by 3pm, all but four who had to be admitted had been treated and discharged, the hospital said.

The injuries sustained were neither life nor limb threatening. The four admissions were mainly for observations, the hospital added.

our public service drivers are the worst period - like they all learnt to drive in some lawless state.... oh wait Nassau.

How on earth???? This is impossible for any driver navigating the roundabout at a sensible speed.

At least 1000 fender benders happen in Nassau daily ....... with NO legal consequences ..... we have bred a lawless, callous, anti-social citizenry thanks to our broken homes, D-grade education and wutless civic leaders

A tourist while taking pictures of Baha Mar last year October died in the same vicinity as his family watched in horror. A MP garbage truck rolled over him but nothing came of it. Bad omen somewhere there...we need the historians to do some research...

All them kids look like they DNA ? Green T shirt and all.

Pray that the kids are doing well and escape this incident without serious damage. This is no time to be running on with the road traffic issues and political rubbish.

Before you all jump to the wrong, nasty and negative conclusions, wait for the facts to be told, for heaven sake.

The driver had a medical issue. It happens unfortunately but in this case, no one was critically injured, and the driver is alive to give the facts!

Obviously all but one of the posters above did not red the article, or in the least they did not comprehend. the article clearly states that it was a teacher who was driving the bus, not a public service driver. The article also said that the teacher/driver experienced a medical condition before the accident, and while speed was not a factor, the bus may have accelerated before the crash.

Don't think that info was there when they made their comments