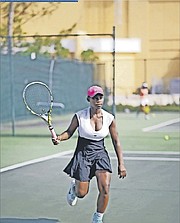 SYDNEY CLARKE in action in this file photo.

SYDNEY Clarke emerged as the winner of pool B of the ladies’ division and all four Davis Cup players booked their spots in the men’s semi-final of the Bahamas Lawn Tennis Association’s annual Giorgio Baldacci National Open Challenge at the National Tennis Centre yesterday.

Completing the ladies’ round robin segment of the weeklong tournament, Clarke pulled off a 6-1, 6-3 victory over Elana Mackey. With the win, Clarke finished undefeated at 3-0, while Mackey dropped to 2-1.

The two will advance to the semi-final that will be played today against defending champion Iesha Shepherd and Sierra Donaldson, the top two finishers out of pool A.

Starting at 2pm, Shepherd will face Mackey on court two and Clarke will meet Donaldson on court four to earn the rights to play for the final on Friday.

Then at 3pm, the semi-final in the men’s division will take place. On court one, defending champion Baker Newman will face Kevin Major Jr and on court three, Spencer Newman will square off against player/captain Marvin Rolle.

The quartet clinched their berths in the playoffs yesterday.

Baker Newman, the top seed, got a bye in the first round of the playoffs and went on to win 7-5, 6-1 over Jody Turnquest. In his first match, Turnquest came from behind to eliminate William ‘JJ’ Fountain 3-6, 6-3, 6-0.

Marvin Rolle, the No.4 seed, secured a walkover win over Justin Lunn to reach the semis. Rolle won 6-3, 6-4 over collegian Joshua Turnquest in his first match, while Lunn blanked Trenton Smith 6-0, 6-0.

And in the final segment of the bracket, No.2 seed Spencer Newman was a 6-0, 6-1 winner over Ceron Rolle. Newman got a bye and Rolle was a walkover winner against Dylan Walker.

The games came after a two-day round robin segment of the tournament where the players in both the men and ladies divisions were placed in pools and the top two in each advanced to the single elimination playoffs.

The Open Challenge will culminate on Friday with the ladies’ final at 11 am and the men’s final at 4 pm followed by the trophy and special awards reception for participants and the 2016 Davis Cup Team.

Following the tournament, the BLTA will name its team for the American Zone II Davis Cup tie against Venezuela in February and the Fed Cup ladies that will be played in Uruguay in July.

Brothers Baker and Spencer Newman, Kevin Major Jr and Marvin Rolle pulled the Bahamas out of America Zone II this year in Bolivia.

And while Shepherd and Donaldson are returning Fed Cup players, both Clarke and Mackey are hoping to make the team for the first time.

• Here’s a look at the results of the matches played on Wednesday as the BLTA continued its Giorgio Baldacci National Open Challenge at the National Tennis Center: