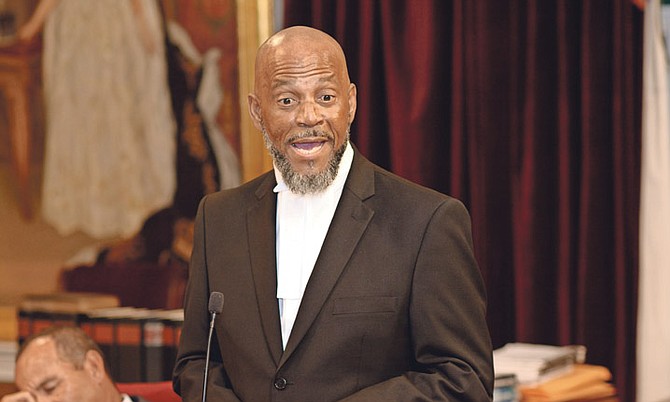 THE leading women in the Senate took newly appointed Senator Rodney Moncur to task during his first contribution to debate yesterday, with one accusing him of setting a “dangerous precedent” in the upper chamber.

Both Senate President Sharon Wilson and Leader of Government Business Allyson Maynard-Gibson, who is also attorney general, admonished Mr Moncur on breaches of conduct and failure to substantiate his claims.

Mrs Wilson warned Mr Moncur on one occasion that his statements were “severely” against the rules of conduct, bordered on scandalous and were offensive to another member.

For his part, Mr Moncur apologised for his errors and underscored that he did not have much time to prepare for the new post or the current debate as his appointment took place less than 48 hours prior. He said he only received the bills that were being debated on Tuesday morning.

Standing to her feet on a point of order, Mrs Maynard-Gibson said: “I do hope that the honourable member will refrain from making wild and untrue statements, and under the guise that he is a new member and that he doesn’t understand.

“This is a very dangerous precedent that has been set in here. Members are expected to be responsible, they are expected to come to this place and debate and telling the Bahamian people about the content of these bills and how they affect their lives.”

Mr Moncur began his contribution with an admission to Mrs Wilson and Mrs Maynard-Gibson that he would need a lot of mentoring in his new post.

He implored colleagues to be kind and assist him because he had not yet read the rules that govern the conduct of representatives in the upper chamber.

Mr Moncur went on to clash several times with Mrs Maynard-Gibson, who routinely stood to her feet to challenge the new senator to substantiate his claims.

On two separate occasions, his comments were withdrawn and expunged from the record. He frequently punctuated his contribution with “God save the queen.”

Speaking to the finance legislation, Mr Moncur ultimately told the Senate that the legislation was “a wicked piece a bill,” that he would still vote for. However he urged Mrs Maynard-Gibson to be slow in implementing the financial legislation, speculating that that United States President-elect Donald Trump, who he called “his man,” would not approve of it.

“I’m not going stand in here and allow this place to be turned into a circus,” Mrs Maynard-Gibson said.

“I’m equally not going to allow the honourable member to impugn the extraordinary good work of the entire team in Parliament. If the honourable member was interested in obtaining these bills, as a senator or any other capacity, citizens in the Bahamas may go to the House of Assembly and obtain any bill that has been tabled. These bills have been in front of the House of Assembly for months, they have been on the website of the Office of the Attorney General for months.

“Now, we do not expect for any of us to suffer because the leader of the opposition in Parliament decided to wait until the 9th hour to appoint her senators that is nothing to do with us, or the citizens of this country. We are here to debate these bills, and we do not expect to waste time.”

Turning his attention to National Health Insurance, the controversial senator endorsed the government’s proposed scheme with an anecdotal story of a 25-year-old man that was unable to afford a MRI scan sometime during the previous term under the then-FNM government.

Mr Moncur was a member of the Democratic National Alliance at the time, and yesterday told parliamentarians that he felt the FNM government was wicked for not rendering assistance.

He lauded Golden Gates MP Shane Gibson, whom he claimed had acted immediately to help the young man, as his favourite minister in the PLP-led government.

As he advocated for the full passage of NHI before the country celebrates the 50th anniversary of Majority Rule, Mr Moncur also took the government to task over medication shortages at the Princess Margaret Hospital.

“These bills are very important, the amendments, why are you dragging your foot? It is a revolutionary piece of bills. …Let’s have it before we celebrate the 50th because the majority, which is my people, the Negro people, will need it.”

This ass - as if he didn't have a big enough mouth! Ya'll too stupid to allow this travesty to take place!

I don't think there is anything to say about this poor excuse for a human being.

This is jut a travesty to our maturity as a budding nation. . .clearly Mr. Moncur is unsuited for this position. . .the man is acting like a clown! And why is he dressed like a lawyer. . .someone should have told him that his neck ware is designed for the bar. . .not the Senate!

Just look at what Butler-Turner has chosen to add to her political resume; the further erosion of the Bahamian legislature.

Well...what did people expect, a miracle?

Senator Moncur...please resign if you aren't able to 'catch up' with what's going on in a manner that would allow you to add value to the Senate. In good conscience, don't take on a post as honorable as Senator if you are not prepared to do your research. While I do not align with any party; I agree that we cannot continue to allow our government to turn any further into a "circus". Just tell LBT you want to help...but Senator may not be for you. My 5 cents.

Now can we please address how we're going to grow this economy and get out of the Junk status?!?!?!?

No No it's all good he's sure to fuck with mayonaise and take her to task even though he is a complete idiot i appareciate the agony he's putting her through. These are PLP backed bills they don't mean shit anyways

Comrades admit it, before Rodney's elevation up to the red senate chamber, had any of you ever before heard of a senator staying up wee hours morning studying a bill to come before the senate?
Before Rodney done bucking "head"-winds with Sharon and Allyson, they will be seeking appointments on regular basis with someone's who has sworn to the Hippocratic Oath, on the professional treatment upstairs matters.
I hope the two ladies, they soon get's issued with their BahamaCARE Health Benefits coverage cards.
How sweet it is that pretty soon you will need make advance reservations to be guaranteed a seat watch Rodney, Sharon and Allyson in senatorial action.

Firstly before we rant and rave, what exactly is it that was said by the Senator that was setting a dangerous precedence? What statements did he make that were bordering on breaches of conduct and failure to substantiate his claims? What statements were “severely” against the rules of conduct, bordered on scandalous and were offensive to another member? . It is rather unfair to accuse the senator of such acts while not providing the evidence to substantiate such claims in the article. I see members of parliament do such things all the time and nothing is said to them. I would like the reporter to say what was said so i can judge for myself.

He did say some weird stuff but I actually thought he had a point when he said he didn't have enough time to read the bill, that was a valid point...but THEN he said "ok, if you say it's for the good of the country I guess I'll have to vote for it".......what???? Will he spend his short lived career voting for things other people tell him to? Loretta Butler torpedoed herself good.

A loose cannon with no intellect and an unenlightened world view. He fits right in. He is the kind of man that Loretta BlubberButt Turnover likes.

Absolute Lunatic, who in a matter of only a few days has ensured that no one will ever take LBT seriously again, ever, how can you, if this is the sort Cretin she admires and respects! Nonethelss, she is the one who needs to resign more than he, as at end of the day, she is the one responsible for this travesty, he is merely being who he is as he continues to duck "Sandilands".

I am still flabbergasted that LBT actually thinks it was a good idea to put a jacka**in the SENATE. Jesus. What was she thinking??? This is beyond embarrassing!!

LBT has totally exonerated Hubert Minnis and the FNM voting delegates. I could fully understand why they choose Hubert Minnis over her. Hubert Minnis has done nothing for me to judge whether he would make a good leader or a bad one. With this one appointment LBT has spoken to me and the nation loud and clear.

I don't think this is what that's referring to (side eyes). I think that's referring to situations where you see AMAZING results that you can't explain by looking at the source. Like I bet Samson was skinny, and everyone was trying to figure out how this skinny man could be so strong. THAT would have been confounding. Now when the results are absolute crap (side eyes again), God een gat nutting to do with dat.

Moncur is out of his element.

Well, did anyone expect any different from Rodney? I've supported LBT though a lot of ups and downs, but I'm doubting this whole fiasco now. That said, I won't vote for Minnis or Perry, so there's not a hell of a lot else to vote for unless a miracle happens -- and I'm not holding my breath. SMT.

Well you know both these women (Sharon Wilson and Allison Maynard-Gibson) had it in for Moncur because he wasn't too kind to them on his radio talk show. So not only did they come to the Senate with long knives for Moncur, but the knives were well sharpened. Moncur should not have exposed himself as he did and made to appear an idiot or someone undeserving of the senate post. He should have assumed an 'observer' status in the first few meetings or, at least, not tread on sacred ground so soon. But as time goes by Moncur will prove his worthiness of the appointment and make significant contributions. He will be the voice of the small man and ensure that the government remains aware of the hardship, pain and suffering that is going on in this country.

You are truly delusional!

No he won't. . .it has always been about Rodney. . .he had a national show where he could have effected for the poor. . .BUT IT WAS ALL ABOUT RODNEY AND HOW OTHERS DID NOT DO HIM RIGHT AR DON'T LIKE HIM!!

I listened to Mr. Moncur's last show. . .his mind seemed going around in a circle. . .he is lost. . .he may not survive this one. . .he is like the dog who chases behind the car each morning and evening. . .now the car stops right in front of his face. . .he keeps walking around the car not knowing if to eat the car or pee on it! So he continues to bark at the stopped car. . .Lol!!