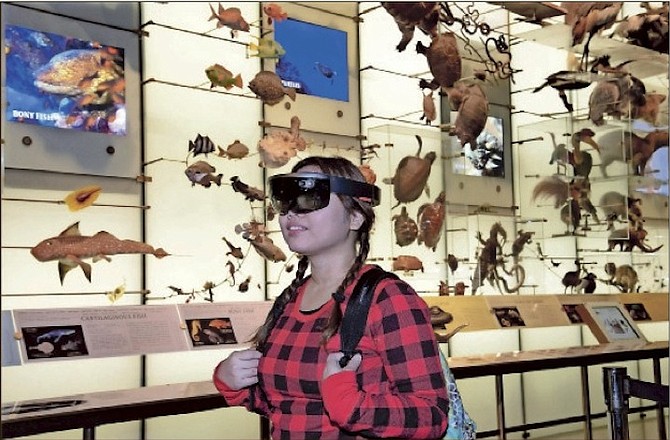 A visitor at the American Museum of Natural History in New York experiences ‘AR Shark,’ a prototype augmented reality program that overlays CT scan data on a Mako shark model in the Hall of Biodiversity. (AP)

Museums are always looking for ways to make their exhibitions more exciting. Now, new technologies are making that easier.

“Where we used to have one way of visiting and experiencing a museum, people now expect a variety of ways,” said Catherine Devine, chief digital officer at the American Museum of Natural History in New York City. “It’s about exploring technologies.”

A look at some of the ways museums are integrating and developing technologies to engage their audiences:

You can get lost in the giant American Museum of Natural History. Explorer, a new app, uses hundreds of Bluetooth hotspots to navigate visitors around its halls to artifacts that may interest them the most.

“Instead of saying ‘turn at West 14th Street,’ it says ‘turn left at the huge mosquito, go through the green sign,’” said Devine. “From the app’s point of view, you don’t have to say where you are. Whenever you raise your phone, the thing you’re immediately in front of is at the top of the app.”

Devine said the app can also can customize visitors’ tours. If a person selects “Really Big,” for example, the app might take them to the museum’s mammoth blue whale. Once there, layers of information are added, including animation, videos and fun facts like comparing the whale’s weight to 1.6 million slices of pizza.

Museums are still exploring the many and varied applications of 3-D printing and 3-D scanning for their programing, research and gallery experience. Some are already using the latest 3-D printing technology to make replicas of historical artifacts to give visitors a new way to interact with the object without damaging the original.

An example of that is an exhibition traveling around the country called “Mummies: New Secrets From the Tombs” organised by Chicago’s Field Museum.

It used a medical CT scanner to “unwrap” the mummies. Museum-goers can peek under the wrappings by manipulating large table-top computer scans placed alongside the delicate specimens to see their clothes, hairstyles and the jewelry they took to their graves.

“The real power of 3-D scanning is that you have so many different potential outcomes,” said Adam Metallo, who, with Vincent Rossi, leads the 3D digitisation team at the Smithsonian’s 19 museums and nine research centers.

You can make an exact replica of something for display or create a digital model for a touchscreen interactive that people can view outside the museum.

“We’re interested in leveraging the technology to kind of take down the walls and provide unprecedented access,” said Rossi.

Virtual reality, which utilises special head gear to create the effects, can transport visitors to places they could never reach, like inside the human body or the bottom of the sea.

At the Franklin Institute in Philadelphia, visitors can explore a space shuttle and walk through the nuclear disaster site in Chernobyl with a virtual reality headset.

At a recent special event at the American Museum of Natural History, young visitors tested out virtual reality goggles that “shrank” them to the size of a beetle for a close-up view of the weevil’s anatomy.

Virtual reality also extends museums’ reach beyond their walls: With just a smartphone and a Google Cardboard low-tech headset viewer, students can go on a virtual museum field trip from anywhere in the world.

“Telepresence robots” — screens mounted on two long poles on wheels — use videoconferencing technology similar to Skype to connect visitors to expert information not quite available from a tour guide.

The American Museum of Natural History tried it out recently at a special event inside its Northwest Coast Indians Hall to beam an indigenous member of the remote Haida Gwaii community into the museum to talk with visitors.

And in the not-so-distant future, museum patrons will be able to ask questions to their smartphones about what to see and do during their visit.