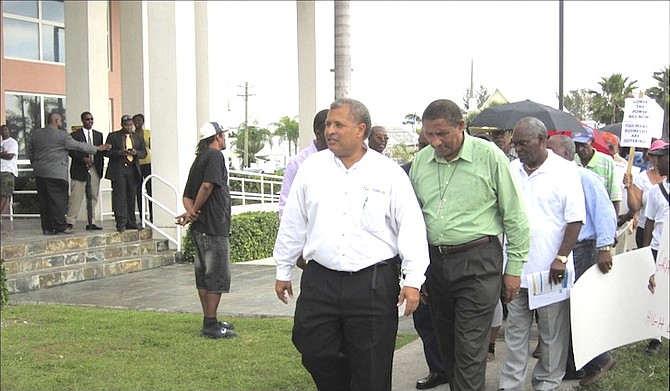 The approval was announced late Monday in a statement issued by the GBPA, which is the regulator of utilities in Freeport. The new rate structure will take effect on February 1.

The GBPA said that after having the consultation period extended from December 1, 2015 to January 15, 2016, GBPC revised their original rate application after having received “valuable input” from stakeholders.

There has been much opposition concerning the proposed 3.5 per cent rate increase. The Coalition of Concerned Citizens led protests and held town meetings, and submitted to the Port Authority hundreds of signed letters from residents and businesses opposing it.

Marco City MP Gregory Moss had also publicly expressed his disapproval and stressed that an approval should not be granted for any increase in the electricity base rate.

Mr Moss could not be reached for comments regarding the rate approval up to press time on Tuesday.

According to the GBPA statement, the new rate structure is returning the cost of electricity to rates that were last seen in 2008, and keeping the rate there for three years.

“All customers of GBPC are seeing their total (all-in) power bill decrease between seven and 12 per cent. We are pleased to advise that the proposed average base rate increase has been reduced from 3.5 per cent to 1.5 per cent, with 90 per cent of residential customers seeing a decrease in their base rate, which contributes to the increased savings on the total power bill,” said the statement.

The Port Authority stated that the greatest savings would be seen by low-income residents, with both a base and all-in decrease totalling a 12 per cent savings, and resulting in annual savings from $150 to $500, depending on consumption.

The company stated that commercial and general service large customers could also expect to see their total power bills decreased by approximately eight per cent and nine per cent, respectively.

The GBPA is confident that this revised rate will continue to promote future expansion plans, economic growth and job creation in the industrial sector, while saving customers from a rate increase.

However, Pastor Eddie Victor, of the CCC, has vowed to continue to press until there is a decrease in the rate in every single category.

“Our objective is to see it decrease in every tier of those categories. We believe the time has come to see a discount across the board,” he insisted. “If oil prices can come down by 72 per cent compared to July 2014, then we can see a decrease in the electricity rate.”

“They are increasing (the rate) by 1.5 per cent. Right now, the present rate structure they are charging is more than Nassau and rest of The Bahamas.

The more affordable it becomes to live in this country, the more people gone teef to get by.