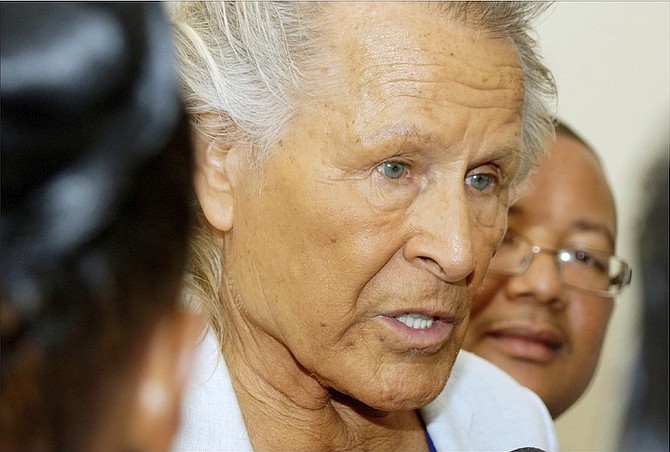 COMMITTAL proceedings concerning Canadian fashion mogul Peter Nygard are set to continue in the Supreme Court after the Court of Appeal yesterday rejected the Lyford Cay resident’s application to have a judge recuse herself from a contempt of court hearing.

Justice Rhonda Bain was asked to recuse herself from committal proceedings involving Mr Nygard through a notice of motion filed in the Supreme Court by his lawyer, Elliot Lockhart, QC, on the grounds of bias.

The motion also showed that Mr Nygard was seeking an order to stay all further proceedings against him pending the hearing of the motion.

However, in January, Justice Bain said Mr Nygard had not proved there was evidence of bias or apparent bias towards him and found the accusations to be “scandalous”.

The appellate court yesterday affirmed Justice Bain’s rejection of the application in an appeal of the decision by the Lyford Cay resident. A published decision is expected to follow.

On June 18, 2015, Justice Bain had ordered that Mr Nygard be present in court the next day for the committal hearing against him regarding the alleged October 2014 dredging at his Lyford Cay property and to determine whether he was in breach of an injunction against him.

Mr Nygard was served with the second motion outside the courtroom.

In a previous affidavit in support of Justice Bain recusing herself from Mr Nygard’s committal hearings on the grounds of bias, the Canadian’s former attorney Keod Smith stated that both he and his client took the position that Mr Nygard was ordered to remain in court that day “for the sole purpose of affording and/or facilitating” Fred Smith, QC, in serving the fashion designer with the legal notice, notwithstanding Save The Bay’s (STB) alleged numerous failed attempts to previously serve Mr Nygard with the documents.

In that affidavit, dated September 17, 2015, Keod Smith also claimed that neither Justice Bain or Fred Smith indicated to Mr Nygard or his lawyer that STB “had or was about to commence another contempt application.”

STB, formerly known as the Coalition to Save Clifton Bay, refuted Mr Nygard’s recusal application, arguing that it was “transparently calculated to delay the progress of the first committal application” against Mr Nygard.

STB’s battle with Mr Nygard over the construction/development activities at his Lyford Cay home stem from allegations that the activities have led to substantial growth of the property.

The group claims that the Lyford Cay resident has almost doubled his property’s size, from 3.25 acres to 6.1 acres, since he acquired it in 1984, by allegedly reclaiming Crown Land from the sea. The advocacy group has alleged that Mr Nygard achieved this without the necessary permits and approvals, claims that have been denied by the fashion designer.

That comes against the backdrop of Justice Bain’s ruling in 2013 that until the conclusion of judicial review proceedings challenging the legality of the construction of a groyne and the dredging of the seabed off Nygard Cay, neither activity could continue. However, since then, STB has submitted photographic evidence in court purporting that the opposite has happened.