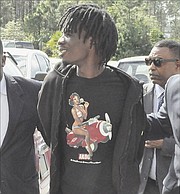 A Freeport man was charged on Monday with murder and causing grievous harm in the Freeport Magistrate’s Court.

Drexton Beneby, 22, of Frobisher Circle, appeared before Magistrate Debbye Ferguson and was charged with the murder of Johnson LaGuerre.

It is alleged that between February 20-21 at Freeport, the accused caused LaGuerre’s death.

It is also alleged that on the same dates, the accused caused grievous harm to Tyrone Davis.

Police prosecutor Berkley Simmons indicated his intent to apply for both matters to be removed from the Magistrate’s Court and proceed by voluntary bill of indictment to the Supreme Court.

Magistrate Ferguson told the accused that he was not required to enter a plea to the charges and that bail was denied. She remanded him to the Bahamas Department of Correctional Services until May 26, 2016.

Before the matter was adjourned, Beneby, who was not represented by counsel, informed the court that he had recently been shot five times and that one bullet is still in his body.

He then made a request to be placed in the Remand Centre instead of Maximum Security because he experiences pain in his right side from the bullet. He also told the magistrate that he is on medication for the pain.

Beneby also informed the court of his intent to apply for bail in the Supreme Court and requested documents, which were provided to him.

In other court matters, Sidren Gaitor, 37, of Seagrape, Eight Mile Rock and another man were charged with possession of an illegal firearm and ammunition.

Both men appeared before Magistrate Ferguson.

Gaitor pleaded guilty to the charges and the matter was adjourned to March 7 for sentencing.

The charges were withdrawn against the other man.