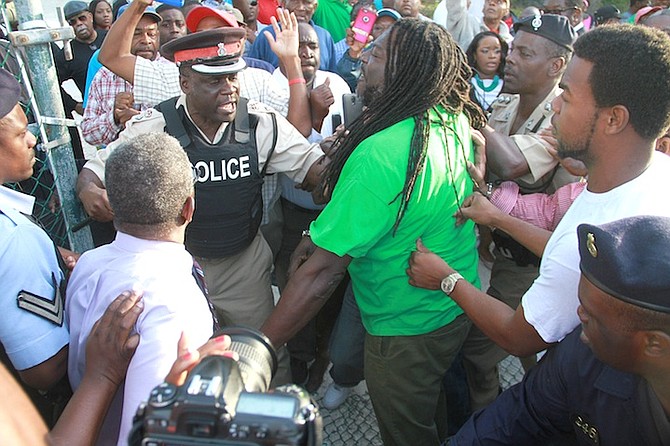 The chaotic scene at the entrance to Cabbage Beach on Tuesday morning.

DESPITE the prime minister’s assurance that he would “personally” work to find an alternative solution for vendors who were blocked from their regular access point to Cabbage Beach, more than a hundred protestors marched over the Sidney Poitier Bridge to Paradise Island and tore down the fence which obstructed the beach path.

Hours after the Christie administration released a statement through Bahamas Information Services (BIS), highlighting an agreement made between the government and the property’s owner granting temporary access to the beach over private property, demonstrators angered by the ordeal assembled at the foot of the Sidney Poitier Bridge.

The crowd, now in excess of 100 people - inclusive of vendors, taxicab drivers, activists, politicians and concerned citizens - were met by another group of officers at Cabbage Beach.

Demands to open the gate blocking the beach access quickly escalated to calls for the fence to be taken down all together.

As tensions rose, one protestor refusing to come to terms with access to the easement being granted temporarily shouted: “This fence needs to come down.”

Walking over to the fence, he added: “This entire thing needs to be taken down to give freedom to the hardworking Bahamians who depend on this beach to feed their families.”

That protestor then untied the steel binds used to hold the fence in place. He was quickly joined by more demonstrators who began to pull the fence, resulting in the entire thing being pulled down.

As the structure fell, cheers erupted. However, police on the scene attempting to take control of the ordeal clashed with demonstrators.

One demonstrator was struck on the hand as he pulled at the fence. Another protester was restrained by a group of officers.

Politicians and other senior public officials at the scene appealed to the crowd to diffuse the matter.

Dr Minnis told The Tribune that the government’s “eleventh hour push to temper the people” wouldn’t calm the hearts and minds of an exhausted citizenry.

“It’s a bit late, but what it shows is that there is still people power in our country,” the Killarney MP said.

Dr Minnis said the actions of the public over the last two days signals “a major shift,” suggesting that Bahamians have now concluded that a government steadfast on making promises is “simply no longer good enough.”

“We are not satisfied with just one segment of the fence removed. We want complete access; the fence must be totally moved so our people could have access. If you look here today you would see a complete representation of the entire Bahamas. This is not political, this is not PLP, this is not DNA, this is not FNM - this is about the people.

“This is the people’s time and with this demonstration people must understand and they have understood today; that once we stand together we will not allow Perry Christie and his government to walk over us again,” Dr Minnis said.

Mr McCartney lambasted the Christie administration, blaming the government for the issue escalating to the point where Bahamians were force to take to the street to protect their livelihoods.

“I blame the PLP government for not looking out for the interest of the Bahamian people. This is their example of believing in Bahamian people,” he said.

“This has nothing to do with politics. This not right for Bahamian people, this is not right for our country and it is a bad impression internationally for what has been done.”

In the statement released around 3am Tuesday morning, the government pointed out that the sales agreement between Access Industries and Brookfield (owners of the Atlantis resort) required Brookfield to close the easement in question and relocate the vendors’ access point to an area owned and operated by Brookfield located at Garden Drive off of Paradise Island Drive.

The statement also said that Access Industries had agreed to permit access to the beach path adjacent to the Riu hotel in response to a direct request from Mr Christie, to allow the prime minister time to work on an alternative solution for vendors.

There is a second access point to Cabbage Beach that is used by swimmers.

When contacted by The Tribune, Access Industries confirmed that they were working with Mr Christie to find a reasonable resolution to the ongoing dispute.

Ownership of Cabbage Beach was transferred from Brookfield to a subsidiary of Access Industries in 2014. In late November 2015, vendors were given written notice stating that the access would be closed at the end of December.

The vendors then went to court and were granted an interim injunction blocking the closure.

In January, that interim injunction was not extended.

Comrades no need pause whilst reading this story before it jumps off pages that it was well written with the skill of trained gutter journalism holding the reporter’s pen dipped in gutter ink.
How it slowly inserts just enough slickness to the story's copy pertaining to its true purpose, to discredit "Minnis's" successfully lead Cabbage Beach protest using gutter orchestrated journalism in the most aggressive way seen on these hereto pages in a long time.
Minnis I understand but I really wasn't expecting them to gutter clam up to come right out and throw bombs at Bran's greens the way they did.
If you fail to get Papa Hubert to return as red leader – what the hell - Loretta will have to be made to do, at least for the short-term.
Not that the media have ever supported the interests the Small-time Beach vendor business operator types.
You know what, now I thinks more about it – I’ve never once seen a paid Beach vendor's ad in a print bladder. Have you?
You soon come to know da souls of your two daily newspapers movers and shakers, by the company of the paid advertisers they keeps?
Comrades there is no need for Beach vendors to bargain with anyone to regain their beach access rights. A right that no media is prepared to acknowledged was interfered with. You have no rights when a damn fence separates people from their rights. A fence can’t be illegal to rip down, when it wasn’t legal to erect. Amen!

Since when has it not been the legal right of a private property owner to erect a fence, wall or any other edifice for that matter on their property? Since when has it become the illegal right of non licensed vendors or any other individuals for that matter to destroy,deface or vandalize said private property? I don't suppose for one moment that you would have any problem with people traversing your property on a daily basis and leaving their various offerings for you to dispose of in their wake? You probably wouldn't object to them breaking down your walls either to make their access a little easier would you? Where did I ever get the idea that you were a reasonably intelligent individual?

Comrade TheMessenger you have raised three issues of which I would like to respond to.
We are only talking about materials being ripped down that were used to block the guaranteed beach access of others.
The licensing of Beach vendors is a government matter, not that of a private land owner's.
You can not illegally destroy materials that were intentionally used to interfere with the rights of others.
Put the damn private obstructive fence back up and down it must come again, and again and again.

Doctor Minnis and Bran McCartney incited the crowd as far as I am concerned, They were given extensions and their extensions came to an end. They the vendors have a FNM lawyer who was no where in sigh. it would appear that the fence was legal and persons illegally tore it down. There is something called law and order..

BAMSI subtle signs were given eventually the building was burnt down. and there was great rejoicing among some.

And pray tell, what does YOUR government know about LAW & ORDER? You need to come out of your clam shell to see the real world sometime. Might do you good.

Birdie, be truthful, if it was Perry on P.I. with the vendors instead of Dr. Minnis, you would be fine with the whole affair. In you bird brain whatever the PLP does is right and whatever the FNM or DNA does is wrong, we understand your condition, it is called blind support. I hope I never become so close minded and self destructive. Enjoy your life in the one lane you have chosen, small person.

The demonstrators where wrong to take the law into their own hands and vandalize private property, the rule of law must be upheld. Minnis and Bran, if they where involved should be held accountable. Those that vandalized PRIVATE property should be arrested. There is beach access, always has been, fat people just do not like to walk. Also the vendors are a blight upon the beach and harass the tourist selling drugs, seen it with my own two eye's. No sympathy for them at all.

Comrade Asiseeit in case you haven't noticed, they sell illegal drugs in Rawson Square, Bay Street, dockside and in and around the hotels to the tourists. They're sold around PMH to the natives and yes, behind the guarded walls at Fox Hill Prison, yet you are not calling for fencing them off? What about the open selling drugs at our schools?

Tal, your plot sickens, not only are you advocating ignoring the rule of law but you would also appear to condone the sale of illicit substances, the fact that they're sold to natives as well as tourists doesn't justify it. Your argument only serves to further emphasize the level of depravity this society, and yourself by extension, has sunk too.

Comrade, a land owner, native or foreign matters not, can't just throw up their damn hands and say, "yes," I will block off access to the beach.
Shouldn't you and others be jumping all over the Commish of Policeman's for the way his uninformed policeman's aggressively mishandled legal protesters this past Monday morning?
Has the Commish not seen the media's pictures and videos, or does he believe they were all production staged and edited make his "law enforcement" officers look bad?
Not one PLP MP have spoken out against what was shared via pictures and videos?
Where in the hell were the always talkative to the media voices of Loretta, Richard L & Pintard?

I think Bahamians are masters at false equivalences. Are all vendors guilty of selling drugs? Are all jet ski operators rapists? Are all Bahamian vendors rude and belligerent? Are no Bahamians supposed to be vendors to tourists? I'm not debating the issue of the fencing here, but the issue of Bahamians in the tourism industry.