The Claims Against Peter Nygard Made In Court Documents 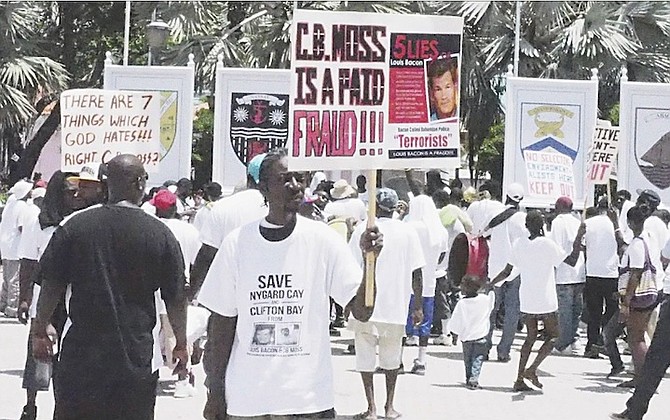 One of the pictures posted to Facebook of the Nygard support march in July 2013 showing a protestor holding a sign making accusations against CB Moss.

The activists who were reportedly targeted

Fred Smith is a managing partner of the law firm Callenders & Co, President of the Grand Bahama Human Rights Association, and co-founder, director, spokesperson and legal counsel to Save The Bays.

Louis Bacon, a billionaire hedge fund manager and environmentalist, lives in Lyford Cay on a property adjacent to Mr Nygard. The neighbours have been embroiled in an ongoing legal feud over the alleged environmental damage done by a seabed dredged at Nygard Cay. Mr Bacon is the director of Save The Bays.

Romauld Ferreira is an ecologist and counsel and attorney employed by Ferreira & Company. He is a director and legal counsel of Save the Bays.

C B Moss is a pastor and anti-crime advocate. He is the pastor at Mount Olive Baptist Church and Executive Director of Bahamas Against Crime, a community-based volunteer organisation for the residents of The Bahamas to help tackle crime. Mr Moss is a member of the Clifton Heritage Authority, and founded “The Coalition to Save Clifton”, an organisation that campaigns for the creation of a Clifton Marine Park. The coalition has staged a campaign to prevent Mr Nygard from allegedly benefiting from illegal Crown Land-reclamation through dredging.

DOCUMENTS filed yesterday with the Supreme Court purport to show that Peter Nygard masterminded a two-and-a-half year campaign of harassment, intimidation and violence in the Bahamas, including entering into a conspiracy to murder prominent local attorneys Fred Smith and Pericles Maillis, American investor and philanthropist Louis Bacon and Tribune Business Editor Neil Hartnell.

The evidence suggests, among other things, that Mr Nygard was responsible for:

• several Ku Klux Klan-themed hate rallies in Nassau which targeted Mr Smith, Mr Bacon, Rev C B Moss and others; the firebombing of Rev Moss’ car along with other acts of violence;

• the torching of a local shop owned by a former girlfriend of Nygard’s; and the hiring of two local criminals to carry out the murders of several individuals on a ‘hit-list’ provided by the Canadian fashion mogul.

• The details are disclosed in sworn statements by Nygard’s former associates and video and audio recordings of meetings between Nygard and criminals Livingston “Toggie” Bullard and Wisler “Bobo” Davilma, filed yesterday as part of a lawsuit brought by five plaintiffs - Fred Smith, Louis Bacon, Rev C B Moss, Joseph Darville and Romauld Ferreira.

According to the court documents, Mr Nygard’s campaign began following a 2013 judicial review action filed by Save The Bays, which resulted in a court order, still in effect, preventing Mr Nygard from dredging or building on his property, Nygard Cay, until the matter is resolved.

Among the allegations are:

April 2013: Fred Smith alleged he was surrounded and attacked on Jaws Beach by Keod Smith and six other men armed with various makeshift weapons, including crowbars, before managing to flee in his car.

July 2013: Mr Nygard was said to have instructed Mr Bullard and Mr Davilma to “send a message” to Rev Moss. In return for a cash payment of $20,000 from Nygard, they poured gasoline on the car, then set fire to it.

July 2014: A highly-publicised hate rally by a “rent-a-crowd” in downtown Nassau was composed of several thousand young Bahamian men carrying placards and wearing T-shirts with derogatory and defamatory descriptions of the plaintiffs. According to Mr Bullard and Mr Davilma, Mr Nygard paid them a total of $230,000 to arrange for this crowd, provided the placards and the T-shirts and each participant in the rally was paid $25.

July 2014: Mr Ferreira testified that several days after this rally there was a break-in at his law office, followed by acts of vandalism at his home and confrontational verbal attacks on the street which included explicit death threats. Despite four separate requests to the police by Mr Ferreira, no authorities investigated the acts of vandalism against him, and no meaningful action was taken to investigate the source of the hate rallies despite four letters written to the police by Fred Smith over seven months.

January 2015: A hate rally took place during the annual New Year’s Day Junkanoo parade on Bay Street and Mr Nygard is alleged to have worked through Keod Smith to arrange for the payment to the protestors, who were provided with placards and clothing mimicking that worn by the Ku Klux Klan, intimating that the plaintiffs support the hate group. In all, four hate rallies or protest are referenced.

A former Nygard employee, Justen Sands, also provided evidence in an affidavit about Mr Nygard and his desire to “deal with” Mr Bacon.

The court papers also detail an alleged retaliatory attack ordered by Mr Nygard against the fashion business of his ex-girlfriend, Philincia “Philly” Cleare, in Wulff Road and burnning it down in 2014 to frighten her and try to stop her publishing an online article about scandals at Nygard Cay.

According to sworn testimony, Mr Nygard also ordered Mr Bullard and Mr Davilma to kill Mr Hartnell. Mr Bullard testified that he left a phone message for The Tribune Business Editor, threatening to kill him if he continued to “f* with my boss” and, according to them, Nygard paid them each $20,000.

The two further testify that they were promised a large sum of money to kill Mr Maillis, who has acted for Louis Bacon in relation to property matters in The Bahamas. They claim they conducted surveillance of Mr Maillis, staking out his office and following his car. In early 2014, their testimony reports that a botched attempt on Maillis’ life took place on or near Shirley Street when Mr Bullard and Mr Davilma “bumped” what they thought was Maillis’ car from behind with their vehicle, with the intention of shooting him when he got out to investigate. They claimed they intended to shoot Mr Maillis with two 9mm pistols purchased for this purpose with money provided by Mr Nygard. However, Mr Maillis did not get out of the car and there were too many people around to carry out the plan.

The court papers also reveal that a man named Clement Chea went to Mr Maillis’ office on September 9, 2015, and met his staff. Mr Chea pulled out some Nygard International stationary, pointed to his name and the written amount of $10,000 and said he had been hired by the Canadian to kill Mr Bacon and that the $10,000 was a down payment.