Paid Thugs Claimed To Have Close Links To Deputy Pm 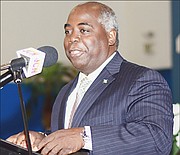 In their sworn affidavit, Livingston “Toggie” Bullard and Wisler “Bobo” Davilma allege that they were hired by Mr Nygard to threaten Director of Physical Planning Michael Major. Mr Bullard and Mr Davilma said they gained access to Mr Major’s office because they had a close relationship with Mr Davis.

The men said they were told that it was Mr Davis who called Mr Nygard to tell him that they had threatened the director, which served as confirmation that they had completed the job. According to their affidavit, the men were paid $5,000 each.

The incident is part of a string of allegations detailed in court documents as the findings of an investigation paid for by Save The Bays directors Louis Bacon and Fred Smith into the claims of Mr Bullard and Mr Davilma.

Also among the victims that the pair claim to have harassed on behalf of Mr Nygard are Tribune Business editor Neil Hartnell and attorney Pericles Maillis.

Mr Bullard and Mr Davilma said they were hired by Mr Nygard to kill Mr Hartnell but did not go through with the plot because they wanted to be paid first. Instead, Mr Bullard said he called and left a threatening message on Mr Hartnell’s voicemail at The Tribune. In a separate affidavit, Mr Hartnell confirmed that he received a voicemail in which the caller threatened to kill him and claimed to know where he lived and what car he drove.

Mr Bullard alleged that he and Mr Davilma were paid $10,000 each by Mr Nygard because he said that Mr Hartnell stopped writing offending press reports.

The pair further alleged that they were promised a large sum of money to kill attorney Pericles Maillis but were unsuccessful. Mr Maillis has represented Mr Bacon in property-related matters.

The allegations are part of a lengthy writ against Mr Nygard and attorney Keod Smith filed in the Supreme Court yesterday.

Save The Bays directors Joseph Darville, Romauld Ferreira, Mr Smith and Mr Bacon and Reverend C B Moss allege that the defendants orchestrated a campaign of fear and violence to “kill or scare off” activists he saw as opponents to development plans for his Lyford Cay property.