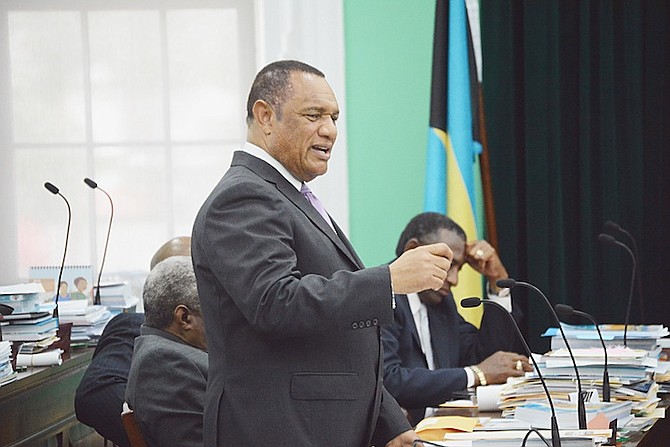 CLICK HERE for the court documents with links from the contents pages.

PRIME Minister Perry Christie allegedly promised Canadian fashion mogul Peter Nygard that he would issue him a lease to build on government property, according to court documents.

Mr Nygard is purportedly shown expressing frustration over Mr Christie’s failure to make good on his assurances in a covert video recording included in court documents as the findings of an investigation paid for by Save The Bays.

Central to the allegations are the claims of Livingston “Toggie” Bullard and Wisler “Bobo” Davilma, who claim that Mr Nygard paid them to harass the organisation and commit criminal acts.

In a video recording on May 10, 2015 between Mr Nygard, Bullard and Davilma, the fashion mogul lambasts Mr Christie for making “fake promises” over the issuance of a lease for which he had received authorisation nearly 25 years ago.

“The PM is supposed to issue this lease,” Mr Nygard said. “There’s nothing to hold him back from issuing the lease that they have now promised for 30 years for me to have built on government property. They gave a letter of authorisation almost 25 years ago. They said they were going to send me a lease. They never did.”

Mr Nygard said: “There’s no f*in reason it should take this long and keep making these fake promises and promise after promise. He was very distant because he was embarassed about meeting me, you know?”

The Canadian further claims that Mr Bacon’s campaign is intended to block the issuance of the lease and related work permits until the next election – adding that if there was a change in government the matter would not go through.

Mr Nygard said: “[Mr Christie] He’s got to do it right now. That’s the push. That’s the push everyone’s presumably having. Brave is having. Shane Gibson’s having. You guys are pushing him. I’m pushing him and this push has to intensify now this week.”

Responding to assertions by Bullard that the Progressive Liberal Party needed his sponsorship, Mr Nygard said: “Yeah, they’re f*ed because no one else is gonna do it.”

Mr Nygard replied that Craig Flowers, CEO of the FML Group of Companies, had also been a major sponsor, but was now “pissed off” with the Prime Minister for breaking every promise he made to him.

In another meeting with the men on May 12, Mr Nygard said he was close to leaving the country because he felt the Prime Minister was wasting his time. Mr Nygard said: “I’m not putting this shit here now (Stem Cell facility) I pissed away $5 million. Since the PM got me involved its cost me five (expletive) million dollars of bullshit shit.” He talks about a $100m investment in a stem cell facility in St Kitts and meetings with the Prime Minister there.

The court documents also reveal surprising details concerning the close relationship between Mr Nygard and the governing Progressive Liberal Party (PLP), with the fashion mogul repeatedly referring to his considerable influence over top government officials and the two criminals, Bullard and Davilma, referring to conversations they have had with the Prime Minister and Deputy Prime Minister.

In the May 12 video Mr Nygard talks to them of coming from a meeting with Deputy Prime Minister Philip ‘Brave’ Davis in which he says “everybody is frustrated with the PM” over the hold up over the lease. “He’s holding up that f*ing lease, which could unravel every God damn thing with Bacon ... he’s just holding back on that damn thing, for whatever reason it’s mysterious. I’m gonna have a meeting with him tomorrow and lay down the law to him.”

Mr Nygard expresses his concerns over a Save The Bays campaign in the press focusing on corruption and crime in which he and the Prime Minister are linked visually. “It’s a very carefully orchestrated programme that’s coming at an ever-increasing pace you know. And meanwhile ... Christie was already supposed to start his political campaign going, you know, as of May 1st, you know, and due to some of this stuff - because the campaign’s on now, f*ing political campaigning going – and this is the start of their (Save The Bays) fing campaign to take down the key guy who’s the financier of the whole fing PLP party, take him down first, you know? Tie them together. Tie me into corruption, tie me into intimidation, tie me into getting contracts out for his (Bacon’s) life you know?”

Mr Nygard tells Bullard and Davilma “I think we’re all united in an issue that puts huge pressure on PM now from every fing Cabinet minister from Gibson, Shane, you guys, everybody. Without you guys and me they lose the election as you have control of the field and I have control over the fing finances you know.”